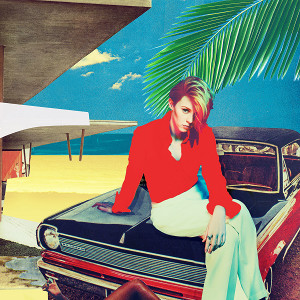 The first image that springs to mind when La Roux is brought up is her narrow-eyed, sharp-quiffed march through the video for 2009’s ‘Bulletproof’. Elly Jackson’s stride was the constant forward motion against a shapeshifting landscape, just as her crisp falsetto was a straight-forward motion amongst a backdrop of zig-zagging ’80s synth lines. Together with her songwriting partner Ben Langmaid, Jackson shook up pop that year.

That’s the primary image of La Roux that comes to mind because, in the five years since, Jackson has been near invisible. She drifted personally and professionally apart from Langmaid; developed panic attacks in response to fame and lost her trademark voice to muscular tension. On her solo follow-up Trouble In Paradise, which has been in the works for five turbulent years, the actual substance of her music has been re-shaped by anxiety: she’s toned down the electrical surge of her falsetto, hitting a lower register with less angular melodies. The absence of Langmaid is strongly felt in the richer tropical hue (as well as embittered lines like “you’re not my partner, no you’re not a part of me”).

But La Roux sill strides. On Trouble In Paradise’s opening track ‘Uptight Downtown’, a soaring falsetto chorus and funky propulsive rhythm show Jackson’s as much on a bulletproof mission as ever. The La Roux of 2009 is totally intact, complete with the characteristic disdain that leads her to ruminate in interviews about why she doesn’t have any famous friends, as she bites her way through lyrics about people wanting to “move, move, move” with the observation that they probably have something to “prove, prove, prove.” There are plenty of these moments: the bizarrely titled ‘Sexotheque’ has a chorus that calls out seedy men with all the clap-along joy of a ’60s girl group, while ‘Silent Partner’ is a violently upbeat rally cry. And yet, these tracks are cut through with a more sombre introspection than La Roux has shown before: the latter deals with the search for internal peace at night, begging for silence even as it builds frantically to the most crammed musical moment on the record.

Vocally, La Roux takes a back seat on tracks like ‘Tropical Chancer’, letting her voice glide from the bottom of her chest over the steel pans and funk guitars that carry the track’s punch. She’s never felt more like a wallflower, but nor has she ever said such arresting, attention-grabbing things. Take ‘Paradise Is You’, another track that goes so hard for ’80 beach vibes that if you closed your eyes while listening you might wake up in Club Tropicana. Even as she’s telling the song’s subject that they’re all that’s good in her life, Jackson’s vision of paradise becomes oppressive: “darling, it’s only you who can stop my heart from crying.”

Throughout Trouble in Paradise, Jackson questions who she is and what she’s doing. Sexuality is cruel. “Turn me into someone good, that’s what I really need,” she pleads on ‘Let Me Down Gently’, “tell me that I’m someone good so that we’re not so far apart.” And yet this is cushioned by mellow sustained chords and choral sighs that waft slowly like palm tree fronds in the breeze.

Back in 2009 La Roux was the pop album that a socially anxious person might put on when getting ready to go out; a steel mask of defiance, “going in for the kill” with its piercing falsetto and unrelenting sharp edges. For the same person, Trouble In Paradise might be the album to listen to when they get home, chewing over everything that just happened in that sleep-deprived half-dreaming state. It’s all set to give you a pep talk, but it’s not full of front: it will comfort you with visions of a tropical paradise, but won’t bullshit you when it comes to feeling afraid or uncertain, allowing those feelings space to breathe rather than squashing them with titanium production. This is where Langmaid’s absence is most obviously felt, and where the album slowly but surely astounds: in its moments of silence, of poignancy and detail. La Roux’s march may has slowed to a stroll, but she proves here that she can captivate at any pace.