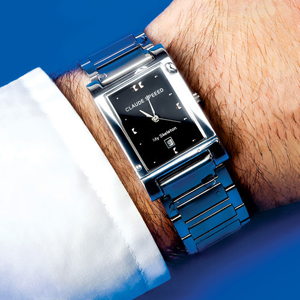 For Stuart Turner, the road to My Skeleton has been long and winding. Edinburgh native, Optimo regular, DJ, Red Bull Music Academy graduate, refugee from rock groups such as Degrassi, Russia and American Men, and for a short period a trainee corporate lawyer, much of Turner’s debut album as Claude Speeed was sketched out on a guitar and laptop while he was travelling through India, Singapore and Cambodia.

Subsequently, this material was refined and mixed at locations including Hudson Mohawke’s studio in London and Kuedo’s studio in Berlin, but it would be wrong to assume My Skeleton was in any way designed for club consumption. Instead, Turner’s recent FACT mix – which eschewed beats in favour of twinkling drifts and droning computer music – offers a useful signpost to My Skeleton’s contents. Present here is the fluorescent synth glow and ADHD maximalism that’s common to his peers on the LuckyMe roster, but what’s within is on a dreamy, ambient tip, melding classical minimalism, post-rock, kosmische synth and systems music with an eye for personal exploration and spiritual reflection.

Contemporary readings of such genres sometimes feel like the stuff of battle re-enactment, too studied to transcend their rich histories. On My Skeleton, though, Turner often takes pains to keep his music feeling living and breathing. ‘Tiger Woods’ and ‘Spectral Choir’ employ dancing Steve Reich patterns, but through these Turner laces weaving woodwind and ringing strings with half-heard field recordings from his travels, the bustle of a marketplace or the hum of traffic. There are songs, too: the melancholic twinkle of ‘Hold On’, featuring the folksy tones of female vocalist LW; or ‘Taj Mahal’, in which Turner takes the mic in a manner that reminds me a little of Phil Elverum’s work in lo-fi experimentalists The Microphones, his sleepy and sincere words half-buried under droning soft synths and starbursts of heavily treated post-rock guitar. The title track breaks from the record’s largely electronic recreations to employ a real string quartet, although thanks to pitch-shifting and diligent layering, there feels like no hard breaks between the real and the synthesized.

There is trauma here, too, albeit sublimated into these woozy folds of sound. Turner’s trip was prompted by bereavement, and here and there My Skeleton takes a turn into darkness. The doomy post-rock build of ‘Prove You Exist’ apparently went by the working title of ‘Claude Speeed You Black Emperor’, while ‘Some Other Guy’, which vacillates between diaphanous ambience and harder Mego-like drones, is supposedly inspired by a visit to a tower of human skulls in Cambodia’s Killing Fields. In the hands of some, this might come across slightly glib, a bit selfie-at-Auschwicz, but throughout My Skeleton, there’s the sense that Turner is out to honestly communicate his own experience, even when emotions are embryonic, or sensations twisted by tiredness or fever. The result is a record that keeps the sense of a human being on a passage of exploration, its internal emotional landscape porous to the influence of the tumult and chaos of the world outside.