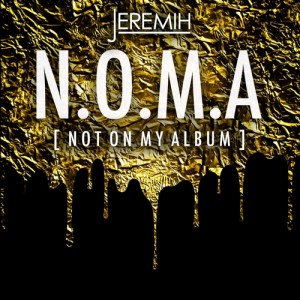 There’s approximately one person in existence who believes that ‘Birthday Sex’ is the apex of Jeremih’s artistic achievement so far, and that person found their way to the comments on FACT’s review of Late Nights With Jeremih back in 2012. Johnny D aside, most critics found agreement that they’d never heard, nor expected to hear, a release of such flexibility and imagination from someone who had previously churned out unremarkable radio bait on his first two studio albums. Over a marathon run of 18 – count ‘em, 18 – tracks, Jeremih’s landmark 2012 mixtape found enough different ways to seduce the listener that it was playing on a loop long after ‘Birthday Sex’ had faded from collective underground memory. He may have yet to make the same impact in sales figures, but Late Nights gave hope that he was gearing up for a sprint to household name status with the filthy, scatterbrained humour and athletic vocal leaps of R. Kelly.

Which brings us to this week, and the release of the mixtape’s long, long-awaited follow-up N.O.M.A. The tape is called Not On My Album, which has the immediate effect of getting pulses racing for a peek at what the singer’s been working towards all this time, and getting pulses flattened at the realisation that this is essentially a collection of scraps from the cutting room floor. After several plays, it remains such a lukewarm and slight listen (at seven tracks this time) that it’s still difficult to determine whether or not this title was meant as some kind of disclaimer for just how safe and stodgy these tracks are.

There are some moments of the casual elegance that Jeremih channels so effortlessly that send chills: on ‘Wake Up’, Big A provides the most interesting production flourishes on an otherwise predictable tape, using pitched-up Aaliyah samples to give an alien counterpart to Jeremih’s lothario groove and providing real luxury in the oozing bass and lush layers on the hook “I got somethin’ for ya, baby, turn up”. Elsewhere, the production is generally capable but not star-making; there’s no ‘773 Love’ moments to rival Mike Will, only tracks that keep things steady with an easy shuffle (‘Chillin’ or ‘4 The Freaks’) and two Soundz productions that – even though there’s only seven tracks in total – sound near-indistinguishable from one another. On the whole, ‘Wake Up’ provides one of the few moments of wakefulness on a set of R&B tracks full of lethargy, the sex appeal going about as far as Juicy J threatening to do you until you’re “paraplegic.”

Vocally, Jeremih spends the majority of the tape cooling his heels comfortably within an easy register, rarely feeling stretched (and occasionally even feeling lazy) on his vocal takes, looping lyrical tics to the point of irritation where he once would have chewed over them like strawberry bubblegum. His melodies are silk-soft and far from unpleasant to listen to, but “far from unpleasant” is such a disappointment after the thrills and twists of Late Nights: those “ooh ooh ahh ee” coos on ‘Rosa Acosta’; those squeaky inflections sliding around in all that reverb on ‘All Over Me’; that faultless, breathless falsetto on ‘Rated R (The Masterpiece)’. I’d go as far as saying I didn’t enjoy a single vocal performance more in 2012 (with the possible exception of Channel Orange), and it’s testament to how large the shadow of that mixtape still looms that so much of this review has been taken up by a love letter to it. Lyrically, compare the playful limerick that was Late Nights’ opening line, “Rosa so wet, get Rosa a coaster” with this mixtape’s “thousand different ways to get paid,” a line that’s repeated thousands of unnecessary times before the first track ‘Get Paid’ limply fades out. Put simply, N.O.M.A. has none of the sense of adventure that made Jeremih so exciting two years ago.

All of which casts the decision that Jeremih announced this week, to re-name his upcoming debut album from Thumpy Johnson to Late Nights: The Album, in troubling new light. Is the R&B underdog out of ideas? Will Late Nights With Jeremih go down in history as the best thing he ever achieved – or worse, in the eyes of corporate spreadsheets, will that honour go to ‘Birthday Sex’? As Al Pacino says in the sample from The Devil’s Advocate that opens N.O.M.A., “Pressure: it changes everything.”

On the back of a rogue-ish, sharp-edged cameo on the infectious hook to Tink’s ‘Don’t Tell Nobody’ and a blissfully lean EP with Shlohmo, it seems safe to bet that there’s a chance Jeremih might be holding back a few more surprises yet. The best we can hope for is that N.O.M.A. is made up of the tracks that weren’t experimental or downright fun enough to make the cut for an album that channels the same seedy soul as Late Nights; until we find out, I can only recommend that Johnny D listen to ‘Rated R (The Masterpiece)’ a few times while I keep my fingers crossed.