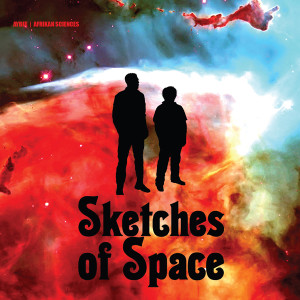 Few house producers are as steeped in afrofuturist rhetoric as Aybee and Afrikan Sciences. From the titles of their records (the former’s debut LP was called East Oakland Space Program) to their cited influences (the latter sings the praises of sci-fi novelist Octavia Butler), both seem keen to align themselves with a lineage extending beyond Ron Hardy and the Muzic Box to Parliament Funkadelic, Sun Ra and so on. This is not so much deep house as deep space house, ditching the reactionary entreaties to “soulfulness” in favour of rigorous explorations of the unknown. It may not be the most accessible approach, but across a pair of sprawling discographies – often housed on Aybee’s Oakland-based Deepblak label – it has yielded plenty of brow-furrowing delights.

These details in mind, it’s not difficult to guess at the conceptual thrust of the pair’s first collaborative album. Sketches of Space is billed as an homage to that quintessential African-American modernist, Miles Davis; its title and artwork propel a lushly orchestrated Gil Evans-era classic into the cosmos. The producers insist that they’re not riffing on any Davis album in particular, but their sights are clearly set on electric Miles, whose flirtations with electronic instruments and open-ended groove structures would lay the groundwork for the crossover success of Herbie Hancock et al. Here, contemporary equipment is turned to similar ends. Techno is a presence, but a buried one; the angular melodics and twitchy grooves prefer loose-limbed implication over dancefloor directness. Improvisation, not painstaking composition, reigns supreme.

It’s a risky approach. After all, the dance music climate, prizing functionalist discipline above all else, isn’t always hospitable to long-form experimentation. These extended jam sessions, executed over three years between Oakland and Berlin, certainly test the patience at points. Dominating the record is the three-part ‘Deep East Suite’, a 38-minute exploration of a single, slow-burning groove. In the first section you can observe the pair constructing the track in realtime, trying and discarding several ideas (a lonesome bass guitar lick here; a bit of exploratory tom-tom there). Things pick up as layers of pungent synth are daubed over the mix, and sections two and three stride ever more purposefully. Still, a bit of editing would surely have enhanced, rather than obscured, the effect.

Things improve as the cuts become briefer. The two parts of ‘K-Fetisch’ relate through contrast rather than continuity; both are, in their own ways, closest to the soured Rhodes clusters and hip-winding grooves of fusion-era Miles. If the wailing guitar-like sounds in part one prove a bit much, then the sparser pointillism of part two should come as a breath of fresh air. Finally, the baleful ‘Knew What’s Coming (Sculpture)’ might be the best of the lot. As elsewhere, its slouching, not-quite-anything groove bears the fingerprints of Afrikan Sciences. Sketches Of Space never quite accesses the fascinating interzones explored by that producer in his solo work – nor the slicker environs of Aybee at his best – but it remains a fascinating exploration of the things these two artists have in common.