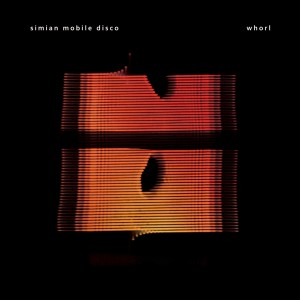 New rave, for the most part, was a bunch of indie groups taking on the iconography of dance music, but not the sound or instrumentation. For James Ford and Jas Shaw, though, it seems to have been an impetus for change. After dissolving their indie group Simian, they decided to make a go of their remix alias Simian Mobile Disco, the pair’s 2007 debut Attack Decay Sustain Release a contemporary and accessible take on house and electro that was, in its investigations of analogue sounds and banging drum machine patterns, if anything slightly ahead of the curve.

By and large, SMD have tilted towards the mainstream, employing a string of guest vocalists – Beth Ditto, Hot Chip’s Alexis Taylor, Ninja of The Go! Team – to appeal to a broad constituency, with generally mixed results. Their techno imprint Delicacies, though, confirms the pair to be men who know their shit, and on new album Whorl, they’re clearly following their more contrary impulses. Disposing of their computer and paring things down to bare essentials – two modular synths, two sequencers, a mixer – the pair jetted out to Pioneertown, a former Western film set turned functioning small town deep in the Mojave desert to make a trippy neo-kosmische hardware jam, surrounded by cacti and coyotes. And why not?

Whorl consists of music from three locations: preliminary recordings made at their hotel, Boulder House; a live show in front of an invited audience at Pioneertown’s bar, Pappy & Harriet’s; and a bit of stuff recorded out in the desert running off generators. Despite this, it’s not a live album exactly – there is no crowd noise, and certainly no conscious crowd-pleasing – but the recording feels spontaneous and live-generated, the pair crafting long, shimmering analogue synthscapes and raw percussion workouts, free to pursue tangents wherever they appear. ‘Hypnick Jerk’ and ‘Nazard’ bring to mind Luke Abbot and James Holden in their command of raw melody, their mixing of the rigid and fluid. Mid-70s Tangerine Dream is also a reference point, the bits without guitars at least, the likes of ‘Dandelion Sphere’ excursions in slow synth terraforming, while the gentle burble of ‘Casiopeia’ nods to quizzical library music. By and large, though, you feel Ford and Shaw are less interested in gesturing to a broader universe of synth music, and more into exploring the qualities and quirks of a stripped down hardware set-up.

Perhaps a lack of pretention works against them in certain ways. Seeing photos of the pair crouched amongst desert rocks, tending to a colourful thatch of patch leads, you might imagine Whorl to be a pure peyote bliss-out. Those moments never really materialise, save perhaps for on mid-album interlude ‘Z Space”’ a cut of delay-soaked melodies and cosmic drones that could easily see the light of day on, say, Spectrum Spools. Elsewhere, it’s solid, proficient, fun – not quite transcendent, but, the sort of left turn that feels natural and uncontrived.