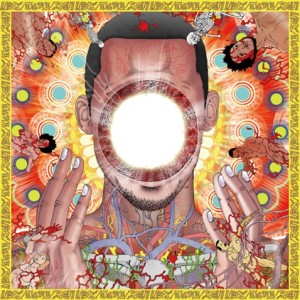 In 2010, I interviewed Steve Ellison on the eve of release of Cosmogramma, his third full-length as Flying Lotus. A heady “space opera” that poured the likes of saxophonist Ravi Coltrane and bass supremo Thundercat over Ellison’s blunted, Dilla-ish beatscapes, it shifted the Flying Lotus project into new territory. “At the beginning of making Cosmogramma, I didn’t have the confidence to even work with musicians,” he grinned, “but working with Thundercat really helped me communicate my ideas… it’s started to happen.” It didn’t take long for Ellison to get into the swing of things: at the ICA that August, he presented Infinity, a one-off that placed him very much on the sidelines, hunched over a laptop, as an ensemble of expert players rendered the album as expansive experimental jazz.

You can understand Ellison’s original reticence to head down such roads. The great nephew of Alice Coltrane, he grew up surrounded by the star-crossed end of the Californian jazz fraternity; a scene no doubt kind of intimidating, for a kid with Slum Village and Doggystyle in his headphones. Come fifth album You’re Dead!, though, it’s clear that Flying Lotus has long since left behind the ambient, sun-damaged hip-hop of 2008’s Los Angeles in search of something more orchestrated and spiritually nourishing. Boasting a cast list including names like Herbie Hancock, Ennio Morricone and the tenor saxophonist Kamasi Washington, and housed in a eye-watering psychedelic sleeve by Japanese guro manga artist Shintaro Kago that appears to contemplate the death of the ego, it’s a rumination on mortality and an elegy to lost friends that finds Ellison deep in both the sound and the iconography of jazz. An opening triple whammy of ‘Theme’, ‘Tesla’ and ‘Cold Dead’ kick things off in a blaze of virtuosity, their silky chords, hopping fusion basslines and spills of snare pointing out to the wilder sides of jazz fusioneers Mahvishnu Orchestra or Weather Report.

As impressive as this sort of music is as a straight technical accomplishment, I hope I’m not alone when I say that I find it all a bit aimless in the long term. Still, You’re Dead! finds ways to keep things pumping. However organic the likes of ‘Turkey Dog Coma’ and ‘Coronus, The Terminator’ sound, you can still hear Ellison’s fingers at the MPC, tapping out robustly funky rhythmic layers. Present too are a number of guest spots that, rather than grandstanding ego moments, feel conducted entirely on Ellison’s own terms. There’s Kendrick Lamar on ‘Never Catch Me’, bringing his breathless chatter to thoughts of mortality, the afterlife and out-of-body experiences, before Thundercat brings it home with a burst of bass gymnastics. The wonky chip-tune hip-hop of ‘Dead Man’s Tetris’ finds Ellison in his Captain Murphy alter-ego, rapping how he “don’t need no body/we bouncing on that astral plane” through a cacophony of cartoon samples and automatic weapon fire, before Snoop Dogg pops up for a swift verse seemingly designed to make the most of his slithery, slippery cadence. ‘Siren Song’, meanwhile, is a twinkly interlude graced with the presence of former Dirty Projector Angel Deradoorian, whose wordless vocalisations layer into a celestial chorus.

Herbie Hancock is deployed twice, once on ‘Tesla’ and again on deeper album cut ‘Moment Of Hesitation’, a lush swoon of strings, fluttering sax and honeyed keys that is perhaps the album’s most straightforward jazz cut. By this late stage though, I’m finding myself a little more taken by the album’s more synthetic, electronic constructions – the bubbling synths and microscopic glitches of ‘Ready Err Not’, or the loping ‘Eyes Above’, which harks back to Los Angeles’ humid, smoggy drift. It’s not so much that I want Ellison to look backwards – over the years he’s certainly come on in leaps and bounds, with each album showing new techniques and embracing new modes of expression. But if I have a criticism of You’re Dead!, it’s that in its search for big cosmic truths, it rather downplays Flying Lotus’ hip-hop side. A little more of the obtuse humour he displayed on last year’s Captain Murphy mixtape Duality, or a meeting of beats and rhymes as tight as that 2012 Earl Sweatshirt collaboration ‘Between Friends’, would make it pass by all the smoother. Still, at a tight 37 minutes it doesn’t hang around – which, given the theme, is fairly appropriate – and to hear any artist grappling with such heavy questions without tunnelling right up their own arsehole is a pleasure worth noting in itself.