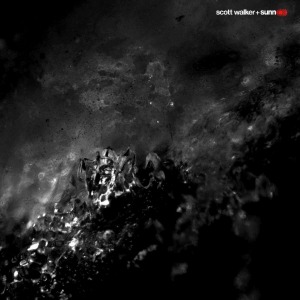 A collaboration between Sunn O))) and Scott Walker seems so apt that the biggest surprise is that it’s taken this long to come about. In fact, Sunn O))) approached the singer to appear on the 2009 album Monoliths & Dimensions, but were refused, Walker instead choosing to write an album with the group in mind. On paper, there’s something unexpected about the pairing: Sunn O))), the group whose rotating cast of members has always included Stephen O’Malley and Greg Anderson at its core, have expanded the doom metal blueprint far beyond their original, Earth-indebted sound. Scott Walker’s unique trajectory over several decades, meanwhile, includes chart-topping crooner pop during his tenure as one third of the Walker Brothers, four exquisite self-titled experimental pop albums, and finally avant-garde music proper – although an experimental streak has always coursed through his solo work. Yet, their fundamentally different paths notwithstanding, both Walker and Sunn O))) have long worked towards mounting the challenging and extreme qualities of their music, and over the years have inched sonically closer to one another, so that epithets commonly thrown in one’s direction – “bleak”, “theatrical”, “challenging” or “monumental” – could just as easily apply to the other.

Sunn O))) are hardly strangers to the collaborative LP, having released albums with Nurse With Wound, Boris and Ulver, records where, by and large, the groups richly supplement each other’s core sounds. Soused, then, is something of an unusual prospect; rather than aiming for the sweet spot between the collaborators’ sounds or the best of both their worlds, it sounds more like a natural culmination of Walker’s avant-garde phase. Which is not to say that Sunn O))) play a secondary or backing role to Walker on these lengthy tracks. Their stamp is all over Soused from the first slabs of distorted guitar on opening track ‘Brando’. The menacing tone that pervades later Walker records – think of the intense desolation of Tilt – is still present and correct, but Sunn O)))’s instrumentation broadens and deepens it, adding grim ballast to Walker’s vocalisations in all the right places.

While of a piece with the complex sound of Monoliths & Dimensions, where riffs writhe and flicker rather than droning on, there’s also a keen attention to space in Soused’s five compositions, so that even as ‘Herod 2014’ scrapes and clatters, Walker singing, “No hiccuppy silence to finger their traces / No colicky moon shines bright pain on their faces… I’m closing in”, it seldom feels claustrophobic. The gut-churning low end is the perfect foil for Walker’s voice, which tends towards high drama so impassioned it could almost be mistaken for caricature.

Not that there’s anything light-hearted about Soused – Walker’s sense of humour is as grotesque as it’s ever been. Take ‘Herod 2014’, with its refrain, “She’s hidden her babies away” and the lines, “No ‘raindrops on roses’ / ‘Whiskers on kittens’ / They refuse to be blinded by Rubens or Poussin / They’ll hardly be boarding the 12:10 to Tucson”. The lyrics of ‘Fetish’, too, are typically vivid, Walker’s voice soaring above the dense weight of blackened riffs, trebly drones and slashes of feedback to conjure up images of “spunk-stiffened tresses” and feathers matted with blood, as intense and lurid as anything on The Drift.

The arrangements are every bit as forceful as the vocals. ‘Bull’, one of the standout tracks, towers and subsides with titanic scope, ratcheting up the intensity with a “bump the beaky” refrain and climaxes of howling guitars and thundering percussion which dissolve into an impasto drone. The closer ‘Lullaby’ also contains some of Soused’s finest moments. At first sparse and foreboding, it peaks with shrieking guitars, tense roiling drone and theatrical keys. The effect is deeply haunting, an appropriate closer to an album that for all its high drama and huge sonic and dynamic range, seldom deviates in tone from that state of grim ominousness.

Although it might seem like nitpicking to point out the lack of variety in the album’s mood, both Walker and Sunn O))) have repeatedly proved themselves more than capable of navigating a huge range of emotions across their full-lengths. By comparison, Soused feels slightly wanting. That minor quibble notwithstanding, there isn’t a moment of filler across its five tracks, with each one of its 50 minutes exploited to full dramatic potential. Soused may not be the best record either Sunn O))) or Walker have released in the last few years – those accolades go to Monoliths & Dimensions and The Drift, respectively – but it’s still an endlessly compelling work, the match between singular solo artist and the pivotal group every bit as thrilling as you’d expect.