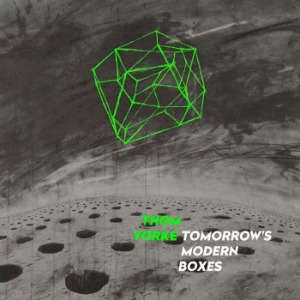 Thom Yorke described the distribution of Tomorrow’s Modern Boxes via a paid-for BitTorrent as an experiment to bypass the “self-elected gatekeepers” of the music industry, but coming hot on the heels of U2’s insidious release stunt – creeping into your bedroom and sliding their latest self-important rock opus into your iPhone while you slept – it sat slightly uncomfortably. Yorke’s long-standing beef with the music business is well documented (see Radiohead’s endearingly awkward 1998 documentary Meeting People Is Easy) but is this a much cleaner approach? Aligning one’s self with the machinery of the pirates, rather than with the labels and the record stores, might be more of a moral grey area than, say, U2’s tax affairs, but it leaves an odd taste regardless; the impression that Radiohead made it to the top, then yanked up the ladder.

But let’s not linger too long on delivery. If a solo album can be seen to be the purest example of a musician’s internal world, away from the push and pull of collaboration, Yorke’s second is telling. Frequent visitors to Radiohead’s blog Dead Air Space will be familiar with Yorke’s penchant for posting playlists, which largely focus on his love for solo electronic dudes such as Untold, Caribou, Nathan Fake and Machinedrum. Were it not for the camaraderie of Radiohead – a friendship group and support network that stretches back to an Oxford common room – you suspect that Yorke would have long since packed in rock music for good to focus on this sort of blurry and genreless vocal electronica, writ both low- and minor-key.

Tomorrow’s Modern Boxes sounds small, muted, hemmed in. ‘A Brain In A Bottle’ and ‘Guess Again!’ set out the album’s relatively limited instrumental palette: digitally processed piano, wiggly basslines, biscuit-tin beats and (it would seem) no guitars. Granted, this hardly sounds earth-shattering as a prospect, but Yorke – here aided by long-time producer and ally Nigel Godrich – appears entraced by the possibilities of such intimate scaling, and finds ways to make it work. I’m of the opinion – apparently rare amongst music writers, possibly not so rare with listeners at large – that Radiohead actually got better after OK Computer, with In Rainbows being their best album: the moment Yorke stopped trying to be a rock singer, and started trying to be a soul singer. Whether he succeeds totally on that score is questionable, but in the process his voice has become a unique thing: expressive but slightly alien, with a weird curl that makes each word sound slightly suspicious of itself as it drops out his mouth.

Sparing itself the necessity of going big, Tomorrow’s Modern Boxes is free to build some captivating little niches. The sparse, beatless ‘Interference’ is a muted but beautiful elegy that foregrounds Yorke’s bereft vocal, dwelling on drifting friendships and a sense of cosmic powerlessness (“The ground may open up and swallow us/In an instant”). ‘Nose Grows Some’ appears to be a private sort of love song, conducted in an intimate, shared language. “Two birds on a wall/Your nose just grows”, sings Yorke over vaporous synths and dotty drums. ‘Guess Again!’ takes up a ‘Pyramid Song’-style piano line and lets it unfurl over a clacking beat and murmurs of sub bass, with lyrics that might be self-reflexively poking fun at Yorke’s own worrywart tendencies: him and his kids hiding indoors with the curtains shut, fearful of the wild dogs and other terrible beats that roam out in the garden.

Towards the album’s centre sit a couple of tracks that consciously gesture in the direction of the dancefloor. ‘The Mother Lode’ is likable enough, a UK garage skitter topped by whirling piano samples and Yorke’s layered vocal – in places, corporeal and upfront, elsewhere rendered as ethereal echoes. Less appealing is ‘There Is No Ice (For My Drink)’. Going on the title, I think it’s attempting to say something profound about global warming and modern entitlement, but swapping out the lead vocal for a mangled vocal loop proves that this material can sound a little ordinary when shorn of Yorke’s presence.

In places, Tomorrow’s Modern Boxes can feel disengaged, opiated – a bit complacent, even. Whereas Yorke’s first solo album The Eraser seemed willing to get its hands dirty – dealing with climate change, and, on the remarkable ‘Harrowdown Hill’, the mysterious death of weapons inspector David Kelly – here we find Yorke distant and enigmatic. Of course, this isn’t a new thing: his lyrics have long been preoccupied with notions of erasure, dislocation, of how to disappear completely. Bono still reckons he can change the world; on Tomorrow’s Modern Boxes, Thom Yorke sounds like he can barely change the bedsheets. The result is a curious mix: a subtle and often beautiful record about not very much at all.