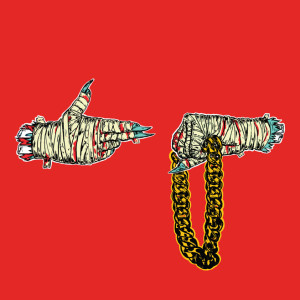 Is there anyone on earth right now who sounds like they’re having a better time than El-P and Killer Mike? And if so, how about that for a turnaround? As a younger man, El-P crafted oblique, avant-garde hip-hop dystopias like 2002’s Fantastic Damage that gripped onto the underside of the industry as if by its fingertips. Killer Mike took the more overground route, signing to Outkast’s Aquemini imprint and rhyming on Speakerboxx/The Love Below – but his intense, politicised raps didn’t convert into sales figures, and shit soon got dark. It’s not a recipe for a party, exactly. But just like its predecessor, Run The Jewels 2 is the sound of two 39-year-old men having the best mid-life crisis ever, making near-the-knuckle rap bangers right on the boundary line between the underground and the mainstream.

Run The Jewels is El-P and Killer Mike’s very own Watch The Throne, working to the maxim that two talents joined in friendly one-upmanship can push each other to new heights. The chemistry is unmistakable on an outing that in places you receive more like a stand-up comedy skit than an album. Early on, especially, the shared giddy joy leads to moments of boyish – although you might say boorish – juvenilia. “You can all run backwards through a field of dicks,” raps El-P on ‘Oh My Darling Don’t Cry’, a song which also features lyrics about blowjobs and an appearance by Michael Winslow, best known for doing those robot voices on Police Academy. ‘Blockbuster Night Part 1’ finds Killer Mike dismissing his critics as “pussy, proverbial pansy panty-holders”, while ‘Close Your Eyes (And Count To Fuck)’ is a breathless, pneumatic track splattered with crunchy guitar that lines up ski masks, waterboarding and a cameo from Rage Against The Machine’s Zach De La Rocha. The testosterone is strong in this one.

Yet for all this, Run The Jewels 2 never feels as brutishly macho as, say, Death Grips. Yes, the title of ‘Love Again (Akinyele Back)’ makes reference to the XXX-rated Queens MC behind the ‘90s oral sex hit ‘Put It In Your Mouth’ – but Gangsta Boo gets a chance to one-up the boys, swapping out the dick chants with something more clit-centric. The album’s moments of darkness, meanwhile, come with honest citations. Hard-times anthem ‘Lie Cheat Steal’ finds the pair dwelling on their tough pasts – El-P, “born in a Little Shop Of Horrors I can’t afford to rent in”, Mike longing for peace but sanguine about the possibility of violence: “And I love Dr King but violence might be necessary/Cause when you live on MLK and it gets very scary/You might have to pull your AK, send one to the cemetery”. But the album’s real sock to the gut comes on true-life crime fable ‘Crown’, on which Killer Mike recounts dealing coke to a pregnant woman. “Shame!” chants a disembodied chorus, but the guilt that he feels is a motivating force that pushes him along the road to redemption.

Elsewhere, it’s the sheer energy on display that pushes Run The Jewels 2 through. The production is popping throughout, funky as hell, and often dotted with unexpected twists and turns: the flatulent brass that pipes up in ‘Jeopardy’, or the spasmodic drumming that clatters through ‘All Due Respect’, courtesy of Blink 182’s Travis Barker. And the two continually raise their game to meet it, pushing one another to new heights of creative boastfulness and mad invention. Mike compares himself to brutal Zulu ruler Shaka Zulu, shouts out Philip Seymour Hoffman and warns Satan he’ll be late to the gates of hell. El-P boasts “I don’t flirt with greatness I wifed it in Vegas”. Mike wakes up in Africa with a case of malaria and a Pitbull terrier. El-P threatens to teabag a piranha tank. It’s not all about punchlines, but when they come this quick and fast it makes sense just to lie down and accept your place on the canvas.