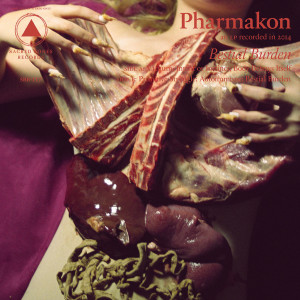 It’s easy to imagine a Pharmakon record not living up to the raw, deeply physical experience of her live performances. When I saw her last month at Unsound Festival in Krakow, in the huge industrial space of Teatr Łaźnia Nowa ahead of a Swans show, the sheer massiveness of her performance belied the small figure she cut on stage. Even though the stage was set up for a much longer, louder show to be performed by a group of five, Margaret Chardiet took complete possession of the space as she stomped around, not so much screaming as hurling cries from somewhere deep inside, and thumping metal with abandon. The force and volume she wielded with her body was a match for the backdrop of power electronics that filled the space, and though from my vantage point she appeared to be little more than a black-clad speck, her control and ownership of the vast room was impressive.

Descriptors such as “primal” and “visceral” are often thrown about in the discourse surrounding noise music, perhaps because of the directness of the relationship between the body and sound. Noise is apt to fill you up and make you feel as if you’ve been turned inside out; high frequencies feel as though they might fry synapses and make your hair stand on end, and low ones shudder you, delivered to your chest with the force of a stomping jackboot. You become increasingly aware that your body is little more than a mass of meat, water and skin, and when you look around at the crowd, it’s little more than a gathering of meat-vessels, standing up but otherwise being completely subsumed.

To translate the physicality of that experience into an album, a digital and physical artefact that can be turned off and on again at whim, quite at odds with the control the audience surrenders during the live performance, is a formidable task, and not one Margaret Chardiet takes lightly. For her second LP on Sacred Bones, she weaves the physicality of the music and her concept of the body as a vessel into her overarching theme. Its title, Bestial Burden, gives some clue as to the ideas she addresses: the notion of the body as a volatile, corrupted, often disgusting object prone to failure that, unfortunately, is also the only thing keeping you alive. And if “visceral” is too often banded about in discussions of noise, then here Pharmakon makes it literal, photographed with actual (non-human) organs laid out on her body for the LP cover.

There was a real-life precedent for Bestial Burden’s conceit. Ahead of a European tour, Chardiet was hospitalised with an unexplained pain that turned out to be a large (but fortunately benign) cyst requiring emergency surgery, an extended bedridden stay in hospital, and the cancellation of the tour. By and large, the bodies of healthy people in their mid-twenties do not fail, and yet Chardiet’s body turned on itself, and on her, without warning. Her description of the experience is harrowing: “It was as though my body had betrayed me, acting as a separate entity from my consciousness. I thought of my corporeal body anthropomorphically, with a will or intent of its own, outside of my will’s control, and seeking to sabotage.”

The outcome of that experience was Bestial Burden, which opens with the sound of Chardiet’s breathing on ‘Vacuum’; loud, shallow gasps seemingly forced from the back of her throat, layered with increasing intensity and urgency. This extra-musical sound of her physical self sets the tone for the remainder of Bestial Burden, an album that deliberately blurs the lines between the self that is made up of organs and flesh and apparatus designed to keep you alive, and noise and power electronics – sonic realisations of the thousands of little cacophonies the body effects every day. Later, on ‘Primitive Struggle’, that breathing becomes choking and coughing. The effect is literally repulsive, which is presumably the point: if, as the truism goes, the body healthy is the body beautiful, then the diseased body, with all its weaknesses and sputterings and mucosa and failing organs laid bare, is hideous.

It’s distressing stuff, but flawed, too: Bestial Burden’s weakness is its failure to integrate ‘Vacuum’ and ‘Primitive Struggle’ more fully into the record as a whole. Although they do incorporate some of the thundering percussion and screeching timbres so abundant in the other tracks, their relative isolation makes them feel more like introduction and interlude – or subcutaneous tissue padding the meat of the album proper. This is a pity, as the remaining tracks – only four in total, ranging from just under five to eight and a half minutes long – are mostly excellent. ‘Body Betrays Itself’ opens with industrial percussion and low, ominous tones before Chardiet’s guttural screams and raw-throated singing rip through the track’s sparse architecture. It’s similar to the scream that opens Pharmakon’s Sacred Bones debut, Abandon, but surrounded by this space, it feels even more immediate. It dissolves into a discordant squall that swells and recedes, and the silence it leaves in its wake haunts long after the last scrape peters out and the fractured gasps of ‘Primitive Struggle’ come in.

Pharmakon has spoken about her lack of musical training in interviews, and by and large her instinctual approach works, with raw-edged timbres, meaty percussion and full-blooded screams that are immediate and potent. On the other hand, ‘Intent or Instinct’ suffers from an unimaginative structure, with industrial percussion that slices through maudlin bass, the rhythms spare but violent against a teeming backdrop of gradually thickening noise. ‘Autoimmune’ is more fully realised. Tapping into industrial and post-punk as well as noise and power electronics, it’s the hardest hitting of Bestial Burden’s tracks, its mangled percussion, rough-hewn slabs of noise and screams that descend into tortured howls all propelled forward by a punishing rhythm.

At only about half an hour, the Pharmakon live show may be short, but if anything that brevity sharpens rather than diminishes its physical impact. Bestial Burden aims for the same effect, but on record Chardiet’s tight editing can work against her, and although this LP is more fully realised than Abandon, it could be fleshed out still further without losing any of its power. That niggling sense of incompleteness notwithstanding, Bestial Burden, remarkably, achieves exactly what it sets out to do: to turn the gory inner mechanics of the body outward, and lay bare its unpredictable capacity for self-destruction.