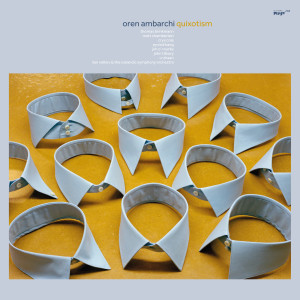 Does Oren Ambarchi ever sleep? Looking at his output over the last few years, it’s hard to imagine that he manages more than a few minutes of shut-eye each night. Most of his records since 2012’s Audience of One for Touch have been collaborations: Connected, with Robin Fox, pieces for dance that made for an exquisite standalone album; Shade Themes From Kairos, with Stephen O’Malley and Randall Dunn, which fleshed out the soundtrack from the short film Kairos, and a recent full-length, Alps, that struck an unexpectedly fine balance between Ambarchi’s dense instrumentation and Eli Keszler’s meticulous percussion.

Consider all this in addition to ongoing collaborations with Keiji Haino and Jim O’Rourke, work with improv pianist John Tilbury, a forthcoming album with Haino and O’Malley as Nazoranai, and one of his finest 12-inches to date – Stacte Karaoke, which may feature the most perverse take on a ZZ Top riff ever committed to wax – and it’s a wonder Ambarchi finds the time to tour, let alone sleep.

His touring schedule is busy, too. When I saw him live in 2013, he performed ‘Knots’, the lengthy centrepiece from Audience of One, with Eyvind Kang, the Sinfonietta Krakowia and regular collaborator Joe Talia. (Happily, a recording of the performance is due for release on PAN.) Talia’s drumming in particular left an indelible impression: a thick lattice of cymbal and brushed rhythms that coalesced and seemed almost to crush one another before clearing a space for strings, and then reasserted themselves as the ever-shifting backbone of the piece.

Given Ambarchi is as well known for being an accomplished drummer as a multi-instrumentalist, it’s unsurprising that on Quixotism rhythm takes centre stage, Ambarchi using the electronic percussion of Thomas Brinkmann, who features on its five “parts” (cryptically titled ‘Quixotism Part 1’, ‘Quixotism Part 2’, and so on), as a starting point for his compositions. The quickened pulse that courses through Quixotism has a unifying effect, important for an album recorded with a number of collaborators over a couple of years and in three continents. But more than just acting as a marker of continuity, the percussion lends each piece a distinct energy and tone, while also delineating the album’s overall arc. On ‘Quixotism Part 1’, it’s barely detectable to begin with, little more than a faint throb that builds almost imperceptibly alongside the spare, otherworldly tones of John Tilbury’s piano and the Icelandic Symphony Orchestra. Only about two thirds of the way through does the percussion take on a smacked leather quality, its movement no longer an anchoring pulse but a meaty polyrhythm, any indistinct blurriness unexpectedly solidifying into a transient core.

Repeated listening makes sense of Ambarchi’s choice of title and his reluctance to pin any other lexical referents to this album beyond that word. Quixotism is a state of romantic dreaminess or fixation on the otherworldly or unattainable, the word derived from the titular character in Miguel de Cervantes’ novel Don Quixote. Fittingly, Quixotism is entirely at odds with the conventions of album structure: while in the scheme of the whole album the first part acts as an introduction of sorts, in reality ‘Quixotism Part 1’ is neither a lengthy introduction nor a defining centrepiece in the vein of ‘Knots’. Rather, it’s an extended illustration of the oxymoron at the heart of Quixotism, that of focused sprawl. Of course, that dream architecture, where expected linear trajectories or build-sustain-release structures are rejected in favour of something altogether more amorphous and unpredictable, is hardly new to Ambarchi’s work. In that sense, the 2012 album Sagittarian Domain is an appropriate companion to Quixotism, as it too foregrounds rhythm and groove as a centre from which the compositions can shoot in any direction, but the latter LP is both more catholic and more compelling.

The quiet dynamics of ‘Quixotism Part 1’ give way to the much shorter second part. Here, Tilbury’s piano lightens the density of the distinctly more technoid percussion and the claustrophobic murkiness of Ambarchi’s guitar. ‘Quixotism Part 3’ draws even more heavily on the watery textures and propulsive rhythms of dub techno, but its warped shuffle is disorienting, again seeming to follow its own curious internal route rather than techno’s typical build and breakdown. In contrast to the first part, here the guitar and the orchestral tones have a curiously stifling effect, as if they occupy all the space created by the rhythmic framework. A sputter of clipped percussion towards this part’s close serves to open the following one, and while this thread tying together parts three and four is clear, their respective atmospheres could hardly be more different. For the fourth, and shortest, part of the album, Ambarchi and collaborator Matt Chamberlain ratchet up the intensity with almost violent percussion, and the orchestra’s music, recorded here via contact mics, is rendered as a swarm of shimmering tones.

As its title suggests, Quixotism’s narrative arc is obscure, and as such the album contains no real highlights or low points; instead, each part maintains a discrete identity of its own, serving both as groundwork for each subsequent part and the basis for its counterpoint. Like so many of Ambarchi’s recent works, Quixotism hinges on the tension between continuity and contradiction, perhaps more so than ever. The final part is a case in point: even though it’s far from the album’s most forceful moment, it’s nevertheless a dramatic climax. A restrained, seething clamour with tabla, synths and strings, it culminates in a moment of rare melodic beauty, and then vanishes in a puff of dream logic.