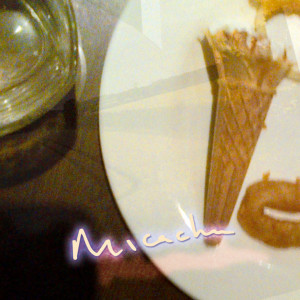 It’s safe to say that most indie band singers don’t go on to carve out a singular space in avant-garde composition, yet Mica Levi has done just that. Until recently, Levi seemed to straddle both sides of the experimental/pop divide, producing several mixtapes and an EP on Greco-Roman for the pop musician Tirzah, and as founding member of Micachu and the Shapes, folding experimental techniques and homemade instrumentation into a pop blueprint. But if earlier releases on the likes of Greco-Roman and Rough Trade bore hallmarks of both the pop and the avant-garde, Levi’s original score for Jonathan Glazer’s 2014 film Under The Skin positioned her firmly on the experimental side of that divide. That her latest release is an hour-long cassette on Demdike Stare’s DDS label gives a strong indication as to where her focus currently lies.

As such, it’s worth considering the Under the Skin soundtrack as a springboard for the ideas Micachu explores on Feeling Romantic Feeling Tropical Feeling Ill. Unusually, the score is often used in place of dialogue or other exposition to give form to the thoughts and feelings of the film’s sole central character, an alien disguised as a woman whom handheld cameras follow in real time as she drives around Glasgow seducing – and later consuming – men. Blurring the division between live instrumentation and digital processing, and heavily influenced by the likes of Xenakis, it also mirrors beautifully the film’s muddling of dead-eyed predation and emotions such as empathy and love. Unspoken fear and tension, rather than any readily identifiable mood, form the emotional core of both soundtrack and film, and as such a new instrumental Micachu release that explicitly lays out a trio of ‘feelings’ is interesting on the strength of that contrast alone.

Feeling Romantic Feeling Tropical Feeling Ill may be split into three ‘chapters’ that function more like themes from a suite than tracks proper, and is beholden to no subject matter other than the three moods named in Micachu’s title, but those themes are deliberately slippery, and plenty interchangeable. Stylistically, it’s all over the place, folding and warping pop, dance, instrumental hip-hop, contemporary composition, soft rock and more into its sprawling structures, with the chapters’ names tellingly pointing to nebulous moods rather than events or tangible referents. For that very reason, it’s better absorbed as a jarring series of vignettes than as a linear or narrative progression. Yet it’s never aimless: untethered from the conventional track-by-track structure of an album, each idea Levi hits upon is given the space it needs to unfurl.

What exactly this entails varies hugely, giving rise to an unpredictable, often bewildering trip. Micachu might establish an element – a syncopated rhythm, or a nervy string figure – through repetition before subjecting it to a kind of chewing-up. Take the warbling melody in the central ‘tropical’ portion. It repeats almost literally ad nauseam, Micachu stacking up counterpoints and conflicting textures (from somewhere in the murk, a bird’s whistle emerges) before resolving, or dissolving, the theme into a scratchy, distorted thicket of sound and letting it fall away entirely. Sometimes, counterintuitively, giving a figure or idea space means cutting it off rather than fleshing it out beyond its natural lifespan to meet the requirements of typical track length, so miniature structures within the main themes are abruptly truncated before they have time to outstay their welcome.

From the mosquito-like squeal that begins the cassette to its underlying current of menacing strings, everything on Feeling Romantic Feeling Tropical Feeling Ill feels slightly out of joint. This opening gambit is the closest Micachu comes here to the atmosphere of the Under The Skin soundtrack, with tense, paranoid drama ratcheted up to maximum levels. But where the score is comparatively consistent in mood and palette throughout, here Micachu unsurprisingly touches on a far broader range. Given that huge range, any reference points that apply to the whole tape are more relevant to mood than technique. Still, the Xenakis influence is strong, there’s a hint of Arthur Russell in Micachu’s use of space and echo to import affecting, alienating solitude, and chugging rhythms and plangent reverb bring to mind the poignant desolation of Burial. More broadly, Micachu’s tendency to swamp tropes drawn from pop, New Age and exotica in prickly layers that place them at far from any original context recalls the wilful iconoclasm of Dean Blunt and Hype Williams.

More than the other two feelings named in the title, illness seems to be the tape’s prevailing theme. On both ‘Tropical’ and ‘Romantic’, queasiness counters the kitsch, and digital grit underpins any sentimental passages, so the effect is that of an outsider looking in to warm, familiar scenes. Any tropicalia is far from the gaudiness and exoticism associated with the word, as if Micachu has plucked inchoate notions of the tropical from the furthest reaches of her mind and jumbled them together into a semi-coherent sequence, while a romanticism that involves nervous string shrieks jammed against a foreboding pulse implies the drama of capital-R Romanticism rather than slushy romance. But there are moments of tenderness too, in the string motifs, murky hooks and fogged beats, that quickly dispel any idea that this is a dry exercise collage in collage or pastiche. The overriding effect is similar to a fever dream, with images slipping in and out of focus and combining to form a fractured, disorienting whole.