This summer secretsundaze celebrates 10 years of partying in sunny Barcelona with one of its biggest line-ups to date in the Catalan capital.

Bringing together a cluster of international stars plus a handful of acts from their own TSA Artists roster, the party on June 21 kicks off in the afternoon at the tree-lined Poble Espanyol Pic-Nic Area. Techno originator Derrick May and Panorama Bar’s Ryan Elliott lead the charge, with Nick Höppner, Funkineven, Hunee B2B Antal and secretsundaze resident James Priestley along for the ride too.

At midnight the party moves to La Terrazza, the iconic open-air club a minute’s walk away, where Detroit original Delano Smith will be joined by Jeremy Underground, Amir Alexander and Giles Smith. Early bird tickets are now sold out but advance tickets can be still be snapped up from Resident Advisor.

Meanwhile, there are only two weeks to go until secretsundaze’s Easter Thursday party at Hackney venue The Laundry on April 2 with New Jersey’s DJ Qu, the eclectic mind of NTS Radio regular Mosca and Panorama Bar resident Virginia. Grab tickets from RA.

Find out about the rest of secretsundaze’s international plans for 2015, including the annual Easter Sunday all-dayer at Frankfurt’s Robert Johnson and a jaunt to Japan and Australia. 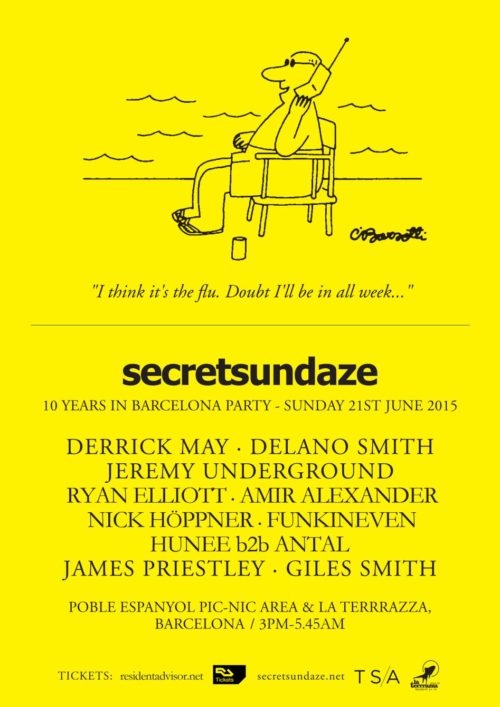