Tiga heads up the next three-month residency at London’s XOYO, where he will be joined by a host of big name guests across three months of shows, starting on April 9.

As well as acts with a longstanding association with Tiga including 2ManyDJs, Erol Alkan and DJ Hell, the Canadian DJ and producer will be joined by recent collaborator Hudson Mohawke, Laurent Garnier, Jackmaster, Tessela, Cajmere, Octave One and The Martinez Brothers.

Tiga will appear at each of the weekly shows at the Shoreditch club, except May 21 when Matias Aguayo and Rebolledo take over. The closing party on June 25 will see Tiga play all night.

Tiga’s XOYO residency follows the release of his first album in seven years, No Fantasy Required. He joins Scuba, Benji B and Skream on the list of DJs to have hosted three-month stints at the Shoreditch club.

You can check the full line-up below, and buy tickets via the XOYO website. 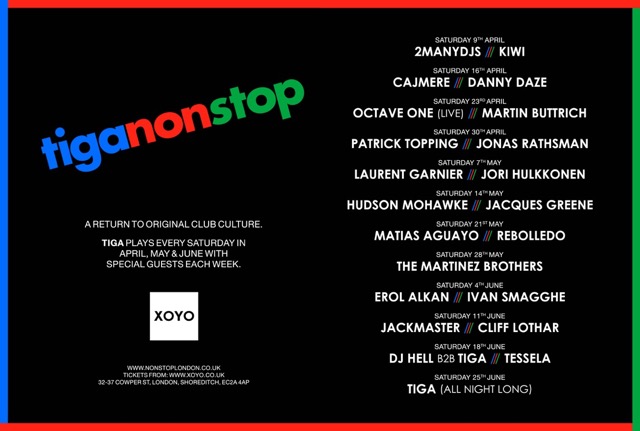