Why is this website mixing ambient music with police scanner audio so intensely gripping?

Youarelistening.to is a site that generates strange, endless sound collages by loading ambient tracks from SoundCloud and blending them with police radio chatter from locations across the world. Created in 2010, its novelty might have been expected to wear off by now. Instead, Will Pritchard discovers, its eerie, relaxing experience continues to amass new fans and new meanings in the hyperconnected age of Donald Trump.

It was 2010, and the San Francisco Giants had just won the World Series. Eric Eberhardt was sitting at home, scrolling through Twitter and following links to Soma FM, a San Francisco-based group of online radio channels. What he was hearing broadcast that night was a stream of the local San Francisco police radio. Given the manner in which the city’s celebrations quickly descended into bin-burning pseudo-riots, it made for some pretty interesting listening. But, after around five to 10 minutes of listening to the situation unfold, Eberhardt says his attention began to wane and he decided to put some music on.

“I started playing some electronic music from my iTunes, and that combination of the police scanner audio and the ambient electronic music that I was playing worked really, really well together,” he says. “It sounded like the soundtrack to a film or something.”

As far as epiphanic moments go, this wasn’t going to be the easiest one to translate to others – which was a point, Eberhardt notes, of great frustration. “I wanted to be able to share that experience with people,” he says. “But it was really complicated because I’d have to say ‘okay, go to this one web radio station, and also listen to some other music on iTunes, and here’s the music you should listen to…’”

After mulling it over for a while, Eberhardt came across “a bunch of really amazing ambient music” on SoundCloud – a site which had just that year picked up its millionth user, and was quickly establishing itself as a major platform for musicians. He realised he could take the SoundCloud player and embed it on a webpage alongside a separate player for the police scanner and make “a one-stop shop for people to tune in to this sort of thing”.

Inoffensive, untroubling sensory experiences can bring a bit of calm to an otherwise frantic existence

Today, that one-stop shop is Youarelistening.to, and it now includes streams for multiple cities across the US. There’s also the option for users to create their own experiences by pulling in different streams from across the web, and Eberhardt has built in a visual aspect too, making use of the vast array of user-generated content available across sites like Flickr and YouTube.

There’s always been an enduring appeal to sites like Rainy Mood (which plays a looped recording of rainfall and is incredibly satisfying to listen to), and today it’s possible to find playlists on Spotify of all sorts of field recordings – like this one, which is just the sound of a log fire crackling away in the corner. In the same vein, there’s the Norwegian phenomenon of Sakte-TV or ‘slow TV’ – broadcasts on which have included a seven-hour driver’s-eye view of a train journey and a twelve-hour knitting marathon.

The popularity of these, one might presume, is the way that these simple, inoffensive and untroubling sensory experiences can bring a bit of calm to an otherwise frantic existence.

In contrast, Youarelistening.to offers an experience that is more strangely captivating. In an increasingly connected world, it’s particularly intriguing to see and hear the tussle between local and global played out in real time. Where Rainy Mood or the Sakte-TV broadcasts are disconnected from the here and now and allow for a sense of drifting off into yourself, Eberhardt’s creation puts you, the listening observer, at the very centre of things.

The tussle between global and local is perhaps now more inherently political than ever. The political upheavals of the past few years have shone a spotlight on populations grappling with the effects of globalisation. Across Europe, nationalism dominates far-right (and often not so far-right) rhetoric. In the US, isolationism was the calling card of Donald Trump’s successful presidential bid.

In an increasingly connected world, it’s particularly intriguing to see and hear the tussle between local and global played out in real time

John Harris has argued that the rise of self-interested political populism is itself a response to the hypercomplexity of our daily lives, and Adam Curtis has presented his own detached argument for how we’ve arrived at a world that values the self-serving dot-connection of conspiracy theory over hard fact. (That the latter employs a soundtrack of Burial and Nine Inch Nails that would fit nicely on Eberhardt’s site is perhaps no coincidence.)

Youarelistening.to is unique in a sense of being able to simultaneously represent the global and local. It’s local in that it focuses not only on single cities, but on individual people within them (ie, the police and those they’re responding to). And, of course, it’s global as it projects these experiences worldwide via the internet, as well drawing on collaborators (particularly musicians) from all over the world to help shape those experiences.

Writing in the book that accompanied his 1996 Ocean Of Sound compilation – a collection that aimed to serve as a historical survey of ambient music – David Toop outlined the ways in which “music has reflected the world back to itself and its listeners.” 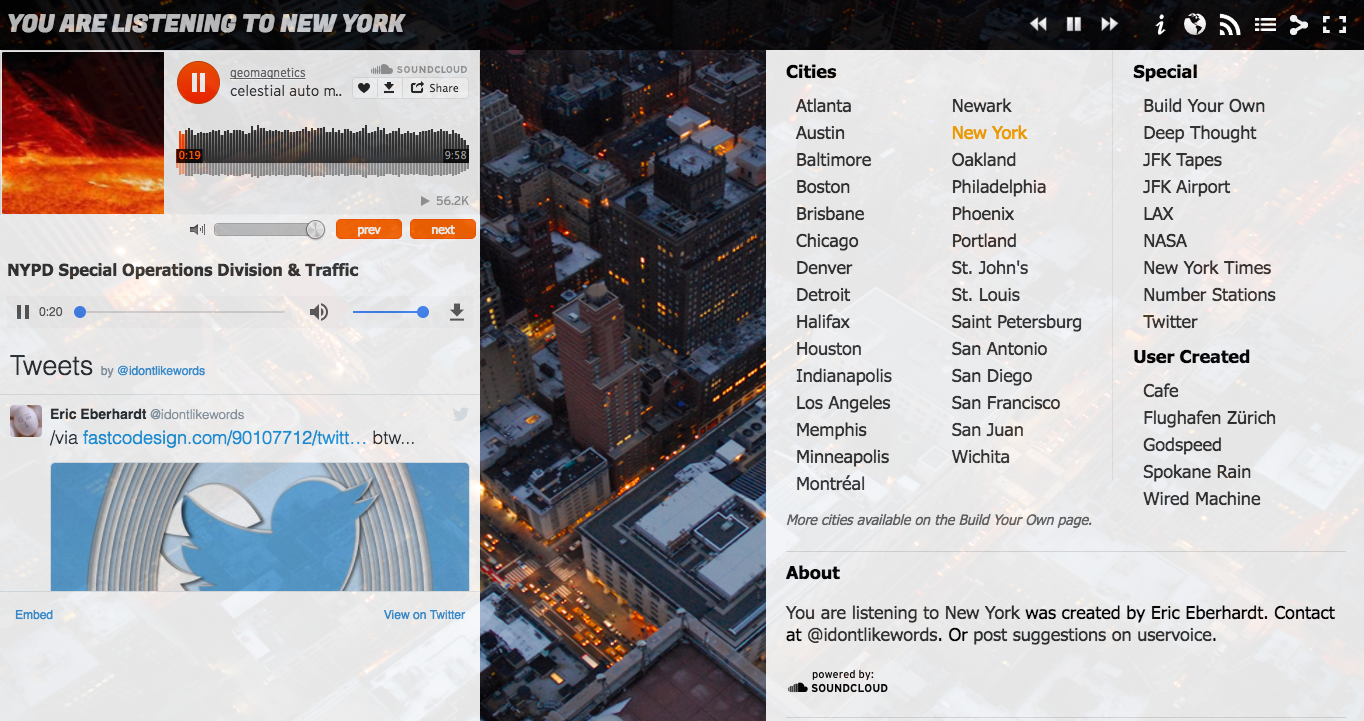 Its popularity is definitely a reaction to the hyperconnected, urban lives that we’re living now

Youarelistening.to certainly functions as an extension of Toop’s argument. Toop writes about music from the 20th century (and beyond) as responding to “accelerating communications and cultural confrontations.” Eberhardt cites his own love of bootlegs, mash-ups and bringing together different sounds as part of what drove him to create the site, which he refers to as an ongoing experiment.

However, Toop’s historical writing would also indicate that Youarelistening.to is not unique in its reflective, responsive function. So how has it managed to maintain its dedicated listener base?

Eberhardt admits that, after the initial buzz that followed the site’s founding, his expectation that people would “move on and find the next cool, new or exciting thing on the internet” did come to be. However, he says, there remained a number of people interacting with the site who “never really went away.”

“Why is the site so compelling?” he asks, as though he’s turned the question over to no avail in his mind plenty of times previously. “One thing I’ve found from many listeners is that they really weren’t necessarily aware of this type of music,” he offers.

As a music discovery platform, the site benefits hugely from the rude health and concurrent popularity that the ambient music scene currently finds itself enjoying. “I think a lot of that is definitely a reaction to the hyperconnected, increasingly urban lives that we’re living now,” says Eberhardt. “I think this is also reflected in how many mindfulness or meditation-type apps you see, or websites out there for people who want to find a sense of calm or peace.”

Eberhardt says that his ambition for the project is to carry on experimenting with different combinations: having live recordings of people reading news headlines or Twitter feeds over the music, for instance – embodying Toop’s idea of reflection in an even more direct way. He’s also taking on listener feedback to develop a more mobile-friendly version of the site, which he hopes to have online this year. Further down the line, he says he’d like to make the political aspect of the site more explicit – and to encourage people to really engage with what they’re experiencing – but this, inevitably, will be a change that must be welcomed by his audience if it’s to occur.

As technology has made the world a smaller place, it’s made it more contested too.

It’s perhaps a little ironic that people are turning to their devices to escape the mêlée that constant connectivity has caused, but it seems to be working. It can certainly feel overwhelming to have (just about) all the music in the world available at your fingertips, so being able to curate and present it in new, innovative ways is important. As a result, what has built up around Youarelistening.to is a global community of both active and passive participants in a unique, and uniquely timely, curatorial effort.

“One of the most rewarding things about the site is when someone says, ‘Wow, this music is really helping me to reduce my anxiety or feel more centred,’ or something like that,” says Eberhardt. Such a feeling can be a welcome antidote in 2017.