In the depths of a disused power station in the former East Berlin, British experimental duo Emptyset bombard their audience with waves of rib-shaking bass and pummelling beats. A lone spotlight shines from above, tracing patterns on a transparent screen; it looks like a self-aware retinal scanner from a sci-fi movie suspiciously probing its human prey. On the ground floor below, visible through a vast hole in the first floor of what used to be a turbine hall, concrete pillars are illuminated, pulsing in time with the music’s resonant throb. As the music fills every nook of this multi-storey concrete space, the building feels like it’s taken on a life of its own.

Thrilling, visceral experiences like this are plentiful at Berlin Atonal, a five-day celebration of techno, ambient and experimental music in the German capital. Now in its fifth consecutive year as a modern festival, the event was originally founded in 1982 by Dimitri Hegemann, an important figure in the foundation of Berlin’s techno scene. For the next eight years, Hegemann invited acts like Psychic TV, Einstürzende Neubauten, Test Dept, Jeff Mills and 808 State to perform, tracing a line between the nascent techno genre and industrial music long before black outfits and dark rooms became part of the city’s cultural fabric.

The revived Atonal isn’t run by Hegemann, but three younger curators: Laurens von Oswald, Harry Glass and Paulo Reachi. It’s located in Kraftwerk, a building that also houses techno clubs Tresor and OHM, with another club, Globus, adjoining. Much of the lineup at this year’s event, which took place last weekend, was in keeping with the events of the ‘80s: dark, rhythmic sounds with an apocalyptic streak that lend themselves to being played in Kraftwerk’s colossal hall through an exceptional sound system. Some, like Demdike Stare and Roll The Dice thrived in this setting, their gritty jungle and blackened synth sounds creating an invigorating sonic blast. Others, like Belief Defect (whose music is literally a “soundtrack for this apocalyptic time”) struggled to connect on a level beyond simple shock and awe.

With the threat of a literal apocalypse closer than ever, much of the main stage’s best acts this year are those that offer an escape from the increasing bleakness of the 24-hour news cycle rather than a soundtrack for an imagined armageddon. One memorable collaboration saw Fis team up with live coder Renick Bell, bespoke algorithms splicing Fis’s wheezing sonics into an unpredictable battery of rhythm and texture with Bell’s code projected around them. Exposing Bell’s workings for all to see didn’t make the process any less mystifying, but it was refreshing to see technology’s artistic potential in action rather than as a tool for data collection. On the final night, Belong’s processed guitar sounds offered another highlight, providing ambient catharsis for both tired minds and weary bodies, many of whom laid on the floor.

Another thrilling collaboration was Powell’s team-up with Turner Prize winner Wolfgang Tillmans. Coming across like a modern, stream-of-consciousness Front 242, the duo’s ramshackle collision of fizzy synth blasts, clattering drums and spoken word vocals went from the nonsensical to the political; occasional images of dogs projected behind the duo gave everything a surreal, playful edge. Their set lacked the polish of many of the main stage acts, but more than made up for it in the sense of fun they injected into the gloomy space. The BBC Radiophonic Workshop’s performance of Delia Derbyshire’s psych-pop song ‘Ziwzih Ziwzih OO-OO-OO’ a few nights before was a similarly joyful moment.

When the music ended on the main stage each night (usually around 1am), the party continued down below, on Stage Null (a smaller version of the main stage on the ground floor) the brightly-lit Globus venue and Tresor, the basement techno club that should be on everybody’s bucket list. Walking down the long, bright corridor to Tresor feels like being in the line for an industrial theme park attraction. Flashing lights guide you to your destination, a dark, damp, foreboding space flanked by steel bars where you can feel the air being pushed outwards by every kick drum. Entering Tresor is like diving underwater; there’s a period of acclimatisation your body needs to go through to adjust to how unbelievably loud and dark it is.

Techno is the only thing on the menu at Tresor, but that doesn’t mean that many of the artists playing there didn’t have their own perspectives to offer. Anastasia Kristensen, a Copenhagen DJ whose profile has been steadily rising over the past 12 months, kicked off Friday’s program at midnight with a blistering set that sprinkled a jungle and hardcore flavour into to mix (I even heard a vocal sample from Guns N Roses’ ‘Welcome To The Jungle’). On the following night, Japanese selector DJ Yazi delivered an equally powerful set that played with techno’s hypnotic side, at one point playing a track that sounded like marbles were rolling gently around the room.

In my own experience, and that of other previous attendees I’ve spoken to, Atonal’s single-minded approach to curating techno and experimental music that shares a common DNA has, in the past, been a doubled-edged sword. It’s the best festival in the world for this kind of dark, introspective music, but it’s easy to get overloaded with it, especially if you crave the variety of genre that a festival like Krakow’s Unsound offers. This year though, there was far more variety. Deep house legend Pépé Bradock, dancehall unit Equiknoxx and Glasgow’s Optimo were just a few of the festival’s unlikely acts, the latter being handed a note by one techno purist that read “fuck house”.

If you wanted to get away from techno, OHM, a tiny club in the power station’s former battery room, was the best place to see more weird, wonderful and above all fun music from across the world. It was here that modular synthesist Robert Aiki Aubrey Lowe delivered one of the festival’s live highlights. I’ve seen Lowe several times over the years, and each time he delivers something different; the only constant is his ability to hold a musical idea for 20 or 30 minutes, and explore it from all angles without letting it overstay its welcome. This time he moved from undulating drones to a raucous, ecstatic rhythmic jam, smearing different textures together with synth and patch cables like he was using paint and a brush. 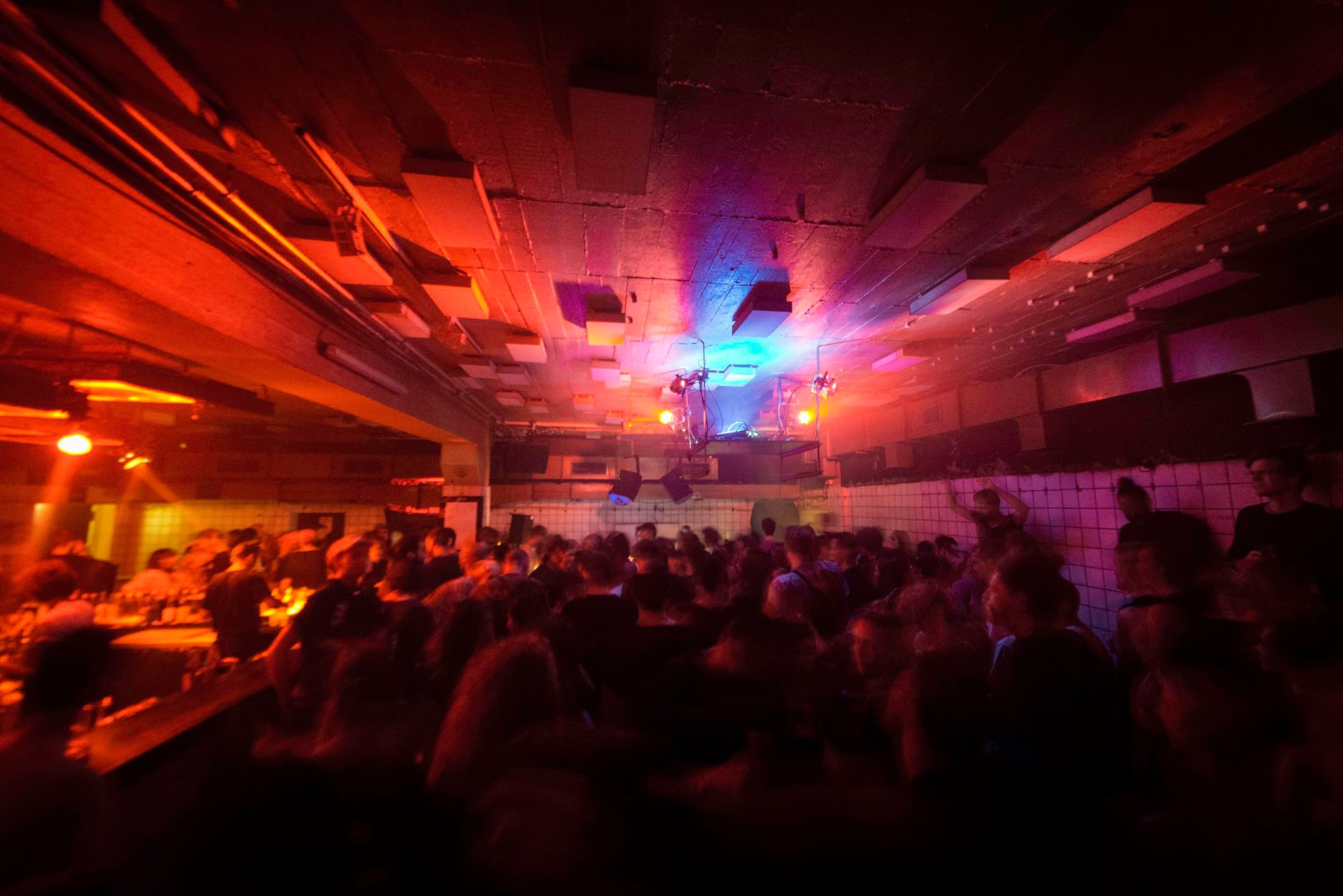 More OHM highlights came from Latvian artist N1L, whose abstract, exploratory brand of soundsystem music was a great antidote to much of the more rigid music on offer; and Copenhagen trio Apeiron Crew, whose acid-soaked set was one of the best techno sets I’ve seen in years. The strangest act of the festival for me was Killer Bong, a hip-hop artist from Japan. The veteran artist’s music lies somewhere in the meeting point between A Tribe Called Quest, Acid Mothers Temple and Lee ‘Scratch’ Perry, and yes, it was as brilliantly deranged as that sounds.

Killer Bong, along with DJ Yazi, Yousuke Yukimatsu and more, were part of a contingent of Japanese artists across the festival, many of whom were making their European debuts. Most had appeared at New Assembly, a satellite event of Atonal held in Tokyo earlier this year, bridging the gap between the techno scenes of Japan and Europe in the way that Hegemann linked Berlin and Detroit in the early ‘90s. It had a marked effect on the variety of music on offer this year, and opens future editions up to having a similarly international flavor, perhaps even from beyond Japan. Given the bleak state of global politics, the presence of music beyond European and US techno was especially welcome.

If anything, Atonal was almost too successful in programming what was its best lineup yet. Most days were marked with agonizing clashes that meant choosing between seeing the music you knew on the main venues, or discovering the artists you didn’t in one of the side rooms. It was as if there were two festivals running in parallel; I missed artists like Moritz von Oswald, Shackleton, Shed & Pinch, Napalm Death’s Mick Harris and Inga Mauer simply because the allure and the quality of the artists on elsewhere was so strong.

The festival was most successful on the days when your attention wasn’t so divided. On the final night, the first four hours were given over to Varg, a Swedish artist known for fusing techno with a black metal aesthetic. His Nordic Flora program assembled ambient trance from Sky H1, forward-facing club music from Oli XL, confrontational noise from Swan Meat and scorched R&B from AnnaMelina. It was a bracing collection of styles – not one of which could be considered techno in the traditional sense – and a microcosm of what Berlin Atonal has grown into over the past five years: an exciting, whirlwind trip through the outer limits of electronic music.