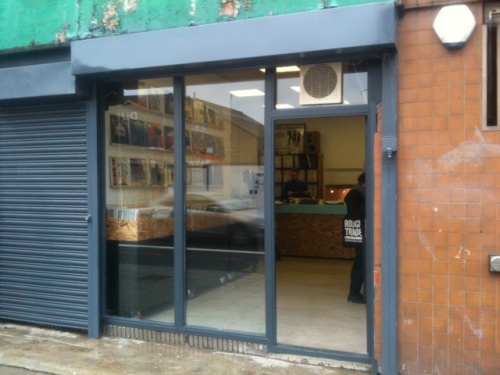 It’s spacious and airy as opposed to claustrophobic and grimy; its staff are friendly, not curmudgeonly; its atmosphere is lively rather than funereal. If it wasn’t for the ample racks and wall-displays of vinyl, you’d be hard-pressed to identify it as a record store at all. 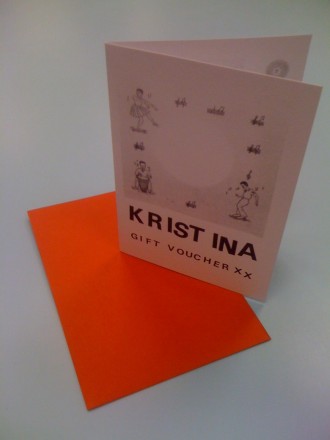 Located at 44 Stoke Newington High Street, a minute or two from Dalston Kingsland station, Kristina was founded by Jack Rollo, James Thornington and Jason Spinks – three refugees from a certain legendary, if dog-eared, Soho second-hand retailer. Before it opened its doors last summer, East London – supposed creative hub of the UK’s capital city – had no credible independent music retailer to speak of. Kristina had to happen, but it took three highly dedicated souls to make it.

It’s a store built for record-lovers by record-lovers. Rollo, Thornington and Spinks don’t stock any rubbish, everything is lovingly chosen and looked after accordingly, their choice of stock is informed and instructive – if a record has found a place in the shop, you know that will be at the very least interesting. The selection is catholic yet exacting: you’ll find anything in there from short-run cassettes by Call Back The Giants and Emeralds, via old minimal wave 45s and obscure British jazz LPs, to brand new techno 12”s from the continent and the US. This is a store that gives equal weight to brand new and second-hand, to Omar-S and Coil, to Quentin Crisp and Craig Leon. The shop-owners’ fine taste is further reflected in the regular in-stores it hosts – recent appearances have come from garage-raw indie-poppers Novella and Veronica Falls and dance music subversives like Ital, Raime and Heatsick.

FACT’s Tim Purdom spoke to Kristina’s Jack Rollo to find out how exactly a record store gets it so right. 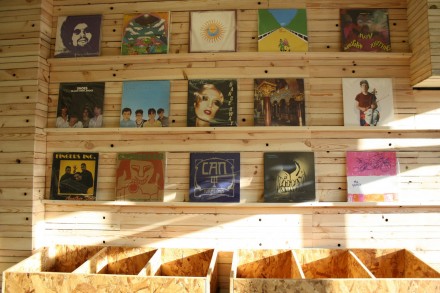 Believe in your business.

“We all worked together for many years at another shop and felt it was time to move on. I think we recognised in each other a commitment to the idea of the record shop as an exciting and viable business. “

“Location really is super-important – it’s vital for us be surrounded by a community of music-minded people. From pretty early on in the planning process Dalston/Stoke Newington seemed like the only area where the balance of rent and customers would be right to make the shop workable.” 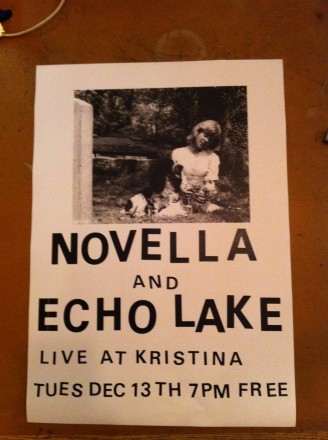 Support the scene, or create one.

“I love that we’ve found ourselves amongst an exciting group of people making records, forming bands, putting on nights and starting labels, the whole thing seems really vibrant just now. We all agreed that the record shop should be a social thing and hopefully connect a scene together, allowing people to meet, talk about music and promote their own projects, as well as buy records of course…”

Get fitted out nicely.

“We wanted to do something different to the normal, slightly scuzzy second-hand record shop. I guess we all envisaged something more like a shop you would find in the US, Scandinavia or Japan. We put a lot of time and thought into the design and worked with a very talented designer/carpenter, Paul Corcoran from Arris London, to achieve it on a pretty limited budget. The shop has to feel comfortable and approachable and project some of the ideals we’re trying to put across, and hopefully we’ve managed that up to a point.”

Stimulate eyes as well as ears.

“It’s mainly me who does the posters and flyers. I guess growing up collecting records you get very keyed into the asthetic of certain labels, it’s almost exciting to me as the music to me, especially when it comes from a DIY standpoint. Labels like Industrial, Sarah, early Rough Trade, 53rd and 3rd, Postcard, etc, have been a big influence, in that they created a real visual context for their releases, referencing other aspects of underground culture – film, literature, art, etc – to create a complete visual aesthetic to which you, as a fan, can aspire.” 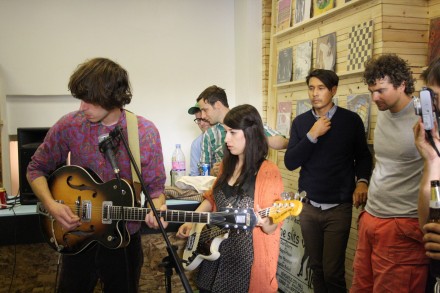 Don’t run before you can walk.

“We’d love to start a Kristina label, but we have no firm plans to at the moment. Right now it’s important to really get the shop right, and we’re learning as we’re going along.”


“We’d never carry a record that we personally didn’t believe in.”

Know and love what you sell.

“The stock is all hand-picked by us and hopefully is all of a good quality; we’d never carry a record that we personally didn’t believe in. There are certain genres that we try to stock in more depth: deep house, indie pop, African stuff, industrial/experimental stuff and psych, mainly because that’s where our own taste and knowledge lies. We try to carry a wide range of stuff but all carefully curated and well presented.”

“We source stuff from all over the place. We buy collections, we go out of town looking for records and we buy over the counter.” 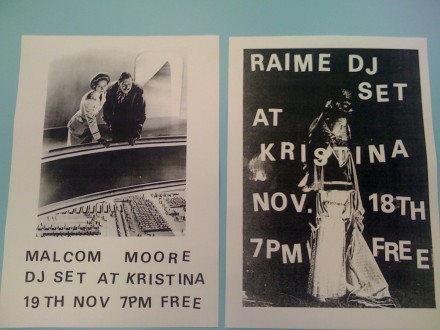 Make the internet work for you.

“The internet’s a tool like any other. Certain aspects have been super-helpful – Facebook and so on. It’s a really good way to let people who care know what we are doing. In a certain way I feel like file-sharing and downloading help the vinyl industry, making the spread of new music easier and pointing up the pleasure of owning a record as an object and the enjoyment in the ritual of listening to a record as opposed to flicking through a load of code or having a drive full of stuff you never really spend any time with.”


“In a certain way I feel like file-sharing and downloading help the vinyl industry.”

“In-stores are central to what we do, they really emphasise the social aspect of the record shop that I was talking about and it’s great to meet some of the people behind the music we love. Recently we’ve had some in-store sets from Ital, Heatsick, Raime, Golden Grrrls, Ju Ju & Jordash, Beautiful Swimmers and loads of others. It was a particular pleasure to have one of my all time favourite bands, Comet Gain, play at our Christmas party. 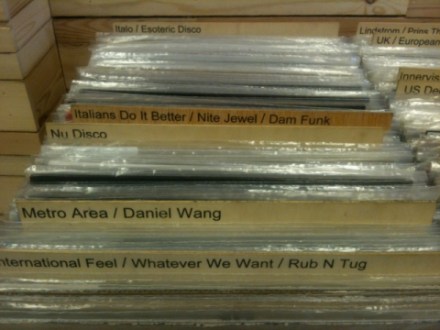 Respect the old and embrace the new.

One of the things that brought us together was a keen interest in new music, so it was always the plan to sell new records. There’s so much interesting new stuff coming out and so many old records being rediscovered and reissued right now. One of the great things about the slow death of the big music industry is that the new generation of bands and labels putting stuff out are doing it purely out of love for the music and the format, and that’s reflected in the quality of the releases coming out.”

“The whole thing has been a steep learning curve and new challenges are always cropping up. I guess selling new records is a relatively unfamiliar thing for us; we all come from a background in second-hand retail so we’re still feeling our way around the world of distribution.”


“Some people claim that the record shop as a business entity is dying, but it’s not, it’s just changing.”

“I think the most important thing is having a very strong idea of what you want to stock and how you want to present it: all my favourite shops have a strong aesthetic and you feel they really understand and believe in what they do and what they sell.”

Stay adaptable, and ignore the doom-mongers.

“Some people claim that the record shop as a business entity is dying, but it’s not, it’s just changing. We’ve found that there are still great records out there and people who are still fanatical about buying them. Touch wood, this will continue for a long time to come.” 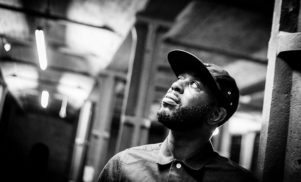 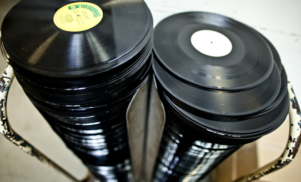 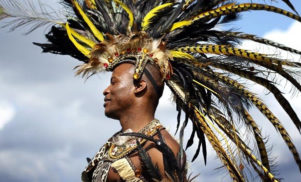 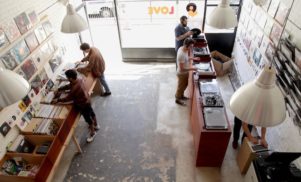 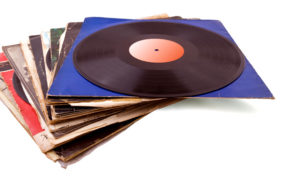 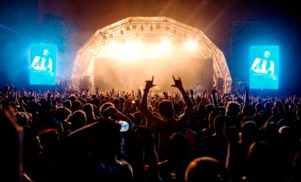 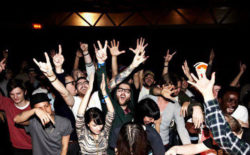 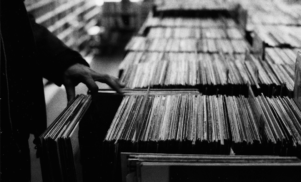