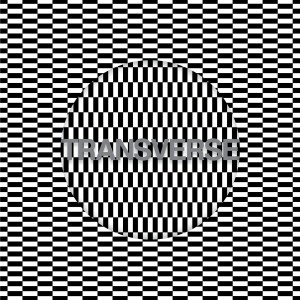 A collaboration between Chris Carter and Cosey Fanni Tutti of ex-Throbbing Gristle and Nik Void of Factory Floor was only ever going to be something of intense interest and excitement for at least two generations of listeners.

Transverse saw such an event taking place, recorded live by Mute Records as part of their Roundhouse festival series, and in continuation with their long-running association with Carter and Tutti. It is safe to say that the quality is nothing short of what you would expect from such luminaries of intense industrial ambience, as Carter controls electronics, Void and Tutti handle bowed and treated electric guitars, and the latter also contributes manipulated vocalisations.

Live performance has always been intrinsic to Carter, Tutti and Void’s various musical work, capturing a particular brute energy that only comes with context, so it makes sense that Mute would wish to use a live recording. What makes Transverse particularly satisfying as a recorded album, however, is the growth that occurs over its duration. Taking a four-part structure, each track is roughly 10 minutes long, simply titled V1 – 4. Semi-improvised material crawls around pre-defined skeleton structures, but the overall compositional arrangement organises these so that each builds upon the experience of the last.

V1 opens with drawn out textures slowly wavering over an insistent, understated 130bpm pulse. Passing through gradual waves of intensity, the predominant features are swooping chamber-reverb drenched guitar growls, pierced by smatterings and occasional intense clouds of high register metallic grains. V2 is underpinned again with ostinato, this time a thicker, filtered wood-and-metal beat, rising from guitar rattlings. Tutti’s vowel and glottal utterances float uncomfortably around these, the filtering of both parts circling each other, joined by violent guitar gestures, often repressed and drawn up short. Hissing 16th-note synthesised shaker and jangling feedback bell-tones ratchet up the tension, and even a possible error in the brief amplification of a click track is not jarring, its inclusion a satisfying question mark hanging over the decisions and course the performers are following.

V3 rotates at the same tempo with another sample-based ostinato, this time a low, didgeridoo-like synth siren, reminiscent of the T1000 theme from Terminator 2. Periodic bursts of delayed snares and metallic glinting cut through this, guitars providing subtle, clattering fragments or buzzing washes, Tutti occasionally groaning through a pitch shifter. V4 then picks up these same timbres, alters the pulse and launches into a sustained, super-oscillated tide of guitar feedback, ebbing between thick and thin in an almost dub style.

Transverse is a deep, memorable experience, the pulses in particular guiding the music’s more familiar freeform guitar timbres into areas that are less predictable. While it would also be interesting to hear this material as a studio project, treated, controlled and edited with a clinical precision, Transverse is an exceptionally immersive, expertly captured documentation of a tumultuous performance that has already earned a place in recent history.