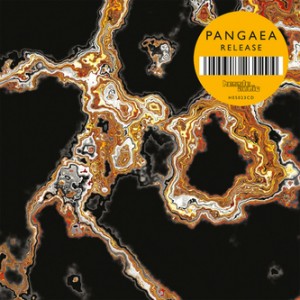 Strip down, toughen up. 2012 has seen many of the leading lights of the UK’s dance community performing the sonic equivalent of a tilt to the right. Night Slugs, possibly tiring of having to read the word “neon” in the blogs/rags, launched their Club Constructions series, designed to showcase “raw and tracky material aimed straight for the dancefloor”. Untold’s Changes In A Dynamic Environment series was avowedly “rough and club ready”. Pearson Sound’s clockwork fancy ‘Clutch’, meanwhile, had the mechanical efficiency – and, compared to previous work, the frigidity – of a player piano. Out goes ‘subtle’ and ‘speccy’; in comes ‘brittle’ and ‘spartan’.

Release – the new “double EP” from Hessle Audio triumvir Kevin “Pangaea” McAuley, and the closest the label have come to a bone fide artist album – is a suitably flinty test-case. The twinkling harmonics and micro-details of earlier work have been stripped back; the sheen has been scoured off; mood music has been substituted for rude music.

Where, say, classic single ‘You & I’ rolled over you, Release regularly pummels the listener. Atrophied jungle cut ‘Game’ is totally overwhelmed by an in-your-face sample from Missy Elliott’s ‘Work It’. The unashamedly brash ‘Majestic 12’, meanwhile, sounds like a malfunctioning waltzer. Even the record’s softest moment, ambient coda ‘High’, could feasibly be a duet between two jammed CD players.. In that sense, the record’s a little reminiscent of Lukid’s unexpectedly ragged Spitting Bile EP – less a refinement than a mid-career defilement.

To stress: this being Pangaea, the results almost always fall within the “good-to-excellent” quartile. Like his self-titled 2010 EP, Release manages to be impressively diverse without spinning out of control, veering from mangled ragga to shifty half-step. When McAuley goes hard, he hits his boss: check the jackhammer percussion and game-over bass stings on ‘Aware’. When he opts for playfulness, as on the antic ‘Trouble’, the results are at once fun and forceful. The only real misstep (the walloping, crass ‘Majestic 12’) is swiftly redeemed by the fleet-footed ‘Time Bomb’.

Proficient as it is, though, Release doesn’t have the seal of vintage Pangaea. It’s insistent, yes – but, correspondingly, it’s also surprisingly inelegant. The record’s down-to-business attitude is admirable, but you find yourself missing the wonderful viscosity and attention to detail of his best work. One only needs to think of those syrupy, GAS-like drones on early single ‘Deviant’, or the pealing feedback and throttled whispers of 2009’s career high ‘Bear Witness’. By contrast, Release sounds rough and crabby – a valid tweak, but one that attenuates McAuley’s talents rather than highlighting them. He does brawny well, but a few more vulnerable moments wouldn’t have gone amiss either.

If Release is hard to love, it might be because it often feels like a record that doesn’t really love itself.  McAuley clearly thinks hard about form and function, and there’s an off-puttingly self-conscious – ironic, even – air throughout. Take the self-de(con)struct job ‘Game’: McAuley throws down the gauntlet to his uninspired contemporaries (“Do your thing/Just make sure you’re ahead of the game”), but does so through a warped radio rap sample, arguably the most ubiquitous trick in the book. ‘Release’, despite its title, consists of an absurdly long build with a surprisingly muted payoff – less a drop that the sensation of being gently set down. There’s even a song on there called ‘Aware’; accidental, perhaps, but a neat encapsulation of why Release succeeds without ever quite triumphing.

Ultimately, Release is a paradoxical statement: at once the longest and the slightest thing that McAuley’s put his name to. It’s there in that Janus-faced title: has McAuley called the record Release because it’s intended to scrape the heights of sublimity? Or is it just another club construction, another club-ready set of changes – another functional Hessle “release?”. There’s stacks to enjoy, but, for the most part, Release bares its bones and hides its heart. Strip down, toughen up.