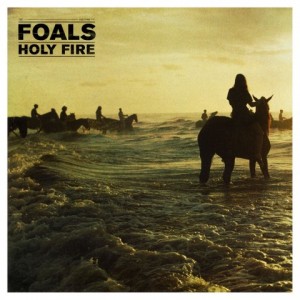 After a brief spell as the top 20’s most unlikely presence since post-punk, Foals have seemed increasingly like mainstream brit-rock’s last hope for artistic relevance. Fronted by a genuine would-be conceptualist in Yannis Philippakis, unlike their Gang Of Four-humping peers they group has persistently spurned the past, striving instead for a uniqueness which came to fruition on the genuinely original Total Life Forever.

It’s therefore a massive let down that, rather than some kind of righteous culmination, Holy Fire is by some way Foals’ least interesting record. All the warning signs were there, when in a recent interview Philippakis spouted such flag-raising rhetoric as “we wanted to be less neurotic about things sounding good” and “we wanted to hit at gut level.” Often they’ll sell it as ‘using emotion’ or ‘an exploration into man’s primal nature’, or what Philippakis himself described as finding “the humanity” in the music, but usually when cerebral theorists like Foals suddenly lay claim to the ‘visceral’, it’s symptomatic of conceptual fatigue. So, into your inbox lands ‘Inhaler’ – a killer rock song but one which irks with its overeagerness to be boneheaded fun.

Comprised of classically trained musicians, avant-geeks and modern jazz junkies, Foals were an indie band drawing heavily from formalist music: theory-driven genres where innovations in form are achieved through objectivity, almost by method of calculation. These influences located Foals closer in sensibility to the likes of This Heat or These New Puritans – bands for whom process is paramount, their compositions devised at a slight meta-distance from the facts of the song. On Holy Fire, however, the impression is that at some point or other Foals reached an impasse with this objectivity. And proving unable to generate new ideas by ‘playing with form’, they’ve resorted instead to relying on intuition to guide them. When on ‘Providence’ Yannis sings “I’m an animal just like you / O lord what can I do?” it’s as if the frontman, having faltered as a conceptual superbeing, has decided he’s merely ordinary – just the average man on the street. Its is a subtext somewhat reasserted by the almost deliberately prosaic sonics – the kind of brawnily blunt, rigid funk-rock you could see Kasabian producing should they ever go disco-punk.

Before you know it, TLF’s even balance between brainy method and romantic fancy is duly tipped askew, replaced with a flat-footed set of emotionally gushy and structurally gushing indie rock songs. ‘Late Night’ sees Yannis’s generic emoting stretched thin over vanilla comfort-rock, the song’s artlessly linear build culminating in a banally wistful chorus worthy of the Goo Goo Dolls. And irrespective of its air of existential emptiness, ‘Stepson’ is essentially the lovely-lovely kind of humdrum twinkle-indie popular with second rate Radiohead bands – hatched over a staidly gentle arc and completely forgettable, despite the shoehorned addition of a Bjorkian drum-loop. The loop, however, is but one of many lip-service gestures to art and idiosyncrasy peppering Holy Fire, including faint beds of electronica and percussion quirks (triple-time rim hits and abnormal timbres), that simply amount to window dressing for conservative rock templates. ‘Bad Habit’ in particular exposes the album for its work-a-day mechanics. Dressed up as a limber bit of dandyish sophisti-pop, below the layers of activity is an Arcade Fire-esque bass’n’kick steam train, its stodgy soul masked by staccato guitars, falsetto vox and crystalline textures.

Produced by arena rock specialists Flood and Alan Moulder, Holy Fire sounds pop sound insofar as it’s smoothed off, big and accessible. There’s a couple of crowd pleasers (most notably the Haircut 100-goes disco ‘My Number’) and an increased emphasis on melody, not to mention a complete chorus embedded into nearly every track. But if you’re talking about ‘pure pop’, in the Abba sense, Holy Fire pales in comparison to the choppy immediacy of Foals’ ACR-via-Minutemen debut, Antidotes. Aided by the kinetic energy unique to scratchy new wave, on Antidotes the band’s brilliantly inverted ditties worked towards the same tropes that make up any pop song, but without ever compromising the rules of their style or their post-punk sensibility. It’s precisely the kind of musical science missing on Holy Fire.