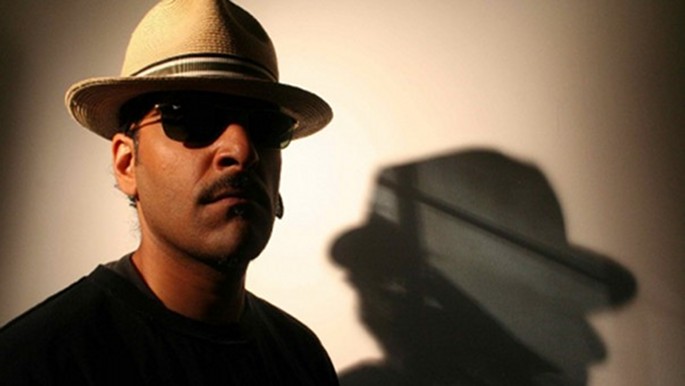 Egyptian Lover is a bit of a legend. He’s made some of the greatest 808 jams of the 80s, music that still spanks nearly thirty years on, and he’s now responsible for what is arguably the funniest, and one of the lewdest, hip hop history lessons to be gifted us via the internet. I’m referring to his recent RBMA lecture . If you haven’t seen it yet then stop everything you’re doing and dedicate an hour to nourishing your mind and exercising your laughing muscles (though maybe finish reading this column first). Favourite among a host of memorable moments is his answer to that perennial of hip hop questions: “do you rock doubles?”

This takes care of the sex puns and 808s of the title, leaving us with the new music economy. How do we leap from these to that? In the lecture, hosted by rap scholar Noz, Egyptian Lover mentions the music industry’s new status quo, talking about not stealing music and how things were when he started. Someone later asked Noz on his Tumblr about the ‘not stealing music’ point and his answer makes reference to a particular idea, the same idea that drove me to Bandcamp (and others before it) and continues to keep me there: wanting to pay people who create things I enjoy and money being a pretty good motivator to fuel that. As Bandcamp continues to make it easier for artists to sell me things – including physical things, being that I’m also from a generation that likes holding stuff in their hands before forgetting about them until I have to move house/flat – this feeling has only increased.

This new music economy we’re in is frustrating and exciting in equal parts. It’s easier to give my money directly to people whose art I enjoy and want to continue enjoying. That’s exciting, as is the discovery experience and pace of it. On the other hand independent artists’ frustration at trying to resolve the “time invested x art created = money earned” equation is increasing, in some cases probably just as fast as the rate of music being pumped out today. And therein lies the conundrum: the same technology that drives the excitement drives the frustration, be it trying to earn money from what you like to do or staying sane trying to keep up with what you love.

It’s a shitty conundrum, and no one has a complete answer yet. Steal if you want. Pay if you want. ‘Name your price’ can be applied to more than just the value of the music you’re about to download.

All that said, here are this month’s picks from the various corners of Bandcamp, including Austrian cloud rap, classical ambient, internet beats, experimental music from South America and more.

You shouldn’t really need any further proof that hip hop is a global culture in 2013. In case you do though Austrian cloud rap is a pretty good place to start. Local rapper Crack Ignaz takes Lil B’s gift to the world and applies it to his mother tongue over two productions from Lex Lugner (see what he did there?).

Despite the referentiality or not knowing what he’s actually saying, the pace of delivery and fuzzy quality of the lyrics coupled with what are some pretty banging, if obvious, beats makes for a pretty enticing, and spacy, hip-hop experience. Plus, one track is called ‘Based In The Fog’, which I imagine could make a pretty good Lil B TV sitcom spin off.

Available as a white label, hand-stamped 12” vinyl or digital.

When he’s not busy being one of the more interesting modern English authors and social commentators, Warren Ellis also discovers beautifully ethereal and strange music which he shares online. This is how I came across this album by Oathless.

Peripheral is apparently the partial result of an academic project by this Stoke-on-Trent artist, but there are no further explanations as to what that project is or was. Regardless, the album’s ambient-meets-classical vibe lends itself perfectly well to what its title implies: this is the soundtrack to a film that doesn’t exist. Using piano, guitar and synthesizers as primary building blocks, Oathless paints a sonic picture for his movie that’s at times dark and oppressive, yet always feels, somehow, optimistic. Or maybe the film does exist, and it’s one we star in each day.

Detroit’s rich musical history seems intrinsically linked to its own development as an urban centre. From its rise in the first half of the 20th century as an industrial powerhouse to its fall into dereliction in the second half, the city has given the world some of its best loved, and most enduring, music. And hip hop is no exception.

One of the nicest torchbearers of Detroit’s ‘keep it real’ attitude when it comes to production is Black Milk. His recent Synth or Soul release splits 12 fully formed beats between their eponymous sample sources. Regardless of whether it’s the more electronic or soulful jams that catch your ear, what’s apparent throughout is that Black Milk’s production chops are unfuckwitable.

Synth or Soul is the first in a series of releases titled Fuzz, Freqs and Colors in collaboration with the visual artist Upendo Taylor, whose art graces the 12” cover and compliments the music.

Available as a 12” or digital.

Tropical has been a popular adjective in dance music for years now when it comes to signifying a real or imagined South American vibe and the likes of Maga Bo have long pushed exciting blends of traditional Brazilian and ethnic music with bass-heavy, dancefloor aesthetics. That said I’ve never really thought of Brazil, or South America, when looking for experimental electronic music, especially the kind that’s more suited to mental space travelling than dancefloor sweating.

Enter Hy Brazil Vol. 2, a compilation of 14 tracks from unknown and upcoming Brazilian artists put together by Chico Dub that flirts with everything from drone, ambient and IDM to free jazz and noise. The result is rather weird and wonderful, music that works equally well as a background to everyday life as it does as a soundtrack to your thoughts.

One of the nice things about Bandcamp is that it lends itself really well to the packaging of what you could call creative overflow: music that an artist amasses in the process of creating and which for some reason or other ends up never seeing the light of day. You could argue that there’s a reason why the music was never released in the first place but that would be ignoring the (aforementioned) realities of modern music making and releasing. Plus I’m not talking about the army of faceless young music makers who are still finding their voice by dumping the contents of their creative process online.

Portland-based Gulls clearly gets this. Patterns Is Life is a collection of 12 tracks that compile sketches, live sessions and rejected demos made between 2008 and 2012. The result is surprisingly coherent and pleasantly hypnotic, permeated with tinges of dub, techno and hip hop.

I mentioned Bandcamp’s appeal to established producers and labels last month, freeing independent artists from the clutches of middle-men to reach directly into the ears (and pockets) of their audience.

This month’s case in point is Spectre, the alias of Skiz Fernando Jr, journalist, musician, cook and founder of the Wordsound label which, if you didn’t know, was as influential to the birth of ‘instrumental hip hop’ in the 90s as the likes of Mo’ Wax and Ninja Tune, though with a dubbier, darker slant to the whole aesthetic (FYI: Prince Paul’s excellent Psychoanalysis album was first released on the label).

Fernando has released nine albums as Spectre, the latest of which continues his work within the aesthetic he helped birth. The beats are crisp and snappy, the bass heavy and the samples culled from various movies and TV broadcasts adding to the overall dark, gloomy and dubbed out vibe. There are also a couple vocal turns from Wu Tang’s Killah Priest and NYC underground mainstay Sensational.

Considering how far this type of hip hop has come in the last decade, Spectre’s latest offering may well seem dated to younger ears but there are still pleasures to be found in the crevasses of his productions.

Available as a 12” vinyl or digital.

GB
3 Aspects Of One

Gifted and Blessed gives one of his rarer digital releases the vinyl treatment, adding a bonus cut in the process as well as extensive, personalised liner notes on the thought process behind the music.

In a similar vein to recent releases on All City Records and Eglo, 3 Aspects of One showcases GB’s love of analogue instruments and their potential for crafting dancefloor friendly yet meditative music. Where GB excels is in managing to make music that is more than its process or the components of said process – analogue machine music that still moves and affects in a digital age.

This month’s tag search started when I came across the “internet’” tag and thought “ha! That’ll be funny”. Thoughts of hilarity quickly turned sour when I realised that on Bandcamp “internet” seemed to more or less equal vaporwave, a fairly logical leap considering that scene’s aesthetic.

The music to be found within vaporwave leaves me mainly nonplussed so I continued to see if anything else would come up and stumbled across Sc4mmer, whose Post-Apocalyptic Synthesis instantly reminded me of the likes of Danny Breaks and Mark Pritchard circa Alphabet Zoo days or the work of people like DJ Signify: thick, crunchy instrumental hip hop, dark moods and at times heavy electronic leanings.

Once again there’s no information about the release or the artist, and the tags aren’t particularly forthcoming beyond telling us where he/she is from (“USA”) and that the music most definitely sits within the modern hip hop production canon. The track titles, however, are about as internet as they come.