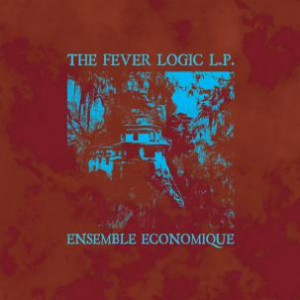 It’s incredible what a small gesture can do, and how this can be found across different art forms. Within ten short seconds of Ensemble Economique’s new album billowing from the speakers we have experienced a cinematic fade-in, from black to action, to a harrowed dream sequence where its title, Fever Logic, is entirely apt.

Brian Pyle’s music floats, shimmers and wades through tense settings that are expansive yet closely surrounded by constant movement – like activity within thick fog. Its canon is familiar, but the setting is less so; while patient, clamorous guitars and eerie, sometimes strained vocals draw natural comparisons to shoegaze, its thick electronic production points elsewhere. Foreboding synth harmonies are very reminiscent of Salem and Angelo Badalamenti, and the more delicate, hazy qualities of its textures share territory with Scandinavian techno impressionist The Field or US drone group Growing.

The rest of the album is remarkably un-fixed, even when a pulse is present. In the album’s first track ‘We Come Spinning Out Of Control’ (one of the record’s best) a half-time, delay-heavy drum beat have little to no bearing on the rest of the track’s elements. Instead, vocals and strings, cavernous guitar plucks, airy pads and random-LFO synth gurgling sway and roll freely within a wide stereo field. ‘The Night Air Burning’ takes this palette still further, focusing on a wetter, glassy ’80s ambience, removing any drums other than a heavily muffled kick. Its instruments hang heavily but rotate gently, and the addition of thunder samples and spoken word, bizarrely, only serve to make the whole even better.

The repeating keyboard riff of ‘Into Nowhere Again’ could have come from Susumu Yokota’s early work and, while flanked by breathy, panned falsetto and swirling reverbs, has the same calm, hypnotic, dream-like effect. ‘End Scene’ rounds off the album with mournful campfire half-chant half-song surrounded by brooding recordings of storm, pinned in place by anxious high keyboard string arpeggios.

Complimenting all of this is the way in which Fever Logic moves between its songs. Much like the album’s beginning, context is always derived by a quick fade-in to something that appears to have already begun, placing the listener in different environments for the duration of a dramatic scene – an endless storm drenched road, a rotting cathedral, wet marshlands by night, a sheer precipice dropping into cold clouds, or any other kind of pathetic fallacy you’d care to imagine.

In this way, Fever Logic captures all the brooding anguish that Pure X exhibited magnificently on Crawling Up The Stairs, but with a narrative similar to the kind that made Ian Drennan’s The Wonderful World so absorbing.