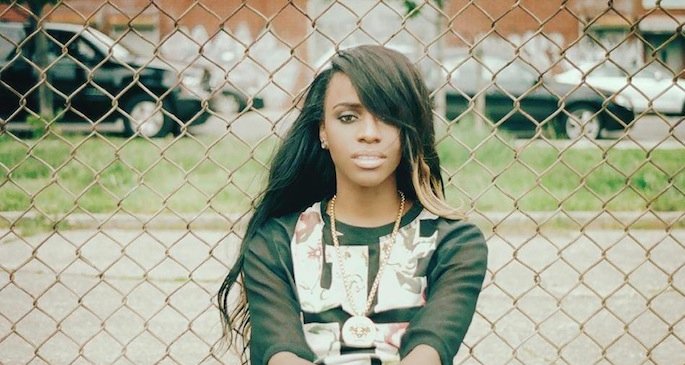 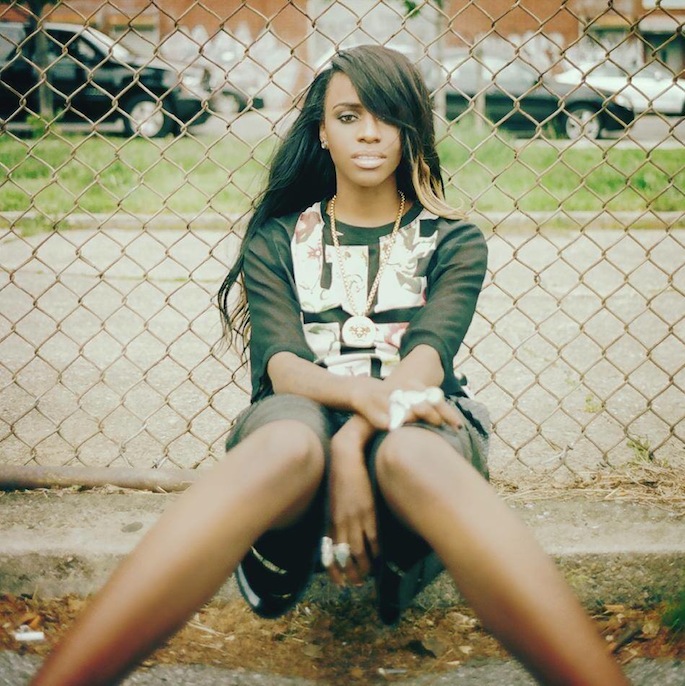 The 22-year-old has been one of our rappers to watch all year, and with debut album Dirty Gold due out soon, she’s ready to show a whole new side of herself.

Over the past few years, Angel Haze has captivated rap fans with a string of releases that have seen her deftly handle fiery, don’t-fuck-with-me battle raps and personal, often painfully-confessional storytelling. While songs like ‘No Bueno’ and ‘Echelon’ seethe with braggadocio, she has also been open about childhood struggles, recounting horrible tales of sexual abuse on ‘Cleaning Out My Closet’.

But with Dirty Gold (now due out by the end of January 2014), Haze says that all may change. “It’s kinda hard to be that person now that I’m so completely different,” she says. “I guess I’m happier, and as an artist, that means you don’t make the type of shit that seems depressing,” she laughs, adding, “And I kind of gave out all of my personal life anyway, so now it’s just about the music.”

She says listeners can expect a “lighter, more pleasant” persona on Dirty Gold. “It’s really just the album I always wanted to make but didn’t necessarily have the resources to,” she explains. “Sonically it’s totally different, lyrically as well, content-wise it’s all completely different.”

The album was executive produced by Markus Dravs (Arcade Fire, Björk), with production and songwriting by industry heavy-hitters Mike Dean (Kanye West), James “Malay” Ho (Frank Ocean), Jake Gosling (Wiley, Ed Sheeran), Greg Kursten (Kelly Clarkson, Pink), Rudimental, and Isabella Summers of Florence and the Machine. “It’s very diverse in its sound, and that’s what I appreciate the most,” she says. As for collaborations, she’ll only reveal one. “I’m the most proud of the one with Sia. I love her, she’s like my idol.”

Haze has spoken extensively about growing up in the Pentecostal Greater Apostolic church, a restrictive environment she has described as a cult. She wasn’t allowed to listen to music until her family left the church when she was 15, leaving her to fill in the blanks of a childhood musical education. “I feel that I’m always playing catch-up, but I’ve stopped paying any mind to it, you know? Like if I never hear the classics, if I never know what hip-hop means to some people, then that’s fine.”

“If I never hear the classics, if I never know what hip-hop means to some people, then that’s fine.”

The idea of influence loomed large during the recording of Dirty Gold. “I didn’t want my album to sound like anyone else’s; I didn’t want someone saying ‘oh, she’s obviously influenced by such and such,’” she explains. “I wanted to focus on the whole root of influence. Where does it come from? Who first started it? Who first influenced anyone? I can start by influencing myself, to make the music I love. That’s what I focused on… I don’t really care about the rest of it.”

Rather than being influenced by other rappers or musicians, she names authors Sylvia Plath, Charles Bukowski, John Green, and Chuck Palahniuk as inspirations, citing Palahniuk’s Invisible Monsters as a particular “mindfuck.” “I’ve been reading a lot, so I’ve spent a lot of my time developing new ideas, fresh points of view, and fresh things to write about.”

She also admits that strippers have been a source of inspiration, but don’t confuse her for Juicy J. “I think stripping is brave and incredibly endearing,” she explains. “I don’t see it as a job — I see it as an art — but it also fucks with me in a lot of different ways. I’ve fallen in love with some things and I loathe a lot of it, but it’s like a double-edged sword.”

Since signing a record deal with Universal Republic last year, Haze has been most surprised by the heights she’s quickly reached. “I didn’t think I’d be performing in the same places as Eminem, legends and shit. It freaks me out every time I do something and I’m so close to someone that I grew up loving so relentlessly.” She cites Eminem and Kanye West as artists after whom she’d like to model her own career.

“I wanted to be Eminem at one point, and I wanted to be Kanye West or be married to him or any of those things,” she admits. “I look up to them so much because they’re not afraid to say what they want to say, and regardless of how people take it, they can be relentless, like ‘this my opinion, this is how I see shit, and fuck you if you hate it.’ I think that of all the things in the world, that’s the way to aspire to be. To be completely true to yourself and your craft, I think that’s amazing and I admire it.”

“To be completely true to yourself and your craft, I think that’s amazing and I admire it.”

Notably, Kanye being true to his craft has led to forays into design and fashion, the latter of which Haze describes as a “heavy thing” for her, naming Riccardo Tisci, Donatella Versace, Richard Nicoll, KTZ, and Katie Eary as her favorite designers, but she also likes “all of the new fresh shit that is coming out that is unlike everything else.” In fact, her early interest in modelling has led to a contract with NEXT Model Management. She’s already shot Harper’s Bazaar with Karl Lagerfeld, but turned down appearances in Carine Roitfeld’s fashion book and a Benetton campaign to finish the album. “I sort of hate myself for that,” she says, “but sacrifices must be made.”

While you can add Haze to the list of rappers enthralled by the fashion world, the issue that has most intrigued the hip-hop world for the last month or so is Kendrick Lamar’s gauntlet-throwing verse on Big Sean’s ‘Control’. This isn’t new ground for Haze, who once proclaimed “I run New York”, and she has some thoughts on how being the best rapper in the Big Apple has remained rap’s highest honor. “I think it’s one of those East Coast / West Coast things,” she posits. “I guess it’s from one of those originator stances.” She continues: “People feel like they have to be the best, and New York is really competitive. It makes you want to be good, it makes you want to be the best.” And as for Mr. Lamar? “I don’t know what Kendrick meant about being the “king of New York”; I think he just wanted to ruffle some tail feathers.”

However, if Haze is to run New York, she’ll be doing it in exile: she recently moved back to Los Angeles. “I was suffering a lot of panic attacks in New York. It all felt clogged and cluttered and I just started freaking out more than I usually would,” she explains, “so I had to move to somewhere that was a lot more open.” Along with New York and LA, Haze has called Detroit and DC home (among other locales), and she describes her nomadic tendencies as part of who she is. “I have issues of staying in one place a lot of the time. I think that’s just the reality,” she says. “There’s some shit you just can’t shake.”

What Kendrick has been to rap world, Miley Cyrus has been to the music world in general. While the backlash to Cyrus’ VMA performance has come from all angles, Haze doesn’t see any appropriation (“Dancing is dancing. There are so many people who twerk, so why get so mad at someone who just wants to dance?”) and she takes particular affront to claims that such sexual behavior is responsible for things like the Steubenville rape case. “That’s ignorant as fuck, oh my God,” she says. “As far as people thinking that leads to rape, no: people who have no boundaries and disgusting people who take advantage of people leads to rape, those are hard facts.”

“It’s totally okay for a woman to show her sexuality and for her to say ‘no.’ I think Miley Cyrus should be able to do whatever she wants, however she wants, and she doesn’t have to be worried that someone will take it the wrong way, because if she’s not doing it on you, she’s not doing it for you.” After she makes her case, she sounds fired up. “I’m sorry,” she says. “I’m insanely passionate about certain things.” Based on what we’ve heard from Haze already, that’s an understatement.