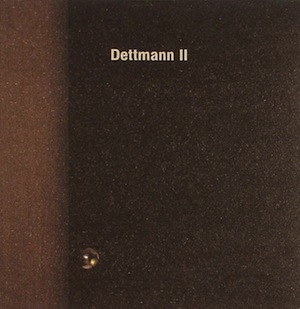 Marcel Dettmann – dishy, musclebound, often associated with the most ascetic strains of Berlin techno – is in many ways the archetypal Berghain DJ. Dettmann has been resident at the club more or less since its inception, and while other Berghain stars may have shone brighter and burnt out faster (cf. Shed’s troubled third LP The Killer), he has maintained a respectable producerly presence in recent years. Since his 2010 debut LP – a solid attempt at reaching beyond tool-techno functionalism – Dettmann has released an excellent mix CD (2011’s Conducted) and a steady stream of singles of reasonable quality, varying from the adventurous (gauzy electro number ‘Landscape’) to more solid dancefloor fare (the Range EP).

Appropriately given its title, Dettmann II is best viewed as an extension of the form and concerns of its predecessor. Taut ambient interludes serve to balance the whole – the penumbral ‘Arise’ at the opening, the rather unsettling ‘Shiver’ and ‘Stranger’ later on. Otherwise, Dettmann cleaves close to techno, shying away from full-bore 4am assault but ensuring that most of these productions meet minimum dancefloor requirements. Unfortunately, the results are often slightly timid. ‘Throb’ is Dettmann at his most reserved, its scintillating metallic textures unfolding carefully over a subdued four-four. ‘Lightworks’ is funkier, and periodic hi-hat flickers offer a hint of dynamism – but still, it’s rationed out in a coolly calculating manner. ‘Ductil’ and ‘Radar’ are supremely po-faced drone-techno; the latter is a little more robust, but no less fiercely restrained. ‘Corridor’, meanwhile, has a certain sinister intensity to it, but is monochrome almost to the point of boredom.

While none of these moments are bad per se, a compelling album they do not make. ‘Soar’ goes some way to rectifying things – its distorted kickdrums and clipped breakbeats offer the faintest whisper of rave abandon, and Dettmann juggles multiple synth motifs over its five minutes, in contrast to his usual tunnel vision focus. Otherwise, it’s down to a trio of collaborators to liven things up – a challenge that they meet with varying degrees of success. Emika supplies distant caterwauling and sotto voce moans on ‘Seduction’ – the longest track on the record, and a surprisingly aimless one given Dettmann’s usual laser-precise structuring. Closer ‘Aim’, meanwhile, benefits hugely from the presence of Shed; those claps sound as if culled from a passing thunderstorm, and the serene pads are a rare moment of colour in an otherwise stringently monochrome album.

Finally, ‘Outback’ features input from Levon Vincent, and it’s tempting to hear the New Yorker’s fingerprints in the rich, billowing dub chords that almost overbalance the mix at the midpoint. It’s just a shame that the whole thing, at under three minutes in length, is over almost before it’s begun. Dettmann II is a technically proficient record, sure, but a remarkably subdued one, its charms buried so deep beneath its murky surface as to be near-imperceptible. Perhaps a producer like Vincent – erratic, sometimes brash, but often brilliant – could teach our man a thing or two.