Dig deep enough online, and there’s plenty of under-the-radar Hebden tracks from the vaults that never got the same spotlight or even official releases but still glimmer with the same excellence as his most acclaimed work. We’re talking lesser-known remixes, pre-Dialogue material, unlikely commercial bookings and “secret” side-projects (and, for the record, we don’t mean this one).

After some extensive ruminating and digging, we’ve assembled our pick of ten of Hebden’s overlooked triumphs. From Fridge through to Percussions, these are Four Tet’s finest deep cuts.

Hebden’s first single as Four Tet wasn’t the folktronica miniature or honey-scented head-nodder that the casual fan might expect. Instead, in keeping with his Fridge contributions, Thirtysixtwentyfive is a 36-minute instrumental suite, reminiscent of Tortoise (or, more explicitly, offshoot Isotope 217). Decorated with woodwind, brass and wind chimes, it’s a lovely composition, and shows Hebden working on the sort of large-scale canvas he wouldn’t really return to until his mid-2000s experiments with Steve Reid.

Hebden’s familiarity and obsession with 2-step is now well known, but back in ’98 – when the genre was still a pop concern (the Artful Dodger’s chart-beating ‘Re-Rewind’ came a year later) – few were fusing the sound with anything even bordering on being ‘experimental’. Trust Fridge to blend the genre’s unmistakable hiccupping drums with TNT-era Tortoise-influenced jazzy flourishes and the kind of airy jangle Hebden eventually made his calling card. If one Fridge track represents everything Four Tet would come to represent, it has to be ‘Kinoshita’.

Back in 2000 when this little gem appeared on the Leaf label, it was Pole who was the big name – Four Tet was simply ‘the bloke from Fridge’. His re-interpretation of Pole’s ‘Heim’ embellishes Stefan Betke’s unmistakable broken crackle with skipping drums and the kind of rolling music box piano that would eventually help to characterize Hebden’s best-loved tracks. Hebden’s ability to balance his appreciation of dance and experimental music without coming across as cynical has been his strength from the very beginning, and rarely is it displayed so effortlessly.

With his taste for syncopated drums and finely diced samples, it’s no surprise that Hebden is a life-long UK garage fan (as his penchant for dropping ‘Sweet Like Chocolate’ into DJ sets attests). On this 2000 remix of London nu-jazz duo Two Banks of Four, he takes a scalpel to the original’s smoky vocal and scatters the jagged remnants across a hyperactive 2-step beat to produce one of the most club-ready tracks in his catalogue.

This 2001 remix of a cut by Slag Boom Van Loom (aka Speedy J and Mike Paradinas) sees Hebden working well within his comfort zone, applying what had by then become his signature sound – jazzy drum patterns, reversed samples, an air of slightly crumpled bookishness – to a gently drifting track, adding a dash of melodica for some winning retro charm.

A single from Aussie singer Sia’s third album Colour The Small One, ‘Breathe Me’ was released with an impressive remix package – Mylo, Ulrich Schnauss and Dan Carey all lent their touch to it – but Four Tet’s remains a classic vocal moment from his catalogue, particularly in the track’s second half when staccato synth hits really let it take off. 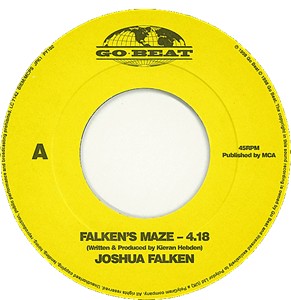 Released way back in the pre-Dialogue wilderness, ‘Falken’s Maze’ is the Kieran Hebden coldwave track you never knew existed. Considering how often Hebden returns to the tones and textures of his early work, his effort as Joshua Falken is a genuine anomaly. EBM throb and ersatz string pads are the order of the day, with a surprise electro breakdown slung in for good measure. Sits alongside Daedelus’ ‘Hrs:Mins:Secs’ jn the elite club of tracks inspired by 1983 techno-fable War Games. It’s not easy to find these days, but if you can track it down, it’s early Hebden gold.

In which Four Tet takes a highlight from Dear’s Asa Breed and comes out the other side with a remix better than any of the album’s originals (‘Don and Sherri’ stans, pipe down). People often talk about restraint being key in dance music, and although there’s truth in that, it also can become a cliche – we’ve all listened to too many tracks in our time that simply don’t have the balls to go for broke. Four Tet, however, gets it like few others: his remix of ‘Deserter’ spends almost five minutes on the edge of something life-changing, the tension building with every arpeggio and key, until bang – that first fucking kick drum. It hits you like a heart-attack, and it’s just incredible.

Much has been made of Four Tet’s interaction with dance music in recent years, particularly in the period surrounding his FabricLive mix (though, as this article shows, he’s been making dance music since the 1990s). It always seemed odd, then, how this 12″ slipped under the radar – in simple terms, it’s Four Tet making loop techno with dashes of both the subterranean Ostgut-Ton sound and Karizma’s rhythms, and for us it’s one of the most effective dancefloor cuts of his recent run.

Ever hear the one about Four Tet contributing to a Bond film? Speaking to New York Magazine at the time, Four Tet explained how the commission came about. “They contacted me and I went and met David Arnold, and he played me the all the multitracks from the sessions, and I just took away whatever sounds I wanted. I think I had, like, a day to make this piece of music—the deadline was really tight.” Easy solution to that sort of deadline? Draw for the brushed snares, reverse a couple and make it sound exactly like Four Tet. Lovely stuff.