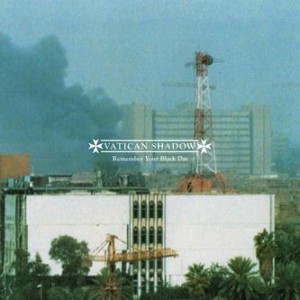 Travelling in Asia this autumn, cut off from the familiar information fix of wi-fi internet and plentiful freesheet newspapers, I followed a terror attack at a shopping mall in Nairobi, Kenya through the strange filter of the 24-hour news channel. Experienced in moments of tired decompression in a procession of identikit hotel rooms, the rolling news format gives atrocity a strange, surrealistic rhythm. Fresh information is dropped in half-hour repetitions that, to a dazed holiday brain felt weirdly reminiscent of dance music, each new twist in the official story deployed like a fresh synth layer or new hi-hat motif delivered at the top of each bar. CCTV shows gunmen open fire at shoppers. Kenyan forces mount assault to end siege. Interpol issues arrest warrant for ‘White Widow’. In its tone and pace – of horrific atrocity mediated via the pseudo-objective soundbites of the newsroom – it felt very Vatican Shadow.

The arrival of Remember Your Black Day marks the first official album by Dominick Fernow’s “militant religious industrial” project, which commenced in 2010 with the Byzantian Private CIA cassette, a release graced with the image of Nidal Malik Hasan, the US medical corps officer who shot dead 13 colleagues at the Fort Hood base in Texas in 2009. Fernow’s grounding is in the piercing feedback and searing distortion of noise and power electronics, an approach exemplified by his long-running project, Prurient. As Vatican Shadow, though he investigates a sort of brut techno, one characterised by grinding tank-track beats, melodies that drift like searching laser sights, and muffled distortion blare, like a distant roadside speaker broadcasting a call to prayer.

Fernow’s approach has refined over the course of 20-odd releases, though, and if noise-techno is very much a fertile genre at the close of 2013, Remember Your Black Day wants no part in it. Working with assistance from Silent Servant’s Juan Mendez, Fernow has composed eight productions that occupy a more ambient and evocative space. This is music not so much about war as its aftermath, a haunted and shell-shocked no-man’s land characterised by clanking, metallic percussion and shimmering synth repetitions that hang in the air like clouds of flak. On ‘Tonight Saddam Walks In Ruins’, drums march in a strange step as distant snares rattle like machine gun fire, while ‘Contractor Corpses Hung Over The Euphrates River’ resembles a sort of gothic Autechre, rhythmically hypertense but with a slow-blossoming melody that’s almost plaintive in its barren beauty, like flowers poking through rubble.

Elsewhere, Black Day suggests Vatican Shadow is undergoing more lateral progressions. ‘Enter Paradise’, curiously, has the ring of black metal – another genre Fernow has a foot in, through his membership of groups Ash Pool and Vegas Martyrs – although its spidery, guitar-like riffs and stomping backbeat never quite lean forward into a flurry of kickdrums and corpsepaint screech, recalling more the ghosted cries of outsider BM star Xasthur. Just one track, ‘Not The Son Of Desert Storm But The Child Of Chechnya’ reaches towards the jackhammer intensity of the Vatican Shadow live shows. The album’s track titles, apparently, are cribbed from The 9/11 Commission Report, and you think of that when the track is yanked off suddenly four minutes in, giving the impression of some shadowy imposition, a hijacker’s hand grasping for the controls.

Some critics have sought to explain Vatican Shadow as a critique of western imperialism, as if with a bit of intellectual jockeying this work might slot into a familiar protest song tradition. Others have experienced the live shows and recoiled, seeing Fernow thrashing around behind his spooling tape decks, clad in desert night camouflage jacket, as some sort of grotesque celebration of brute American might. Seems to me, though, that Fernow has gone out of his way to blanche his subject of all sense of politics in search of something deeper and, in ways, more base. As Prurient, Fernow constructs collage artwork that intersperses mundane imagery with sadomasochistic pornography; here, torn newspaper clippings sit alongside pictures of scarred middle-eastern cityscapes, black smoke looming from behind palm trees. The commonality here is an obsession with murky power relations. In Prurient, the fascination is sexual, the interplay of domination and submission. In Vatican Shadow, it manifests in hidden diplomacy, murderous liberators, and intractable factional warfare.

In a way, with his obsessive twining of visuals, sound and aesthetic, Fernow reminds me of a sort of industrial counterpart to the BBC filmmaker Adam Curtis, whose documentaries talk of collapsing metanarratives and the modern condition of horrified impotence he calls “oh dearism”. Fernow lacks Curtis’ paternalistic optimism, but asks essentially the same questions: who can we trust, now we know the good guys don’t really exist? The fog of war left the battlefield and entered our heads, and Remember Your Black Day is about that feeling of grim portent, the cold fear that leaks in through your TV screen, the dread that hunts you down, even as you sprawl on a sun lounger and sip your cocktail and stare out at the sea.