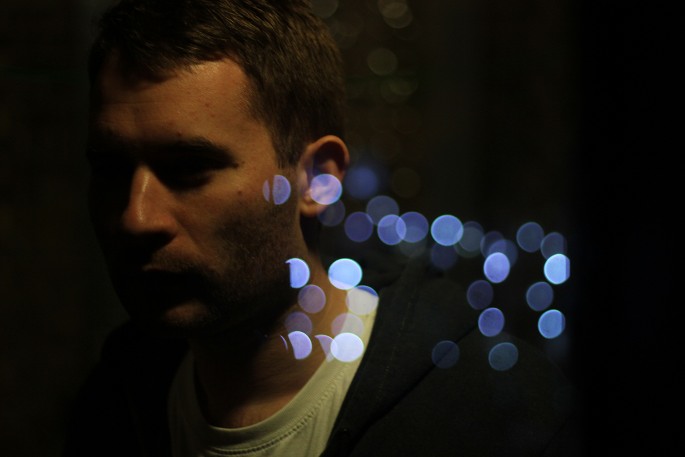 Keysound – the label run by Blackdown and Dusk – has had a banner year, and Logos’ Cold Mission is its crowning glory.

Not so long ago, an LP from this low-key London-based producer seemed like an unlikely prospect. His Kowloon EP, also for Keysound, was delayed for months before finally surfacing last year. The careful patience of the music – an abstracted take on grime inspired by Wiley’s beatless Devil Mixes – seemed, in this case, to reflect the character of its creator.

In fact, the Lincolnshire-born James Parker has been waiting in the wings for far longer than that. Having moved to London over a decade ago, he has closely followed the capital’s dance music culture since late ’90s jungle, taking a keen interest in both grime and dubstep’s golden ages. All of these styles can be heard on Cold Mission, a record which follows the implications of Kowloon to their stark, exquisite conclusion. FACT’s Angus Finlayson caught up with Parker – who, incidentally, has just turned in hands-down one of the best FACT mixes of the year – after a hard day at work to discuss minimalism, grime romanticism, and grime’s recent revival of fortunes.

“I was trying to integrate the more suspenseful or ambient things you get in jungle, with the mechanical structures you get in grime, but without necessarily the punk element”

Is it difficult to make time for producing around your day job?

Yeah it’s kind of difficult. You have to be quite disciplined. One of the things about working is you don’t have to rely on music for your income. Which means you have a bit more spare cash, perhaps – certainly more than than someone in an underground music scene. So I decided I was going to get a studio rather than produce at home. This was about a year and a half ago. And that made a huge difference – that enabled me to write the album.

Are you a slow worker generally?

I was a slow worker. I spent a lot of years working slowly, doing bits and pieces. I’m a lot faster now. I don’t know why.

Do you it was partly about finding your sound?

Yeah, I think it probably was actually. Because you can hone in on things – your sense of where you want to go. Doing the EP for Martin [Clark, aka Blackdown], for Keysound – Kowloon – sort of set a template for me to explore. I think that probably helped a lot, [in terms of] working faster.

How long has the album been in the works for? Did you start work on it as soon as Kowloon came out?

Martin talked to me about doing one around the time that Kowloon came out. He gave me a rough timescale. I think I started to work on it really seriously about the time I got the studio, which was summer 2012. The last track I finished about a week before we got the thing mastered, so it was right up to the wire.

You seem to be saying that you were very much expanding on the ideas laid out in Kowloon. Is that how you saw it – following this idea to its logical conclusion?

I was, but it was more about pushing the concepts, rather than necessarily the sounds. What’s happened since Kowloon – I mean I wasn’t the first person to start writing with square waves and that sort of thing, at all. But there’s a huge amount of amazing producers around making these amazing Devil Mix-type tunes. People like Strict Face and Inkke, people who we play at Boxed [the London night co-run by Parker]. So I really wanted to try and push something slightly different. It’s more the concept: the minimalism you get in a Devil Mix, the wildness of the bass pulses and things like that, but with a more geometric vibe – a kind of architectural sense. Do you know what I’m getting at?

And long, almost static sections. I listen to a lot of US minimalism – Steve Reich and Philip Glass, people like that – and they have these long, hanging structures in their music that develop quite slowly. If you visualise them they’re almost like a plane – like a static plane in space. They’re the kind of ideas I was thinking when I was making it. I often worry with my tunes that the production subtleties or finesse, things that you might expect every four or eight bars to keep the listener interested, aren’t there. But I really like music where you’re forced to listen to repetition – you’re a little bit challenged, because you’re thinking, “Well, this is what I heard 16 bars ago”. So I was forcing myself not to put too much in there – to really trim the fat right off it.

Some of the tracks sound to me like jungle breakdowns without the stuff either side. I understand you followed jungle closely in the late ’90s and early 2000s. Was that something you had in mind?

It was. I suppose I was trying to integrate some ideas from jungle, the more suspenseful or ambient things you get in jungle, with the mechanical structures you get in grime. but without necessarily the punk element [of grime]. Some of the dancefloor tracks are kind of 8-bar-ey, but the rest of the album’s not like that.

But yeah, jungle’s definitely there. I’m sat, while I’m talking to you, looking at my record collection – its about 75% jungle, ’94 to 2004/5 – after it was unfashionable to like it as well. You have these amazing things in Optical or Grooverider tunes, or Metalheadz – these atonal chords. I actually think there’s a lot of similarities between that music in ‘96, ’97, ‘98 and what people like Youngstar and Wiley were doing. Just in terms of the – it’s not quite the right word, but – the atonal-ness of the sounds, and the vibe of alienation. That hangs over absolutely everything I do. And there’s quite a few samples [on the album] that you can probably tell are from jungle tunes – little things to make you remember, and think.

There’s a collaboration with Rabit on the album. It strikes me that the two of you have a lot of similarities in terms of your use of space.

I like the extremism – if that’s the right word – of Rabit. He’s dialling grime down to its utter, utter essentials. Further than anyone’s really ever dared to take it. That tune ‘Satellite’, on the Keysound compilation, is basically just bass pulses. But it really works. And he can tear it out – he can do a more 8-bar, drum-oriented tune. I like him because of his militancy, but the grace with which he does it as well. And he’s a bit of an enigma as well, there’s not many things about him on the internet.

I wanted to talk about the track ‘E3 Night Flight’. There’s obviously a tradition of music that romanticises London at night – Burial being the most notable example. How would you describe your relationship with London? You’re not from there originally, right?

Yeah, I’m from up North – the very Northern part of Lincolnshire. I’ve lived in London for 11 years. I have quite a good relationship with the city. In terms of the personal links you make with people – which is the way to really connect with people in terms of getting your music across, having access to opportunities – it’s been really positive. If you’re white, vaguely middle class, and live in East London, it’s not a bad place to live. The pressures that are on you are not the same pressures that are on people who are on the breadline.

As far as romanticising it, there’s a strain in grime which is actually quite romantic. Two of my favourite grime tunes are Sharky Major vocals – one is ‘This Ain’t a Game’ with Jammer, which is kind of positive, poignant. Then there’s the ‘I Luv U remix’ with Wiley. Which, considering what it’s a remix of, is a really sweet tune. I read Dan Hancox’s book about Dizzee Rascal, and there’s interesting stuff about that dichotomy, where you’ve got Canary Wharf [right next to] E3, Bow. In one sense it’s a big Thatcherite two fingers to one of the poorest boroughs in London. But on the other hand people who grew up there kind of look there with an element of aspiration. There’s that duality with London.

Last question: with all these new grime producers coming through, do people ever tell you that the Kowloon EP was a big influence on them? Do you feel like you inspired people with it?

I don’t know. It’s one way of looking at things. But I was influenced by different people – I can’t deny that the things Zomby did for Martin Clark’s Rinse show in 2009 or something were quite influential on me. And what Jam City was doing, people like that, earlier on – way before Classical Curves. These people open your eyes to possibilities, and it’s up to you to run with them. People have said that ‘Kowloon’ or ‘Atlanta 96’ were quite important tunes for them. That’s really gratifying if it’s true. But you’re always swimming in a big nexus really – there’s lots of things going on at the same time. ‘Scenius’ is the word, isn’t it?