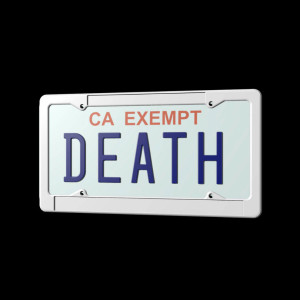 In the field of heavy electronica, it is a tour de force, and also an empty cackle. It is a thing of live-wire verve and grim low-end hysteria, as mocking, and as cruel, as it is completely bad ass. It is almost peerlessly exhilarating; the word is ‘searing’. The opening track from Government Plates – the new mix-tape from Sacramento rap act Death Grips – is quite brilliant.

But moreover, it’s a sign of things to come on Government Plates. While as nasty and debased as ever, there’s a newfound zeal to the Californians’ approach here. Counter to the defeated inertia that defined No Love Web Deep, with its pitch black hopelessness and noble solemnity, Government Plates‘ brisk, light-footed playfulness sooner speaks of gleeful irreverence. A less macabre, less haunted sound, Government Plates sees the Sacramento neo-rap unit striking a brand new tone: one you’d describe as ‘excitable’.

On ‘I’m Overflow’ the smash-cut transitions between languid acid-rap and bursts of junglist futurism demonstrate a kind of punchy efficiency that No Love Deep Web lacked, while ‘Whatever I Want (Fuck Who’s Watching)’ – a title that could serve as the perfect tagline for Government Plates – is again incredibly vibrant even by Death Grips’ standards; mainly on account of its aping of cult beat-maker AraabMUZIK, whose stupendously electrifying techniques the track re-appropriates many times over.

Government Plates marks the band’s fourth consecutive album of extremely strong material. That said, it’s not without its flaws; the same flaws, in fact, that hampered No Love Deep Web. As with No Love. Ride’s vocals too often comprise of disfigured rabble-rousing and indecipherable rage, whereas the MC’s working method was before sharp and detailed. Acutely visual and richly imagistic, Ride’s former style worked as a kind of overture with which the band could convey the songs’ themes, or map out Death Grips’ core ethos in ways that the sonics could not. But stripped of that utility (sometimes completely so – what with Government Plates‘ glut of instrumental tracks), the music seems now vaguely blank, or at least ill-defined, in terms of message.

Fortunately, like any art sound worth its salt the music has its rich subtext to fall back on. Rested on the tension between rampant futurephilia and the spiritual misery that the technology of that future engenders, the sonics – comprised of that by-now familiar techno-macabre trade-off between the primeval and hyper-evolved – speak loud enough on their own, vividly evoking the primal fear and fracturing of consciousness peculiar to this, the era of the post-human. That said, it wasn’t just conceptual substance that Ride’s style brought to the music. The clipped, telegraphic nature of his flow, together with the corrosive clarity of his penetrating imagery, also spoke of control and lucidity, which in turn afforded the band an intelligence, a sentience, and artistic shape. Without that element, the music occasionally comes across as knuckle headed, meaningless aggression.

But Government Plates’ primary flaw concerns its tendency to overload on musical ideas. Too often the tracks chop and change with impunity, flitting between random flourishes and isolated sections, resulting in scattershot trajectories that render the music disparate and the music’s central premise unfocussed. ‘Two Heavens’, for example, appears constructed entirely from drummer Zack Hill’s erratic whims, while the episodic and stilted ‘Big House’ is basically a nothing track – a sketchy amalgamation of jam session ideas that cuts arbitrarily between speeding hardstyle house, crawling 808ism and tech-step without purpose or point.

Frustratingly, while the structures are overstuffed the production is actually pleasingly spare, especially compared to the obfuscating density the band have favoured in the past (particularly on The Money Store). ‘Anne Bonny’, for example, is a stripped-back, ‘Guillotine’-esque prospect, centred on a minimalist kick-snare set-up, while ‘Bootleg (Don’t Need Your Help)’, composed mainly of repeated loops and bare drum programming is skeletal and clinical. In addition, you could argue that the chaotic structural dislocation on Government Plates is firmly of a piece with the band’s reoccurring themes – particularly the impossibility of control in the digital era, or the dire psychological effects of information saturation. Ultimately though, Government Plates is sometimes just incoherent. And no matter how compelling the track, this incoherence is always a deal breaker.

But in the end these are minor quibbles. Though the hype surrounding this band has long since fallen away, have no illusions: three years on from debut Ex-Military, Death Grips are as vital as music gets.