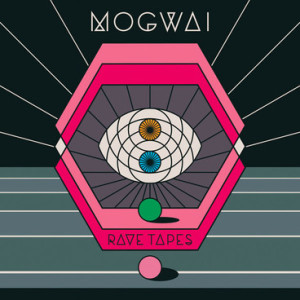 Sometimes all it takes is the right snare, and you’re away – and 52 seconds into this album there it is.

It’s not even a particularly unusual snare, and it’s certainly not extreme or distorted. But it really is the right snare: it spanks so crisply against the wobbly chimes and electric piano that form the intro to ‘Heard About you Last Night’ that you just know that Mogwai are onto something good. The rest of that track unfolds in waves of synthetic strings, purring distortion and stately drumming, and it’s great. ‘Simon Ferocious’ follows, and it’s a menacing Krautrocky thing, sort of like Stereolab getting ready to go to war. ‘Remurdered’ has the motorik thing going on too, and a sense of dark drama, but it has a curiously jaunty keyboard line that’s somewhere between a highland jig and something from early Squarepusher. And so it goes on…

It just sounds like they’re having fun. I had kind of thought that their most recent stuff, the soundtracks to Zidane and Les Revenants, showed them settling into maturity: shaking off the noisenik stuff and getting into stately menace with acres of space and moments of extreme beauty. And that was great, in fact I liked it more than most of their ten-tons-of-guitars overload. Mogwai really suit cleanliness, even their noise is sharp and clean round the edges, and it felt like the less they had going on the more that clarity could be appreciated. But here it seems like they’ve decided they’re going to build something entirely new onto that scaffold, and so they chuck keyboards, fake strings and funny samples all over the shop and it really, really works. There’s enough space so seemingly little things – like that snare – can take on great importance, but they also splash on a whole lot of bold colour, and even overt humour.

‘Deesh’ has a Moogy one-note riff that threatens to turn into acid but never quite does. ‘Repelish’ has samples of an earnest fruitloop talking about Led Zeppelin’s satanic message, playing excellently on the musicality of his affectless voice. ‘Blues Hour’ is a more conventional shoegazey thing but has VOCALS! There are plenty of noisey bits, plenty of bits of melancholy ecstasy and plenty of doomy bits, but the overwhelming feeling is that Mogwai are really enjoying trying out what they can be as a band, and it’s exciting to listen to. The last track, ‘The Lord is Out of Control’ takes it furthest with dreamy vocoders, electronic drums and massive swipes of backward reverb; it sounds a little bit like a heavily beefed up version of Aidan Moffat’s Lucky Pierre guise, it’ll give you tingles, and it strongly suggests that there is a whole lot more reinvention still left in this band. This album is not just exciting for its sound, but for what it promises too.