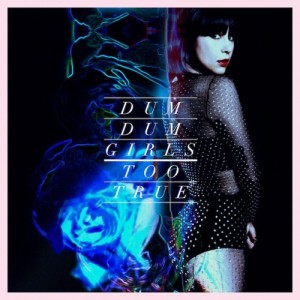 Think hard: when was the last time a contemporary art-rock band did anything halfway original? Ideally, originality should be a given if you’re talking about proper art, but it feels like today’s generation of bands purporting to be ‘art-rock’ have given up even trying.

Death to this never-ending regurgitation of reverb-doused, Spector-ist goth shite: the single most overused retro idiom in fringe guitar music today, followed closely by ’80s-obsessed post-Siouxsie pop. That Dum Dum Girls have been involved in hawking not one but both styles – graduating to the latter, as many contrived millennial goth acts have before them, on their third album Too True – speaks volumes.

From their embarrassingly demonstrative name and tired Spector-girl image to their banally on-the-nose, painting-by-numbers pastiche of goth, Dum Dum Girls represent the very nadir of record collection rock. Worse than that, they’re the nadir of millennial record collection rock: revivalists of a revival and doubly as soulless. Shallow, uniformly uninspired and completely unremarkable, Too True amounts to little more than a succession of cliches and wall-to-wall empty stylisation, with the femme four-piece seemingly unaware that mimicry is not art, and nor is seriousness the same as being a serious artist.

‘Are You Okay’ plays like a slightly moony, slightly moody Belinda Carlisle song, while ‘Little Minx’ channels Sisters Of Mercy but with none of the freak authenticity, because Dum Dum Girls are about as authentically goth as Dale Winton. Throughout the album there’s a sense that the group wouldn’t know real alienation if it bit them on the ass, and that deep down they’re as normal as toothpaste. True goth, for all its self-aggrandising lustrousness, was as much a rebellion as punk. This is nothing like that.

The group don’t even have the good grace to keep up the act, ditching their mechanic posturing and paper-thin halloween-y pretence at the drop of a hat on tracks like ‘Too True To Be Good’, a full-on chipper pop tune with as much troubled misfit exoticness in its soul as Mel and Kim’s ‘Respectable’. Likewise, ‘Lost Boys And Girls Club’, with its anodyne approximation of scruffy girl-grunge and its sub-Coldplay guitar line, channels goth’s core eroticism and sense of vainglorious artifice as convincingly as The Levellers might.

Band leader and chief songwriter Dee Dee Penny – whose husband, tellingly, fronts the heinously retro Crocodiles – remains a wiz with hooks, memorable melodies and slickly constructed tunes (curtain-closer ‘Trouble Is My Name’ is a very effective ballad). But, let’s face it, that’s also the case with a thousand corporate synch shills – most of whom are just as unoriginal.