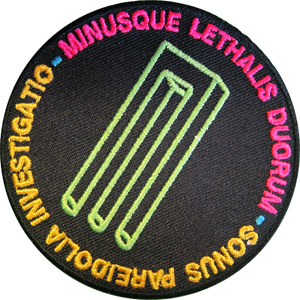 Recently I, like many others, have found myself drawn into the mysterious world of top secret US military units thanks to Trevor Paglan’s I Could Tell You But Then You Would Have To Be Destroyed By Me. Like Laurel Halo, whose Behind The Green Door EP at least partly references them, I’ve become fascinated by their complex insignias – a mixture of symbolism, grim messaging and humour as black as their operations.

The EVOL-helmed ALKU Records have found themselves transfixed by this too. So much so, in fact, that they have created their own Black Ops patches (yes, really) and released them with a digital download, Less Lethal Vol. 2. A compilation of recent and new works from a veritable Who’s Who of cult computer musicians, the collection takes inspiration from the rumoured sonic activities of US military factions – encoded messages, aural disorientation and the pseudo-science of subliminal suggestion and paraeidolia.

Goodiepal’s subliminal flamenco from his Music To Playback Lecture By! is a riot. Time Against Frequency’s ‘The Coming Of Night’ destroys a loop of the ominous DWP TV ad: “We’re closing in on benefit thieves who claim they live alone”. And on ‘There Is No Mountain’ Wobbly subtly manipulates and re-works ‘Ain’t No Mountain High Enough’ into unsettling hilarity.

John Wiese’s ‘Gunfire’ has been borrowed, a bristling grand guignol collage of firearm recordings, conceptually similar to Christian Marclay’s Crossfire. There is plenty more on offer too, but special mention should be made of Florian Hecker, whose edited contribution from the sound installation work ‘Neues Synchrophon’ is typically stony faced and fascinating.

As with everything EVOL and ALKU-related, Less Lethal Vol. 2 prods and pokes and offers a lot in return if you like a challenge. Equal parts garish fun and confrontation, to even find out how to download the music you have to solve a code, printed in ASCII on slime green card, housed in a wax-sealed envelope. How do you solve it? Well…