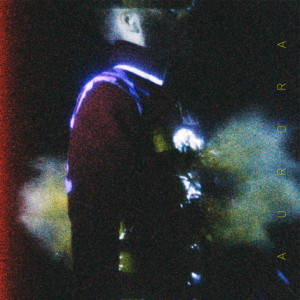 A U R O R A is Ben Frost’s first solo album since 2009’s By The Throat, and his most accomplished yet. In the intervening five years, Frost has worked under the mentorship of Brian Eno and taken on an impressive range of projects, from composing the score for Julia Leigh’s film Sleeping Beauty to having a hand in recording and producing Tim Hecker’s Ravedeath 1972 and Colin Stetson’s New History Warfare albums, and writing and directing an opera based on Iain Banks’ novel The Wasp Factory.

For The Enclave, a video installation piece, Frost travelled with artist Richard Mosse and cinematographer Trevor Tweeten to the Democratic Republic of Congo. They filmed the war-torn region with infrared film that cast the people and landscape in a gorgeous palette of pink and purple hues, and Frost made the field recordings that would form the basis of the score. While Frost wrote a good deal of A U R O R A on his laptop in the DRC, “under the threatening gaze of the very active Mount Nyiragongo volcano”, according to the text accompanying the release, it is a separate entity from The Enclave; a self-contained project rather than a score or commissioned work. Completed with contributions from multi-instrumentalist Shahzad Ismaily and Thor Harris and Greg Fox on percussion, it is also Frost’s most heavily synthetic work to date, where the familiar timbres of guitar and piano are rejected in favour of harsh, ambiguous tones.

Propelled by towering synth arrangements, bursts of noise and thundering drums, tracks lunge forward and stop abruptly, or fade away unexpectedly. Many, such as ‘Nolan’, with its colossal rave synths and blistering distortion, have an epic, widescreen feel, which Frost offsets with intricate detail and quiet, ominous passages. He is less omnivorous here than on By The Throat, which drew on about a dozen genres, but here his limitations – no doubt at least partly down to the circumstances of writing – do nothing to lessen A U R O R A’s impact. The anthemic ‘A Single Point Of Blinding Light’ is a case in point, its screaming trance loops, brutal percussion and thread of searing white noise bringing to the surface a latent horror, while ‘Venter’ is A U R O R A’s dramatic peak. Fox and Harris’s drums are particularly menacing here, rising in tandem with a swell of sustained notes, ominous peals and harsh tones. After a moment of near-silence, they unleash a cacophony so abrasive and pummelling it’s almost ecstatic.

But when A U R O R A isn’t kicking you in the gut and throat, it’s breathing down your neck. Sounds are ugly, compressed and intensely manipulated. The resulting atmosphere is dense and airless, with real-world signifiers largely absent – although the insect-like whine on ‘Sola Fide’ and a groan-like wind raising dust on ‘Diphenyl Oxalate’ hint at the surrounding environment. At the lower end of A U R O R A’s huge dynamic range, the unsettling, beatless track ‘The Teeth Behind Kisses’ is teeming with activity just beneath the surface, while the hot pulses of noise in ‘Flex’ grow louder as they gather pace, climax and then taper into dread quiet, their effect like being subjected to a sped-up slideshow of horrifying images.

Frost’s brand of menace has always been intricate and complex, but where on By The Throat and Theory Of Machines he would counter harsh noise with softening ambient and post-rock touches, A U R O R A feels more purely cathartic, though never one-dimensional or static. Instead, it’s more in keeping with an environment that Frost describes as “in a constant flux of destruction and re-creation”. If his aim was to give musical form to the eastern DRC’s “unnerving beauty and unflinching horror”, then A U R O R A is a dazzling success.