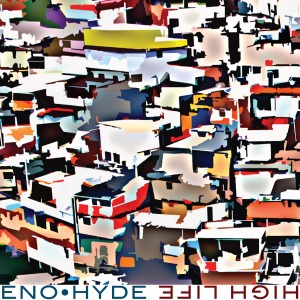 High Life is Karl Hyde and Brian Eno’s second album together in only a couple of months. That it was recorded and produced in just five days almost immediately after their first LP, Someday World, would seem to suggest a throwaway quality to the project you might not expect from such a high-profile collaboration. As such, High Life is something of a pleasant surprise. Where Someday World was a turgid album best consigned to the bin of Eno’s lesser works, to say nothing of Hyde’s, on High Life the two veterans travel into more interesting territory.

This isn’t the first time Eno has drawn heavily on West African popular music; that dates back to the ’80s with albums such as My Life in the Bush of Ghosts with David Byrne and Talking Heads’ Remain In Light, which he produced. The influence of West African music is present on the Someday World single ‘Daddy’s Car’, too, but on High Life it takes centre stage. The album title may be far too on the nose, but there’s an elegance to Eno and Hyde’s incorporation of highlife motifs into their minimalistic design that’s largely missing on their bloated collaborative debut.

Perhaps because it was completed in such a brief time, High Life is more compact and seems better edited than Someday World, its shorter tracklisting and limited vocabulary working in its favour even if its actual length is about the same as the first album. Hyde’s guitar opens the album on ‘Return’, with a pair of twanged chords dominating its nine-minute run. Eno and Hyde’s vocals and harmonies are a subtle complement to the driving guitar lines, but the towering crescendo, arpeggios and wordless coos occasionally make for an atmosphere that veers dangerously close to Eno’s stadium rock productions.

The instrumental ‘DBF’ is a highlight, its jittery funk groove just about to outstay its welcome before a wailing drone joins it, along with a helping of distortion that makes its abrupt finish after the sonic pile-up all the more jarring. ‘Time To Waste It’ seems to obey its title by taking a good five minutes for the best part, a heavily processed passage that’s all chunky synths and flatulent squall, to join the slightly bland reggae groove and reverb-laden vocals. High Life might be improved were this track and the jumbled grab-bag ‘Moulded Life’ taken away, but the emotive, beatless closer ‘Cells and Bells’ more than makes up for any low points with a lattice of ethereal drones, delicate thrums and spectral vocals that’s quite unlike anything else on the album.

Thanks to the live recording and processing, even the lesser tracks possess a spontaneous quality that’s as enjoyable as Someday World is stilted. On paper, High Life may seem like a coda to that album, and you’d be forgiven for not wanting to go near it on those grounds alone, but it surpasses its predecessor in almost every way. It does occasionally miss the mark, but that there are any hits to speak of at all shows that Eno and Hyde have a good deal more to offer than the uninspiring gruel of their debut.