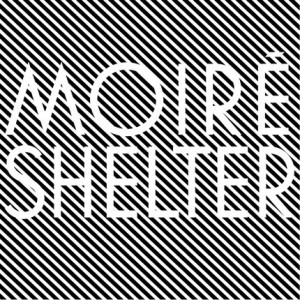 Moiré’s Shelter opens with a rising clatter. The moment when the bassline and loping kick join the thrum is a neat microcosm for both the album and the producer’s name: a first pattern onto which a second seems superimposed, creating a whole in a constant state of flux. Claps and stabs on ‘Attitude’ lag, while a skeletal, gloomy bassline anchors everything deep without adding much by way of a groove. As elements flutter in and out of the mix, it becomes increasingly apparent that concern for the dance floor is peripheral to Moiré’s introspective take on club music.

In that sense, it owes a small but definite debt to the nebulous dance-not-dance music of Actress et al; but where that was an obvious touch point for earlier Moiré singles, the similarities are far less pronounced on Shelter.  Moiré doesn’t search for perfect beats as much as he allows them to wander in and out of his tunes, so grooves are as apt to slip away just as suddenly as they appear. This is oversimplifying things a bit, but Moiré himself says that he would have certain synths on for many hours and record everything, or “just jam and get involved in the physicality of playing music on synths”. As such, Shelter has a spontaneous feel often lacking in a genre beholden to the grid, with fragmented beats that seem to breathe, shift and slip around rather than propelling forwards.

There are more explicitly club-oriented tracks, constructed according not to the logic of build and breakdown, but multiple instances of subtle tension and release in the confluence and divergence of their parts. ‘No Gravity’ is particularly well executed in this respect, its title realised in the thin vapour of its tail end, while there are hints of Terrence Dixon in the shimmering vocal snippets and tentative elastic bounce of ‘Stars’. ‘Dali House’ taps into the spoken word house tradition without feeling hackneyed, Moiré’s lithe, gritty bassline an ideal counterpoint to the breathiness of Bones’ sleazy, pitched down vocal. Another vocal track, ‘Rings’, is less successful, and one of the few moments on Shelter when all-out jamming seems to win out against delicate restraint.

By and large, though, Moiré counters spontaneity with poise. The dense but unflashy centrepiece ‘Elite / Hands On’, gets going at its own unhurried pace, and just at the point the lurching percussion and bassline are about to coalesce into a slow groove, Moiré lets everything trail off into a mass of half-baked samples. It’s a false ending: there’s a gorgeous breakdown so late in coming it seems suspended in mid-air, and ‘Elite / Hands On’ is reborn as a whirling dance tune, with all the energy and momentum that typifies Detroit techno. For all Moiré’s tendency to splinter and refract techno, he can also nail a groove.

The closer ‘Mr Figure’ is a case in point, with pretty melodic figures that percolate through an electronic haze and claggy claps echoing in airless space. Yet it’s only in the final few seconds that Moiré lets the deep bassline he’s been teasing for the whole track come to the front, unembellished, and it’s all the more satisfying for the brief spell it spends there. It’s a nice illustration of how Moiré pokes holes in the fabric of techno, bound to its framework only insofar as he delights in taking it down from the inside.