“Wu-Tang meets the Happy Mondays”: the Levelz crew raise it up for Manchester 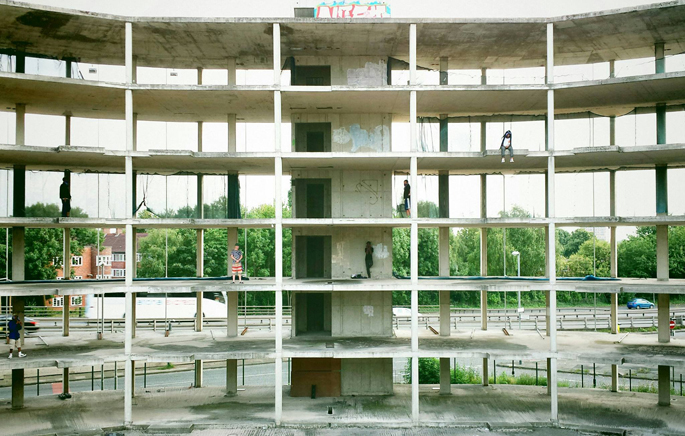 If London is the nervous system of modern British music, the hectic place where everything seems to happen, then Manchester is its heart, where the beat pulses steadily.

Without Manchester’s contributions to music, the past three decades wouldn’t be the same. From indie rock to dance music, Manchester has never been afraid to mix it up and do things its own way.

For eight years, local promoter and DJ Rich Reason has been running the Hit & Run club night in town every Monday. One of the many characters who spice up Manchester’s nightlife, Rich has begun to shift his focus towards building something more substantial over the past year, driven by a desire to move forward and learn from lessons accumulated after more than a decade promoting. The result is Levelz, a loose-knit group of MCs, DJs and producers with the potential to evolve into one of the most exciting creative forces to emerge from Manchester in recent years.

“What draws us together is a place and shared history, and I think there’s something to be said about that,” Rich tells me by way of introducing the project. Jonny Dub, one of the city’s leading DJs and another driving force behind Levelz, calls it “a natural thing, the result of years of working together on little projects here and there. It seemed obvious to put it all together.” The precursor to Levelz is Estate Recordings, a local hip-hop label that began over ten years ago and is home to some of the city’s well established rappers such as Broke N’ English and Skittles. The latter is an urban poet who carries on the traditions of Shaun Ryder and John Cooper Clarke, and is one of the group’s most arresting lyricists. Another incentive for Rich to kickstart the project was a desire to reverse the way Manchester is seen from the outside. Using The Warehouse Project as an example, he explains that while “they’ve always brought the best of the world to Manchester, I’m interested in taking the best of Manchester to the world.”

“The industry in this country is London-centric, so when you’re on the outside it forces you to look in.”

At its core, and it’s a big core, Levelz is made up of 14 members representing a wide range of Manchester’s musical inclinations as well as generations of fiercely independent creatives – the oldest is in his forties, the youngest are still in their teens. The main producers and musicians are Biome, Bricks, Chimpo, Dub Phizix and Metrodome, with lyrics handled by Black Josh, Chunky, Fox, Skittles, Sparkz, T-Man and Truthos Mufasa; Jonny and Rich complete the crew as DJs. Roles in Levelz aren’t clear-cut however; due to the inherent versatility that comes with such a large gathering of like minded friends, they’re interchangeable. It’s not uncommon for the lyricists to pitch into the music or for the producers to grab the mic or step behind the turntables.

Aside from Estate Recordings and Hit & Run, members of Levelz are also connected with the Hoya:Hoya and Swing Ting club nights, groups like Riot Jazz and The Mouse Outfit, and the Swamp 81 and Exit Records labels. Affiliates include budding producers Werkha and Walton alongside Manchester godfather Zed Bias.

The result of such diversity is that the group’s music isn’t clear-cut either. From hip-hop to grime and dubstep, drum & bass to house and jazz, there’s a little bit of everything floating in the mix. For Jonny, co-founder of Hoya:Hoya, it all comes down to the city’s penchant for cross-pollination: “It’s part of what makes this city. There’s a diversity and synergy in the music.” Chunky, who lends lyrics and productions to Hoya:Hoya, Swamp 81 and Riot Jazz, sees musical diversity as his default mindset. “I’m already cursed like that. I’ve got this awareness of ‘you can’t put this in a genre.’ I write without thinking of where it fits.” Fox, elder statesman of the group with the heart of a teenager, takes it back to life’s inherent cycles. “I can’t say I’ve seen this level of energy in Manchester in a while. The industry in this country is London-centric, so when you’re on the outside it forces you to look in. Right now I think Manchester is not trying to be anything, not trying to fit into anyone’s expectations. Man got an absolute love of each other and what we do, and that comes through in the music and on stage.”

When I was first approached by one of the group’s PR representatives, they made a passing mention of Wu-Tang in describing the collective. When I asked Rich he said “Wu-Tang meets The Happy Mondays” in reference to one of Manchester’s best-known groups, who also weren’t afraid to mix up styles. Comparisons only go so far, yet the joking analogy helps situate where Levelz sit in today’s crowded musical landscape: to the side, coming at you when you least expect it. They have street smarts, they’re a little crazy and they know what they want out of this. 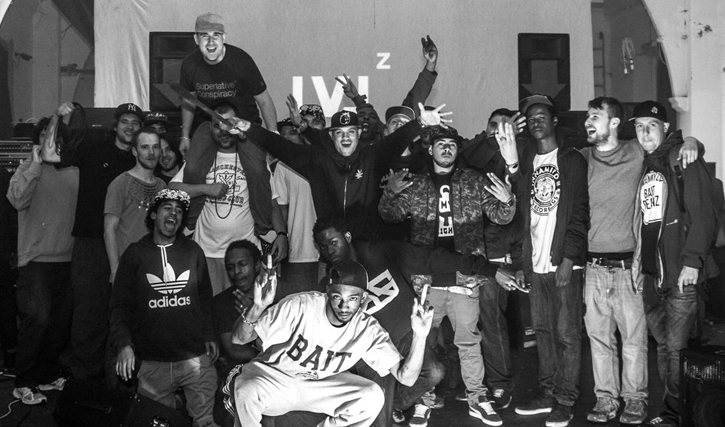 “Mancunians take the piss. You never quite know where the humour ends and honesty starts.”

During our conversation Rich makes multiple references to Factory Records as an inspiration. The legendary Mancunian label gave the world The Haçienda and The Happy Mondays among others, though it’s their approach to branding that Rich is keen to reboot and emulate. Everything Levelz does comes with a catalogue number, something Factory pioneered by cataloguing not only releases but also artwork and objects. “Everything we do of significance will have its own number. What I liked about Factory’s approach is that it was challenging and said something about the nature of art.”

After just over a year of solidifying the collective and introducing themselves to audiences in Manchester and London, where they’ve held two Rinse FM sessions, Levelz officially announced their arrival with a video in December 2014, titled LVL07 [above]. The track is taken from their first full-length release, a mixtape that showcases the group’s musical breadth; it will be available in April and act as “an introduction to the characters that make up Levelz.”

The music on this debut release was largely written during a week-long retreat to a mansion in Wales this past year. The group set up five rotating studios and spent their time writing, an exercise that left all the members I spoke to enthusiastic and energised. “It was amazing,” Chimpo said. “It’s definitely the peak of the project for me so far in a way. It was the most creative environment I’ve ever been in.” Fox jokes that if you throw a mansion into the mix you’re bound to always get good music, before pointing out that leaving their surroundings allowed the group to focus. Chunky describes their creative process as “very communal in its approach. A James Brown community.” Beyond the music, the trip was also key to consolidating the collective. Rich, as the man in charge of herding the creative kittens that make up Levelz, hopes that they can repeat the exercise on a yearly basis. If the results of this first excursion are anything to go by, it could well prove to be Levelz’s ace in the hole.

The group’s energy and goodwill is infectious, much like their music, but I couldn’t help wonder how the individual careers of its members balance out against the needs of the group. While confident, Rich seems conscious of the potential for issues to arise. On the one hand he’s hoping that by allowing everyone to be invested in the project, both creatively and financially, it will allow for future growth. On the other hand he’s realistic about each member also needing to work at their existing careers, some of which are further along than others. “It’s not the only commitment anyone has. And that’s fine, but I’m interested to see how the reception is and if that makes it easier to build up the group in turn.”

One benefit that’s already come from this situation is increased appreciation and collaboration between various members. Black Josh, the group’s youngest MC, wasn’t well known by some of the older members at first. Through a lot of hard work – both on his own and within Levelz – he’s proven that he can hold it down just as well as the more seasoned pros. “It’s not one of these crews where you got loads of mates but some of them aren’t very good,” Skittles explains. “We are all friends but we all have our own careers, our own thing going. You can’t take away our solo careers from what Levelz is.” After all, strength does sometimes lie in numbers. “A collective like this is a relationship, and like any relationship you have to be prepared to have a bit of give and take,” Jonny tells me. “Some people might be further along than others but when we come together as a unit, we’re all on the same page.” 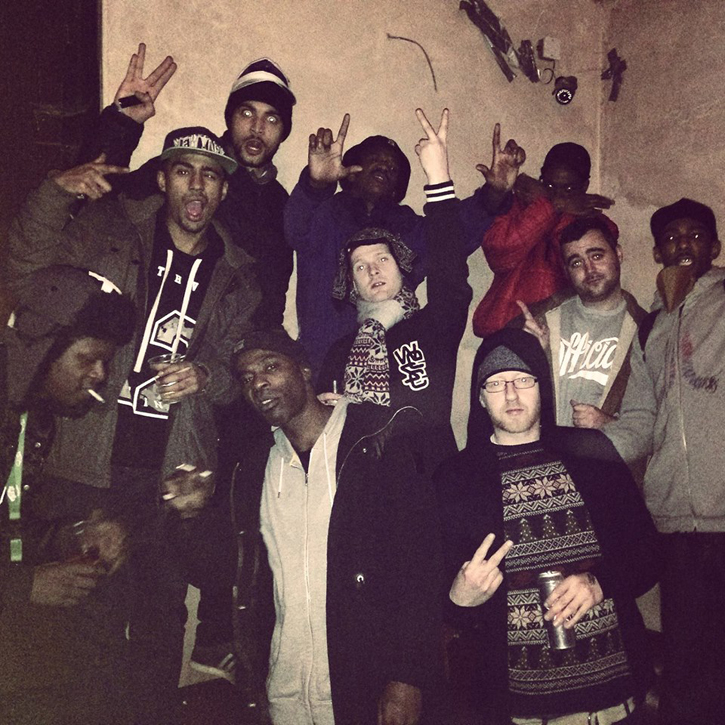 “Whatever happens we’re proud of the music.”

An essential part of what Manchester has contributed to British music is a good dose of humour and self-deprecation. It’s something that runs deep in so much of what comes out of the city creatively. It’s also part and parcel of day-to-day life up north, and Levelz are no exception. During their most recent Rinse FM session they brought their own adverts and jingles, parodying scenes and clichés. It’s what underpins Chimpo’s hilarious rhyming style and part of what has made Dub Phizix and Strategy household names within drum’n’bass. Mancunians take the piss, and to most outsiders the way they do it to each other can sometimes be unsettling. You never quite know where the humour ends and honesty starts. “There’s a lot of this ability to laugh at yourself,” Fox says. “That comes through quite strongly and I think is a big part of the energy we give out.”

Chunky offers one of the better explanations as to where this ease for self-deprecation comes from. “Manchester has never been the kinda city to just stand up and be like, ‘oh look, I’ve got the sickest clothes or trainers.’ People here had to fight. You can best see it in the different ethnic groups that move in every few years. Every time one group arrives they get a bit of stick. We, the Zimbabweans, got it. You don’t know if it’s racism, but you grow some backbone, take some and give it back. Before you know it you’re part of the tapestry that is Manchester. If you can take a big of grazing you’ll be all right. That’s just what Manchester is man. It’s about not being the boss in a way.”

The honesty that the Levelz gang display makes for a refreshing change from the standard underground approach that espouses seriousness and hyperbole by default. Chimpo is a good case in point, having found success in the past year by simply dropping any pretence at expectations. “I’ve reached a point where I can be myself and it can all fit around me. Not me fitting around anything else. You never make your best work catering to other people’s expectations or boxes.” Jonny echoes this feeling. “It’s about being genuine and people respond to that. And if not, it don’t really matter.”

The strength of Levelz is the community that birthed them, a city that unlike London is small enough to always have space to welcome someone in and make them a part of daily life. “If you don’t crack into any particular community in London, it’s a very lonely place,” Chunky admits. “We don’t have that problem in Manchester.” Ultimately, whether or not Levelz achieve their ambitions is no longer up to them, as Rich concludes. “Whatever happens we’re proud of the music. It’s not up to us past a certain point – it’s up to the public.”