The City Was Not Invited: International Mystery Fest

Matt Mondanile and Spencer Clark’s international experimental music festival featured musicians from across the globe, but spoke directly to the spirit and potential of Los Angeles.

Jewels Catch One is like a lot of venues in Los Angeles. From the corner you can view a selection of mini-malls in alternate directions while sampling heady fumes from cars rushing down Pico Blvd’s four lanes. A parking lot rests to the side with prices set to gouge, but how else are you supposed to get around in this city? And did you really think you were going to find street parking? There’s an ancient sign which gives the impression that whatever audience this club was originally intended for has moved on. They have. It was once famous, the first large gay disco in the US to welcome the black community. That changed. 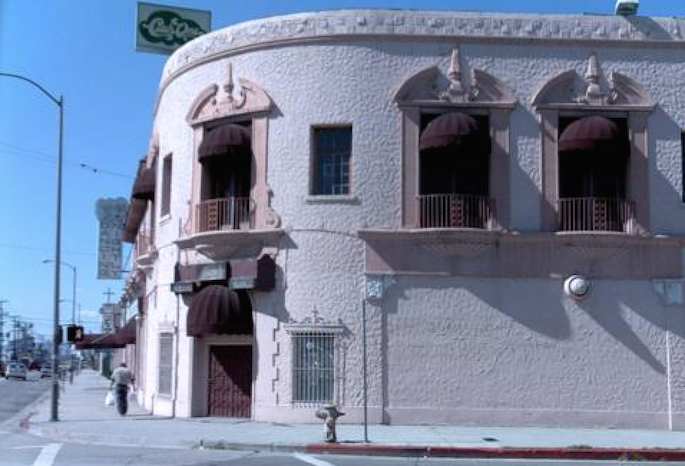 “After 41 years, there’s no reason to stay if the kids are not interested,” said original owner Jewel Thais-Williams last year. Like the city itself, this club has seen better days. Of course, escape is the gift provided by clubs all over, but sometimes it feels just a little tougher to keep Los Angeles from leaking through the adobe walls.

“It was a unique situation.”
Matt Mondanile

It takes something special. Fortunately Matt Mondanile (Ducktails, Real Estate) and Spencer Clark (who with James Ferraro makes up the beloved duo Skaters) were in the mood for special when they took on the challenge of booking a festival that would bring a globe-spanning lineup of far-flung experimental artists together on one stage, for one night. “Festival” doesn’t even fit here; it feels too impersonal. Rather, the International Mystery Festival had the warmth and energy of a big reunion of people who don’t get to see each other enough. Friends and family only; the city was not invited.

From its inception, International Mystery came from a place of love and affection. A week before the festival took place Clark got married in California, which meant a lot of very good musicians were flying in from Europe. That was when he and Mondanile had the idea to throw together a show the week after. It’s a rare treat to see some of these artists in the U.S., and to see this many in one night is almost unheard of. They’re friends Clark and Mondanile made playing in Europe, and many of them reside in Finland and Belgium, where Clark lives for the time being.

“I’m moving to Australia soon,” he tells me shortly after an immersive performance of his new project Pinhead In Fantasia, a project three years in the making inspired by a nightmare he had about Hellraiser II. “I don’t really live anywhere,” he adds, and it doesn’t feel dramatic, wistful or strange; it’s simply a fact. 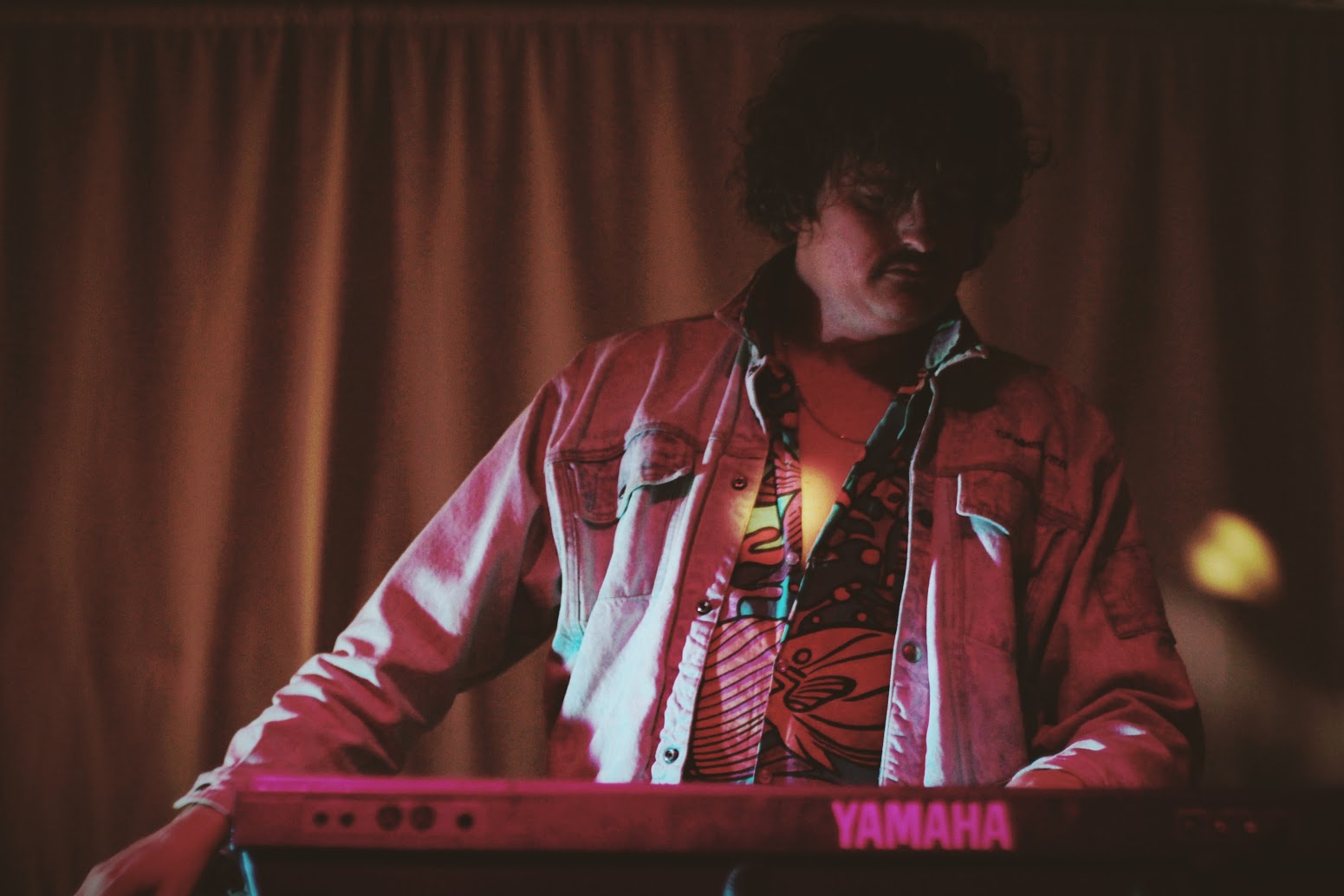 One important thing both artists express is how hard it is for European musicians to perform in the US. Tours must be planned much further in advance and are constantly threatened by the looming possibility of a visa rejection.

“It was a unique situation,” Mondanile said. “It’s hard to do this in America, but it’s easy to go over there and play shows. People are so gracious, so we wanted to do the same.”

The sets move with a laidback ease. Bands joke with friends in the audience, set times are more like set suggestions, and it’s no big deal if something goes haywire. Fairly early into a set by Rene Hell (aka Jeff Witscher), his apocalyptic glitches are flowing strong – and then the music shifts to a dramatic, sudden silence. For the first time Witscher looks up and speaks.

His computer has broken.

After some good laughs (then more good laughs when we’re informed the computer is going to take a bit to reboot) everyone settles back in and the set goes off beautifully. Warmly funny moments like that were only made more enjoyable when put up against the intensity and power of every performance, and the stunning curation that went into sequencing the sets. 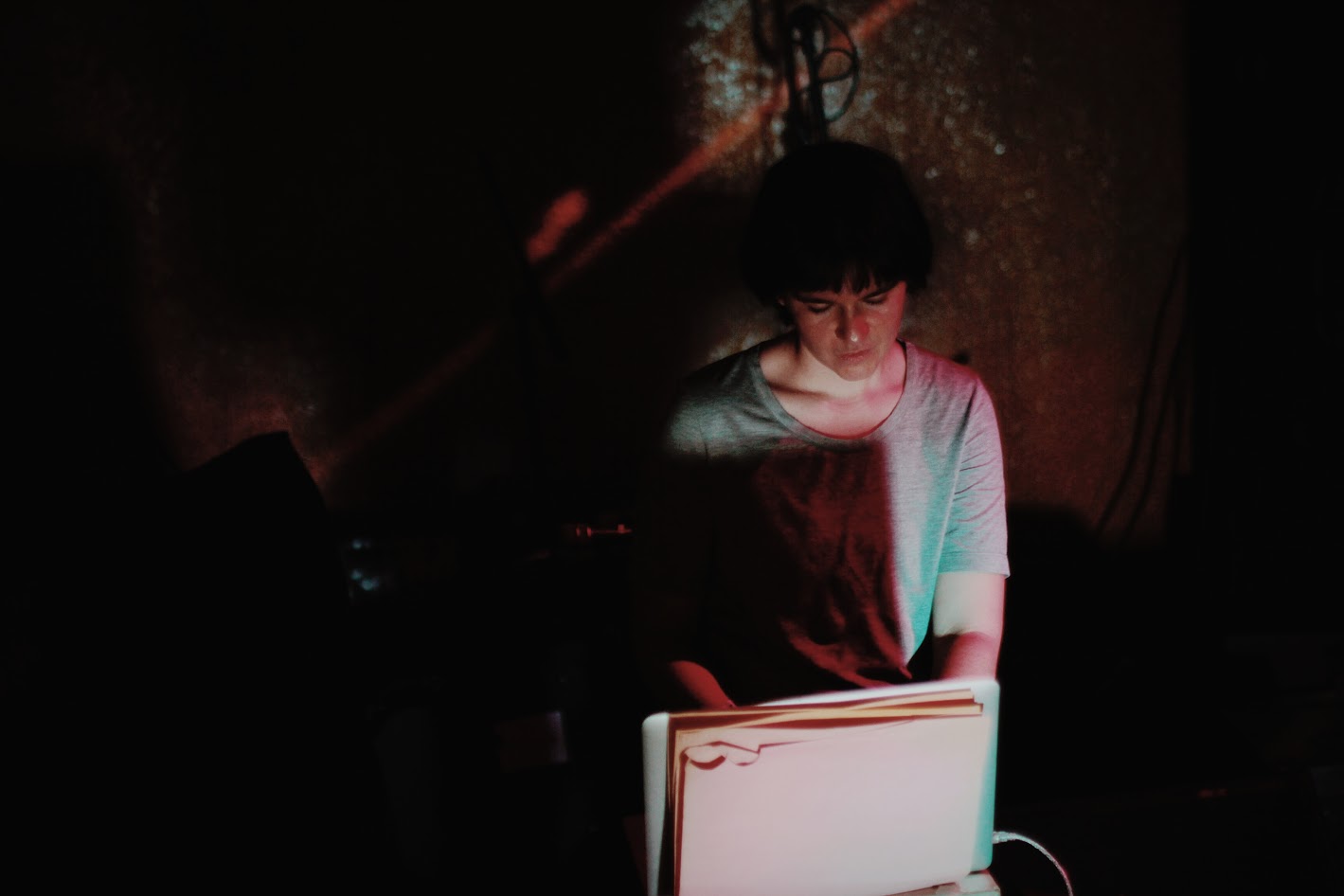 The show began with a back-to-back pairing of two extremely intimate performances — one electric, one acoustic. Madalyn Merkey’s set opened like a match burning in reverse. The music, from her computer and microphone, floated in like faint smoke before thickening and eventually igniting. Meanwhile, Kayla Cohen performed as Itasca with an acoustic guitar and a voice as cooling as the plummeting temperatures in the desert air outside. Itasca was one of the only artists performing who lives in LA, and her music evokes the natural beauty of the area.

Do you know the feeling when you’ve been in a sauna and then you go into a pool? That’s the best way to describe what the transition from Floris Van Hoof to Dolphins Into The Future did to your ears. First, Hoof’s caustic set was paired with a visual collage of subliminally fast shots of hard candy and wire projected on a sheet loosely tied behind him. Hoof was followed immediately by Dolphins, a duo of Lieven Martens Moana on all things aural and Wietske Van Gils on all things visual.

A Dolphins Into The Future set is a remarkable thing, a testament to how some acts can’t only be experienced on record and a frustrating reminder of how rare a performance by them is in this country. Moana’s foggy, nautical soundscapes feel captured rather than conjured, and when given the opportunity to fill a room, they transform it. Van Gils, meanwhile, incorporates visual effects projecting the postcard-like vistas that typically adorn their albums and gradually distorts them with filters, marbles, and water. It creates an effect beyond anything I’d experienced from their records before, something nearly synesthetic. 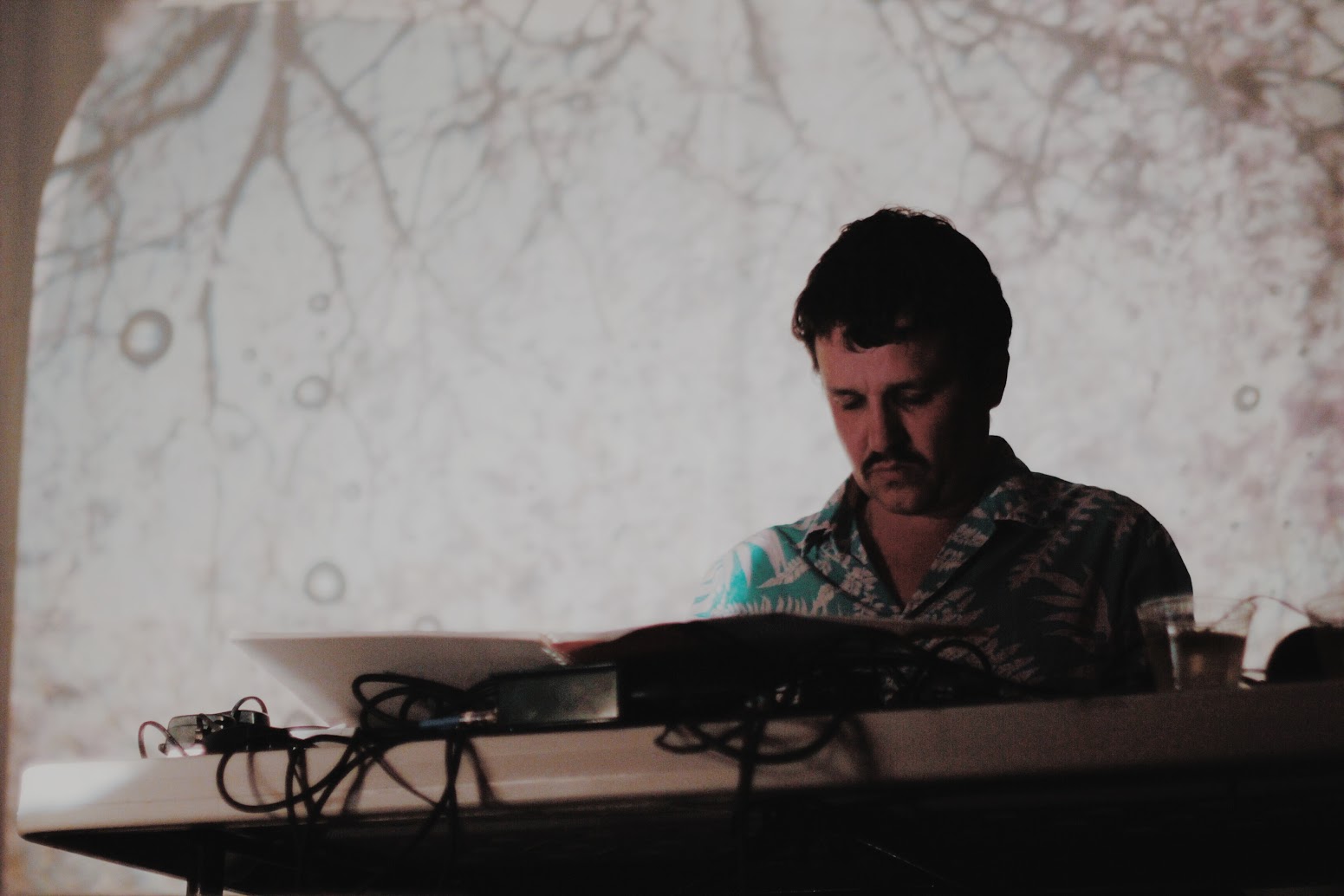 [Lieven Martens Moana of Dolphins Into The Future]

“So, Los Angeles, huh. I’ve been here before, it’s alright,” Moana deadpanned before earnestly dedicating the performance to Spencer and his wife as a wedding gift. It’s an understandable sentiment — what’s transpired tonight is not the norm, not even close. Though this show would have been something of a miracle anywhere, it feels significant to be happening in this old club a few miles south of Hollywood.

“I wouldn’t have believed that would ever happen if you told me 3 years ago that I’d like LA.”
Kayla Cohen

“There’s a lot of space and opportunities, but there’s not a lot of gigs,” Mondanile says after Clark relieved him of DJ duties between sets. “It’s spread out and not a lot of bands come out here.”

Still, he thinks of it as a place that could turn into something. Mondanile lives here, though Real Estate, the band’s he’s best known for, is still always associated with the Brooklyn scene or their Jersey roots.

After Itasca’s set so vividly captured the environment, Kayla Cohen talked to me about her own move from Brooklyn three years prior.

“I wouldn’t have believed that would ever happen if you told me three years ago that I’d like LA,” she says, as we sit on a back patio in the warm January air. Back when Cohen moved out here there were even fewer shows going on, a jarring transition from the density of New York’s all-you-can-eat buffet. The vastness of LA is comfortable, but it makes it harder for scenes to bind the way they do in smaller or denser cities.

After the cross-country drive that brought her here, Cohen says it was hard to adjust, and that’s felt on her recent album Unmoored By The Wind. It’s a beautiful, melancholic record, one she tells me was very influenced by a time and place. But things have changed. 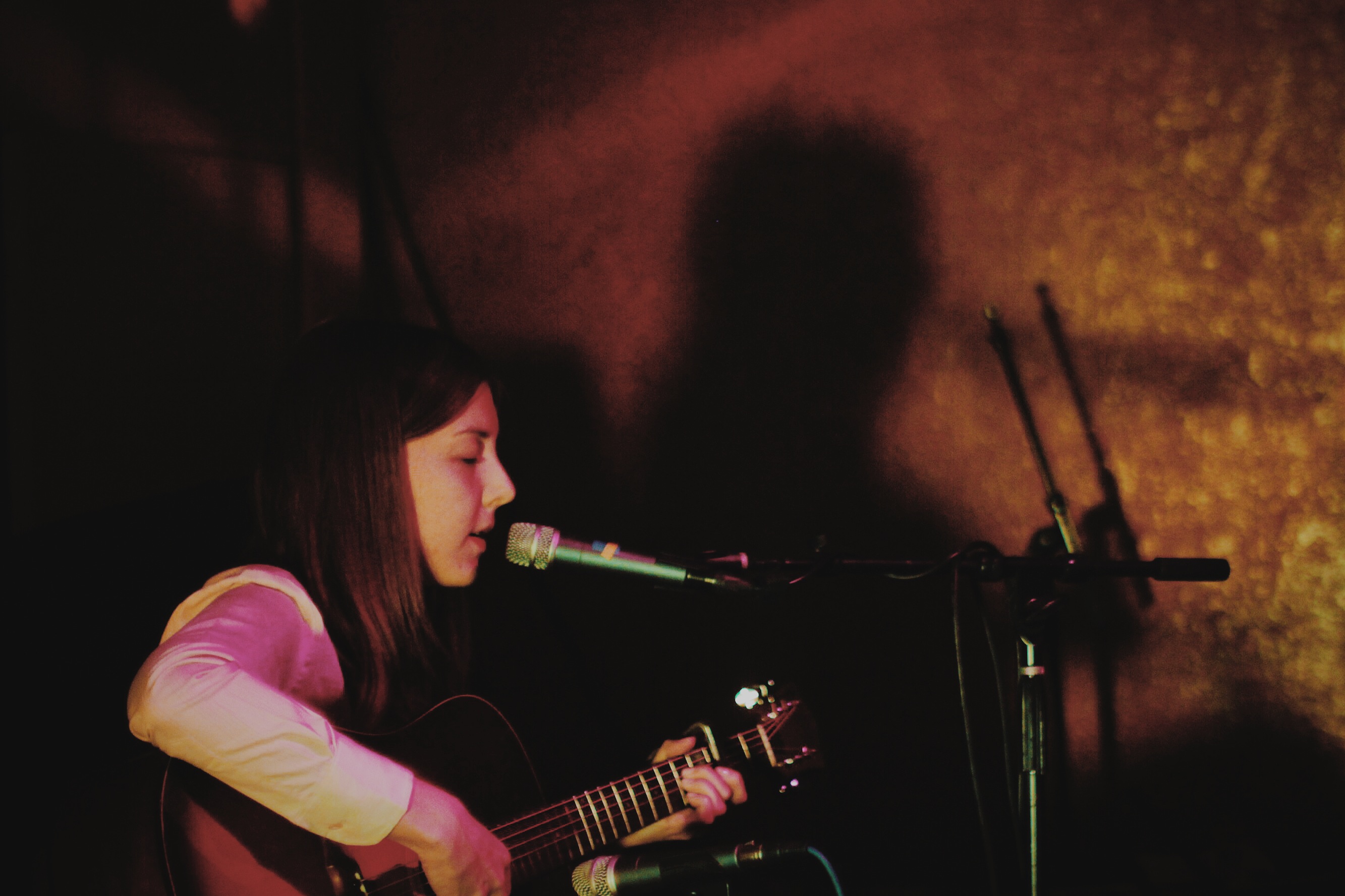 “Now I’m sort of getting over that feeling, so I feel like the next album will be a little more light,” she says, adding that these days it feels like there are more old friends of hers moving to the city every day.

It’s a quality that’s not new to Los Angeles. Perhaps more than any other city in America it has been defined by spikes in potential for growth, whether by gold, oil, or celluloid. More important than any history though, LA has cheap housing – something Manhattan lost long ago, most of Brooklyn lost recently, and areas of Queens are losing currently. In other words, it could be fertile ground.

“I mean LA still sucks,” Cohen says. “Traffic is terrible, smog is terrible, the sun is insane, the film industry is awful.” There’s a contrast like any place, but one side is starting to win out. 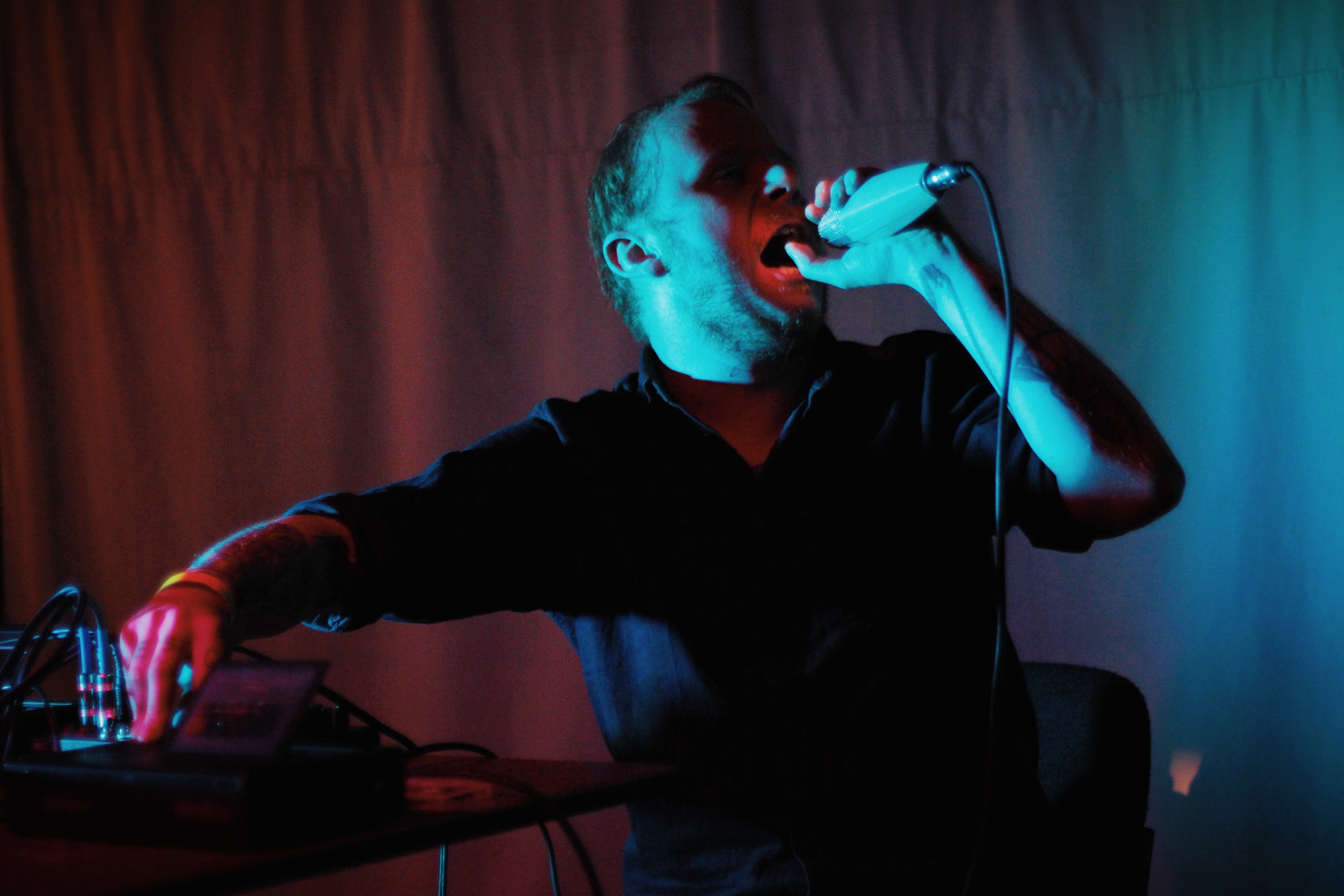 Those nagging questions of “what could happen here?” are only growing, yet they’re checked at the door on the walk back into the pink neon glow of the club. Dennis Tyfus has begun yodeling on stage to equal amounts of bewilderment and enjoyment. The show continues that way late into the night and the feeling stays. The feeling that if something this intimate, this special, can occur here, then it will again. Even if they only last a night, more escapes can be made.

Tags: Dolphins Into The FutureDucktailsItascaRene Hell