Native Instruments’ new controller could be a game-changer for bedroom musicians wanting the affordability of the original Maschine with the added ability to sequence rhythms and build tracks. But how does it fare close up? Scott Wilson gets to grips with a tool that doesn’t reinvent the wheel but does offer new ways to perform.

Over the past decade, the market has been saturated with grid-based controllers for music-making. The reason for their popularity is obvious: they’ve lowered the barrier for entry. They make it easier for those without musical training to feel like they’re playing an instrument, whether that’s at home or on stage. The Novation Launchpad, Ableton Push – each has offered its own take on a format popularised by the boutique Monome company in 2006.

Now, there’s another option to consider: Native Instruments’ Maschine Jam. The Berlin company has arrived very late to the grid controller arena, choosing instead to develop the original Maschine. It’s is one of the best modern tools for beat-making, combining a software interface with a hardware controller that allows you to create drum loops and even play synth plug-ins. However, putting those loops and basslines together with Maschine is not its strong point. 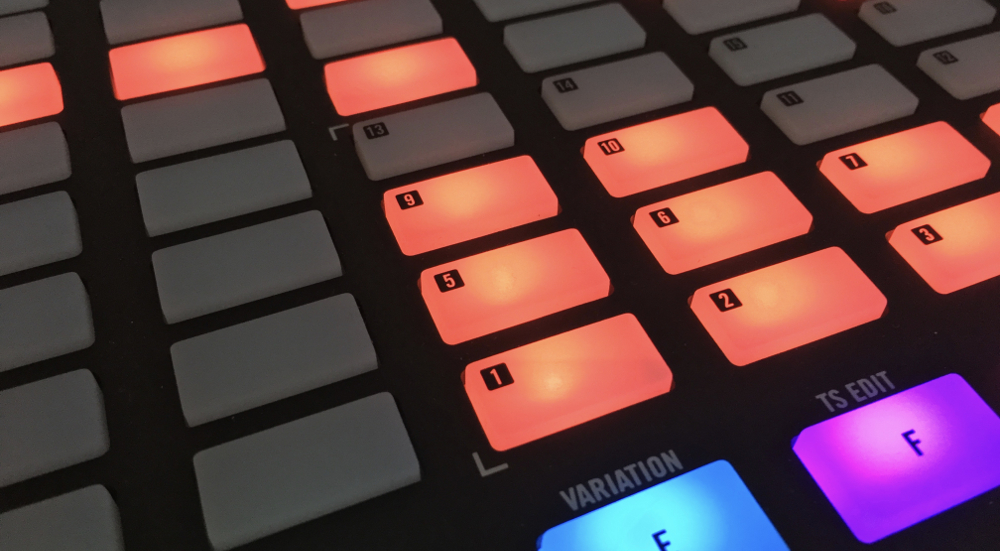 Enter Maschine Jam, which NI has designed not as a upgrade or replacement for Maschine, but as both as a standalone controller for quickly building tracks and a companion for the original controller. It comes with the same Maschine software, drum samples and soft synths the original does, but it’s geared towards laying down drum beats, basslines and melodies fast and putting them all together.

NI isn’t reinventing the wheel here, but it has managed to add one element that feels like a small innovation: eight touch strips. These can be used with effects and synths, pushing the Jam closer to the category of performance instrument – not just a device for blindly activating pre-prepared drum loops.

There’s no getting around it: Maschine Jam looks a lot like the Ableton Push. Ableton didn’t invent the 8×8 matrix, but NI’s decision to make the pads rectangular rather than square, and dispense with the square layout of the Launchpad seems like more than just a coincidence. However, the experience of using the Jam’s grid is quite different from the majority of similar controllers.

The main distinction between the Jam and its competitors is that the grid isn’t really intended for drumming out rhythms with expression. While the pads of the Launchpad Pro and Ableton Push will detect how hard you’re hitting them, the Jam’s pads are clicky. In certain modes the bottom right section will turn into an area for drumming out rhythms, but they won’t detect force.

If you want to drum out rhythms MPC-style, the Jam is probably not for you. But if you’re one of the many people who likes to create a rhythm by placing drums with a mouse, it could be a game-changer. The grid’s main function is as a simple step sequencer; enter step mode, hit play and a cursor will scroll through the loop, allowing you to place drums, snares and more by pressing the buttons on and off.

As well as drums, there’s a piano roll mode for sequencing melodies. The grid also has a keyboard mode that allows you to set a scale, meaning you’ll never hit a bad note. The Jam is lightning fast for sketching out tracks once you’ve figured out how to switch between the different modes; in fact, what feels most striking about how it works is that it feels very much like a dedicated groovebox. There’s no screen, but you don’t notice it when you’re building tracks because the feedback from the coloured LEDs is so clear. In fact, the lack of screen works well because you’re less likely to spend time changing kick drums – something I’ve done way too often on the original Maschine. 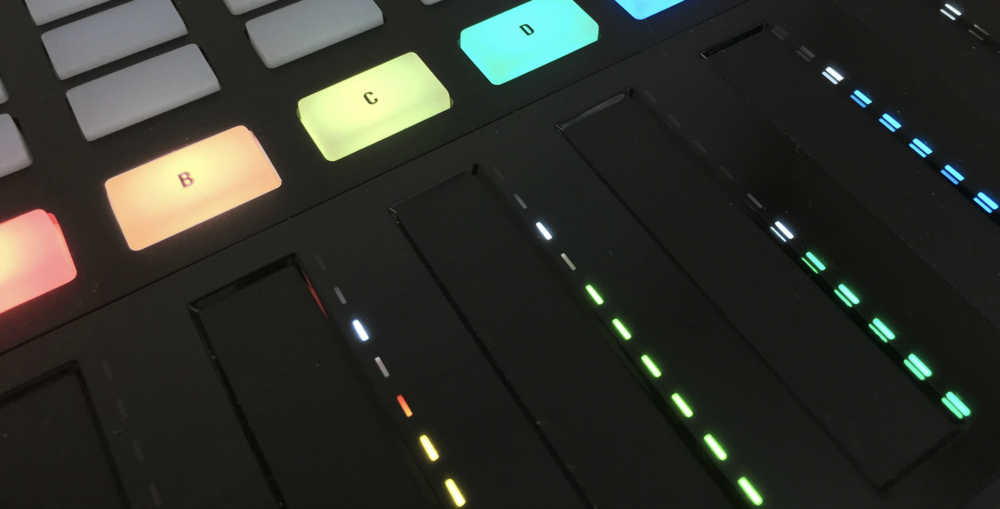 Touch strips are everywhere right now, but I’m still not convinced by them. On Roland’s JP-06 module for example, they take the place of pitch and modulation wheels and are consistently frustrating – mainly because they sometimes the parameters jump suddenly if your finger isn’t right in the middle when you pitch up or down. So far, only the strip on the Ableton Push has really sold me, because it’s bigger than any other and the added travel makes it easier to be more precise. However, the Maschine Jam have something other touch strips don’t: a sense of fun.

The eight strips – referred to by NI as “Smart Strips” – fulfil the kind of standard roles you’d expect from what is usually a replacement for physical faders: volume level control, panning, tone and swing. But it’s their use as controls for effects that makes them stand out. Each fader can be loaded with one of eight performance effects; for example, filter, ring modulator and flanger. There’s also the ubiquitous stutter effect for building intensity, but your tolerance for this kind of sound will vary depending on how much you like drops.

The most interesting aspect of the strips is that they can also be used to control plug-in instruments. Like the keyboard mode on the sequencer, they can be locked to a key so there’s no chance of hitting a wrong note. While you can tap out melodies on the fly, they’re not for accurate, keyboard-style control. Instead, they behave a little like a virtual string instrument, rolling up and down the scale as your finger moves along the strip. With the right plug-ins it’s a bit like having a sampler at your disposal, and lets you add melodic flourishes you can’t with a standard keyboard. It’s the primary feature that would have me using the Jam over a Push or a Launchpad Pro, and could be the killer app that attracts producers and live performers to the controller.

If you’re familiar with the original Maschine, you’ll notice another major difference: a lack of knobs. While the Jam’s sibling has plenty of them for changing different values and scrolling through kits and samples, this new model has just one. If there’s a weak link to the Jam, it’s this. With no screen built into the hardware, you’re forced to browse sounds and effects by a process of turning and clicking the encoder and looking at the computer screen. Compared to the original Maschine’s fast and easy browsing, it can be as cumbersome as turning a combination lock. In NI’s defence, once you’ve loaded the sounds all your focus is on building your track, but if you don’t have the original Maschine next to the Jam, you may find yourself just using the mouse and screen.

While the Maschine Jam is geared towards quickly building ideas, it’s also intended as a tool for building whole tracks and playing them live. In this respect, it’s pretty successful. It’s easy to launch whole scenes and individual clips, though anyone weaned on Ableton Live’s way of doing things will need to get to grips with the way Maschine software’s slightly different approach. However, if you’re the kind of person that likes to tweak synths while you’re playing a set then it may not offer enough hands-on control – another reason why pairing it with an original model might work best for producers who like to have plug-ins loaded into the Maschine software.

One of the Jam’s most unique features is a hold mode that freezes tracks so you can play around with it without modifying your original work. It functions a little like the slip mode in a set of CDJs: press the hold button and it takes a snapshot of the current scene that you can can add effects to to create build-ups. Once you’ve finished, press lock again and it goes back to the original loop. It’s the kind of feature that has the potential to be abused in a live setting, but in the studio it’s a useful way of trying out different ideas quickly without having to use the undo function.

Maschine Jam isn’t a revolutionary piece of hardware. It does the same things as a lot of other similar controllers, with the touch strips the only thing that offers a truly fresh approach. But if you already own the original Maschine and love the software, there’s little reason not to consider it: the integration is great, and the touch strips are more than just a gimmick. It’s beginners that are going to get the most out of Maschine Jam though: for just over £300/$400, you get the software and hardware you need to start building tracks without a mouse, and a generous package of professional software including drums and synths – far less than you’d pay for Ableton Live and Push.