If you want proof of the popularity of Novation’s Launchpad, just visit YouTube.

There, among heartfelt acoustic covers of rock ballads, is a whole sub-category of videos devoted to performing cover versions using the grid-based MIDI controller. One video – a Launchpad cover of Martin Garrix’s ‘Animals’ – has racked up a staggering 8 million views. These videos sum up why the Launchpad is such a popular device for producers: no matter your ability level, it can make you look like a star without much effort. However, they also highlight the Launchpad’s fundamental weakness: when you draw back the curtain, what you’ve got is a device designed for triggering clips in Ableton. Necessary, but not particularly exciting. 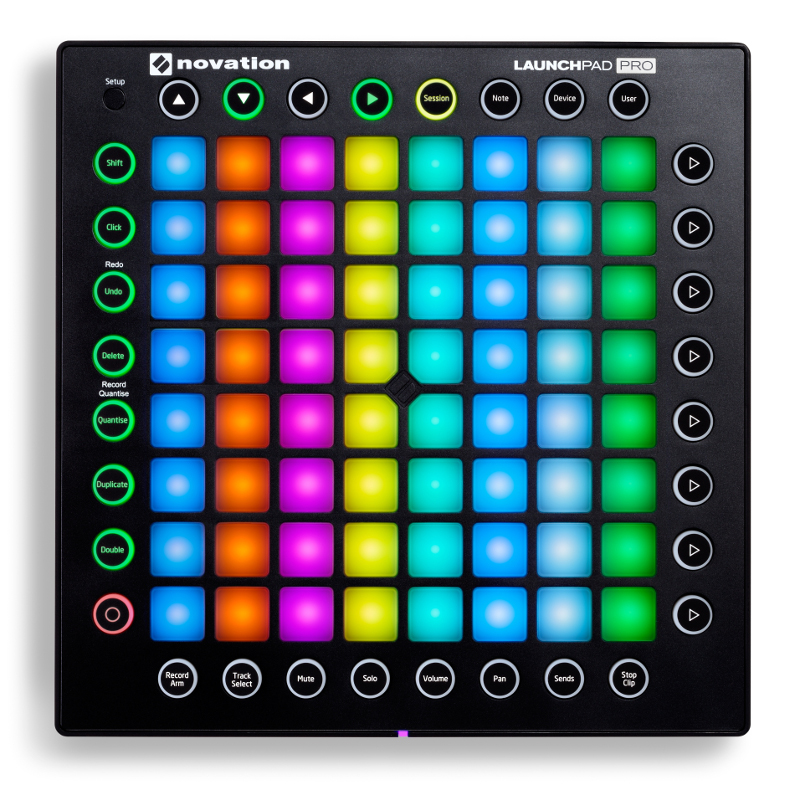 There have been several revamps to the Launchpad since it was released in 2009, but the new Launchpad Pro is the first that truly feels like a genuine update. It’s long overdue; in the past six years MIDI controllers have grown more innovative while mobile apps have reduced the need to own a physical controller at all. There’s also Ableton’s Push, a controller that does everything the original Launchpad does and a whole lot more – admittedly at a much higher price.

Novation has been making some of the best controller keyboards in the business for well over a decade now, but the Launchpad Pro feels like the most solid, desirable controller it’s made to date. The matt black finish is reminiscent of the Ableton Push, and the rubberised orange base (complete with grid indentations) gives the whole thing a reassuring sturdiness the original Launchpad never had. The supplied MIDI and USB cables come in the same orange – a minor detail, but one that doesn’t go unnoticed, especially when some manufacturers won’t give you free cables at all. Finally, there’s the grid of 64 pads itself. Unlike the original Launchpad they’re velocity sensitive and feel as good as the pads on the Ableton Push, giving the impression of a rock-solid controller you’d happily throw in a bag and not have to worry about getting damaged.

On the surface the Launchpad Pro still functions as it used to. When you open a set in Ableton Live and select the “session” function, the controller will show the clips on screen, with a red box in Ableton showing the area covered by the grid. You can move your position using the arrow buttons, start a clip by pressing the corresponding pad and launch a whole scene with the play buttons running down the right hand side. On the Pro however, everything is a lot more user-friendly, and much quicker to navigate.

For example, the new RGB buttons light up with the exact colour of the clip in Ableton so you can better keep track of what you’re looking at. There are also dedicated buttons on the left for deleting and duplicating clips, quantisation and undoing actions. The most useful additions are the dedicated buttons for vital Live functions like record arm, track select, mute, solo, volume, pan and sends and stop clip. The Pro overlays these functions over the bottom row of pads, meaning you still have control over the set while performing these actions. It might sound minor, but it’s a dramatic improvement to have these functions so easily accessible. Probably my favourite hidden function is “Fader Glide” – instead of dragging your fingers to change the levels, you hit a pad hard to make it change fast, or lightly for a slower curve. It’s an elegant solution given the lack of proper faders.

The most notable change is in the Pro’s performance features. The controller features a button that takes you into “Note Mode”, and like the Ableton Push, lets you use the controller as an instrument. Load a drum rack into Ableton and you can tap out a beat, with all the expression that the velocity-sensitive pads afford. The pads aren’t quite as sensitive as some people might like; you can’t just brush a pad to create a sound – but the sensitivity can be modified in settings if you want your drums to be louder without having to hit the pads harder.

As well as drums, this mode can be used to play melodies and chords. The root note of a scale will be shown in the bottom left hand corner, and can be moved as necessary, but unfortunately it only uses a standard chromatic scale – unlike the Push which offers more options in this regard. However, the inclusion of aftertouch – the sensitivity of which can also be modified in settings – makes the Pro a better and more compact device for playing melodies than a lot of smaller MIDI keyboards.

These functions are all expected from a MIDI controller in some form or another, and the Pro does them all well – especially considering it’s half the price of the Ableton Push. Where the Launchpad Pro stands out however is in its ability to connect to other gear via MIDI without the need for a computer. With much of today’s cheaper hardware lacking features like velocity-sensitive drum pads or even keyboards, there’s an obvious reason for buying something as compact and portable as the Launchpad Pro as an all-in-one option, and it succeeds to a point. You can chain several devices together and switch between MIDI channels to control each, but with no built-in step sequencer, the Pro’s functionality in this context is quite limited. As it stands it’s definitely more of a software controller than a hardware brain like the Beatstep Pro, and I’m probably not the only one that hopes that can be rectified in a future update.

Despite the advances in MIDI controllers over the past few years there will always be a place for a grid-based device, and the Launchpad Pro does it better than most. It’s solid, a pleasure to use and very affordable. However, there are a few functions that feel a little underdeveloped – most notably the note mode and the hardware MIDI mode. Thankfully, it’s also one of the most open commercial controllers you can buy thanks to Novation’s open source firmware. Stagecraft Software for example is already working on an app that expands the Pro’s note mode with added scales, keys and modes.

The open nature of the Launchpad Pro makes it difficult to criticise its limitations. Even if Novation don’t fix the issues I have with the device, it’s likely that someone else will – it’s a blank canvas that will probably inspire everything from Max For Live devices to offbeat sequencers, and it’s the primary advantage it has over the Ableton Push. While the Launchpad Pro will probably still inspire lots of EDM covers on YouTube, we can expect it to inspire a whole lot of creativity too.