How Ableton’s new Push makes production accessible to all

When Ableton CEO Gerhard Behles announced the new Push controller during the keynote of Ableton’s Loop summit on November 1, he received a standing ovation.

It wasn’t for the product itself – though the excitement from some people was palpable – but for the trade-in programme he had just announced. To get a discount on the new model you simply send Ableton your old unit, which instead of being dismantled for parts is donated to music education initiatives around the world for children. It’s the kind of philanthropy you might expect from Google, but not necessarily from the music side of the tech industry.

Originally the idea of Ableton’s communications director Chris Woods, the key moment for Behles in signing off on the program was when he saw classroom teaching with Push in Los Angeles. “It just totally blew my mind. If you give this kind of gear to a guy of my generation it’s intense – you really have to get your head around the concepts to make music with it. But when you put Push in front of 13-year-olds they have no problem, because they navigate technology in a completely different way.” 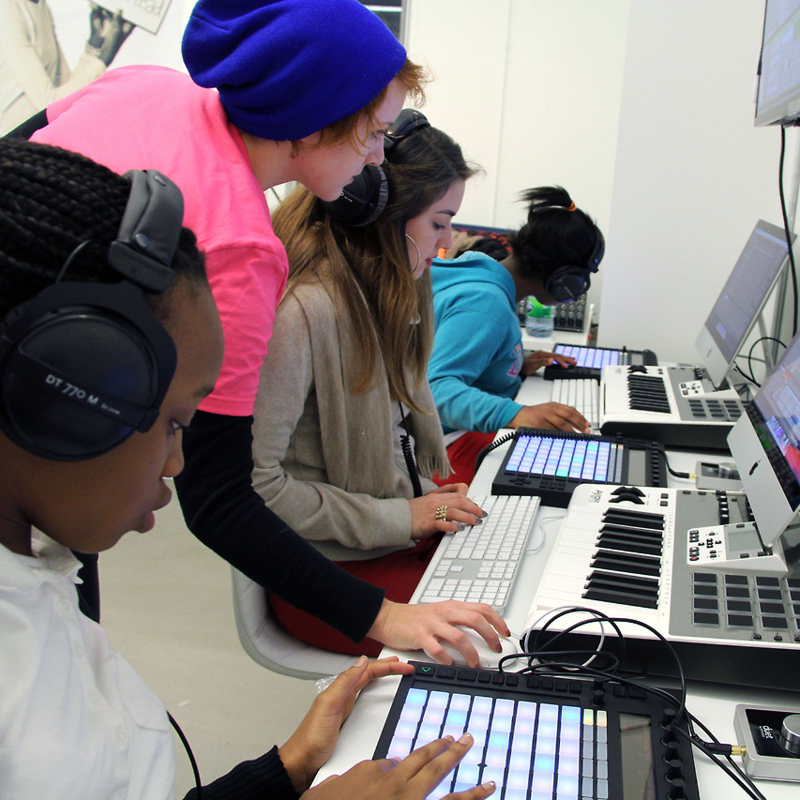 “When you put Push in front of 13-year-olds they have no problem.”
Gerhard Behles

If you’re familiar with the ethos Ableton has been developing over the past 16 years, it’s not all that surprising. Live’s in-built tutorials are are some of the easiest to follow you’ll find in any music software, and more recently Ableton published a book called 74 Creative Strategies for Electronic Music Producers. Educating and making music more accessible to all has been driving what Ableton does for years, and the Push controller, introduced in 2012, took that idea a step further. With the Push trade-in programme, initiatives like Erin Barra’s Beatz By Girlz in New York will now be able to help children without the means to get into production.

When a product is so easy to learn that it can be used by a child, how do you go about improving it? This was the challenge for Jesse Terry and the Push development team, who have spent the past three years working on the second iteration. The answer was to hone in the thing that was missing from the original Push: sampling. “We have a vision of Push as a product for music creation,” says Terry. “A large part of that is making melodies, harmonies and beats, but another big part that was missing was working with samples. We love the SP-1200, the MPC, the SP-505 and Maschine, but we wanted to see how we could make something unique and faster for the Ableton style of workflow.”

When Ableton released the original Push, one of the key innovations was the ability to easily play scales in key – no matter what your ability, playing a wrong note was impossible. The new Simpler instrument included with Live 9.5 makes sampling just as foolproof, using Ableton’s time stretching technology so that samples can be played in any key at the same speed. “The original Simpler device was powerful but unless you really understood what it could do it was quite hard to grasp,” believes Dylan Wood, whose sound team is responsible for the way Live sounds. “We’ve redone the way it feels to use – the motivation is what I guess you’d call ‘creative sampling’.”

“The motivation is what I guess you’d call ‘creative sampling’.”
Dylan Wood

Watching the new Push in action it’s clear that Ableton have succeeded in this aim of making sampling more creative. Working with samples on Push is as easy it was to create music in a Mixolydian scale using the original model – you’ll still need to record the audio onto your computer, but Ableton as easy to do as if you were using a traditional MPC. “It’s not so much that we want to make making music easier, I think it’s more that we don’t want to put things in people’s way,” Wood says. “I’m a guitar player, so if I want to sit down and play my guitar there’s very little between me and just playing. I don’t have to turn it on, I don’t have to set it up, it’s easy. It’s not easy to learn the guitar, but there’s nothing between me and playing it when I know how.”

Ableton has achieved all this in part by taking complete ownership of Push, whose first version was developed in partnership with Akai, and as Terry explains, “totally re-engineering” everything under the hood. As well as sampling, the new Push also adds support for VSTs and Audio Units, bringing it into line with Native Instruments’ Maschine, as well as adding subtle tweaks to the layout – some of which were inspired by the community. “On our forum there were a lot of users who put together their own ordering of how parameters on effects and instruments work and communally mapped them,” Terry explains. “We took some ideas from there and reworked them so now all your effects and instruments just work out of the box with individual indications of what kind of sine wave or square wave you’re using with a little icon. It makes it a lot more fun to work with synthesizers and stuff like that.”

The community is very important to Ableton, who utilise trusted artists like Nick Hook to help design the functionality and alpha test the device. “The way I’ve been describing it is like when your dad got a new car and it came with power steering and a new cupholder,” Hook says. “They’ve taken away all the parts that I think held me back. It’s not a full relearning, that’s important – certain buttons are in new places and they’ve streamlined it, but if you spend three hours learning the new functions it’s a better experience.” For Hook, the new Push has reduced the amount of time spent looking at the computer screen, which has increased his output in the six weeks he’s spent with it so far. “What’s inspiring to me is that the music I love wasn’t made with a screen, whether it’s James Brown or Led Zeppelin.” 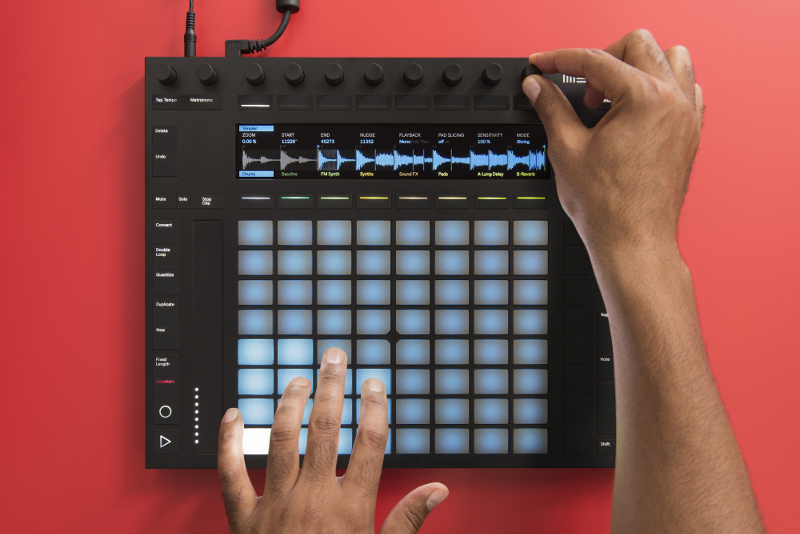 “What’s inspiring to me is that the music I love wasn’t made with a screen.”
Nick Hook

That aim of taking the user away from the computer was something that Ableton wanted to achieve with the original Push, but Terry felt needed some work because of the limited screen. “One of the main things we noted from people with the first Push is that the browsing was a major reason why people were turning back to the computer, so we really wanted to improve that.” As well as letting you view, slice and tweak waveforms on the Push itself, the full colour screen shows peak and RMS levels. It brings feedback within easy reach of a producer jamming with live instruments without the need to be right by the desk or computer.

Not everyone will agree with Ableton’s description of Push as an “instrument”, and some will be concerned that seeding these devices into education programmes is not solely for philanthropic reasons. Behles however doesn’t see the Push and traditional instruments as mutually exclusive. “Many [young people] discover traditional instruments through sampling. Maybe the sample of the music is the flute – then they want to know more about the flute, and maybe that leads to an interest in the more traditional instruments,” he suggests.

“I think with Push you give people a head start. You give them something that in the shortest time possible gives them a voice in making their own music. And I think once that fascination, satisfaction and empowerment is there they are more ready to go deep and learn the violin or whatever.” Push might have been developed with adult producers in mind, but if Ableton’s program is a success, the next generation of beatmakers could be starting out much younger.

The new Push is available now. More information on the Push trade-in programme can be found at the Ableton website.