Features I by Cameron Cook, Caroline Whiteley, Jesse Bernard and Michelle Lhooq I 15.05.18

Of the great DJ Lilocox’s new track ‘Vozes Ricas’, Singles Club contributor Cameron Cook says, “Everybody came to this party ready to shed their colonial shackles and dance the night away.” But this wasn’t the case for every song on the chopping block this week. Speaking about her stacked new collab ‘Girls’, Rita Ora said she hoped it would become a “bisexual anthem” inspired by Katy Perry’s ‘I Kissed a Girl’ which has, of course, been considered homophobic for the last decade.

Ora caught some fire from some women artists who publicly identify as queer, including Kehlani who said, “Hate to be that guy but there were many awkward slurs, quotes, and moments that were like ‘Word? Word’… Every artist on the song is fantastic and very much loved and supported by me, by all of us. But this isn’t about talent. It’s about choice. and don’t make this personal: There. Were. Harmful. Lyrics.” See what our panelists have to say.

Caroline Whiteley: Problematic collaboration alert! I love a gay anthem but I need to side here with Hayley Kiyoko, who said “I don’t need to drink wine to kiss girls; I’ve loved women my entire life.” These kind of lyrics, she says, “fuel the male gaze while marginalizing the idea of women loving other women.” (3)

Cameron Cook: Rita Ora’s never-ending bid for relevance is basically its own meme at this point, and while I will seriously give literally any female pop star at least a modicum of my attention, this track seems like a weird piggy-back off of Charli’s smash hit ‘Boys’ from last year. It’s catchy, it’s fine, but Katy Perry has already done this and to be completely honest, it was kind of hokey 10 years ago. Giving this an extra point for Cardi rapping “I don’t gotta introduce myself,” and then introducing herself (“Cardi!”). (6.5)

Jesse Bernard: Up until now, I’d been largely unaware of Rita Ora’s music but ‘Girls’ was a pleasant surprise. Having Cardi B, Charli XCX and Bebe Rexha on the song also helped make it a nice listen, but with a queer-positive message it becomes so much more than another chart filler. (8)

Michelle Lhooq: While I theoretically stan for women singing about their love for kush and kissing girls, this feels more like straights clawing for cool queer cred a la the fake bisexual Katy Perry, than the woke anthem they wanted it to be. The only thing it’ll motivate women to do is buy more panties at Topshop, where it will undoubtably be on heavy rotation. (3)

Michelle Lhooq: Starts out promising with a slow-burning build, but never quite delivers. It peters out into a by-the-numbers dancehall ballad that lacks the unforgettable hooks and easy swag that make Popcaan hits like ‘Love Yuh Bad’ instant blunts-in-air moments at every party. (5)

Jesse Bernard: My ears perked up immediately when I first played this track, but I’m not sure if that’s because it sounds like all the dancehall every pop artist has been trying to mimic or because it’s actually good. (6)

Cameron Cook: The fact that 2018 has given us a collab album from Sting and Shaggy (don’t Google it) had really put me in a funk, but thank god this Popcaan track came out of nowhere to reinvigorate my faith in dancehall. “Body So Good” is what he does best: light, easy pop-reggae that’s fresh like a poolside Red Stripe. (7)

Caroline Whiteley: Nothing but love and respect for Popcaan but this sounds like the background music for an informercial selling a body-slimming product. (4.5)

RP Boo – ‘Back From the Future’

Michelle Lhooq: Once again, RP Boo proves why he’s footwork’s first (and arguably greatest) innovator — an O.G. killer with no filler. ‘Back From the Future’ sounds both like classic Boo and unlike anything else out there: hypnotic loops of his wails filling the shifting spaces between skittering, stripped-back snares and atmospheric swirls of synths. Like Boo himself, the track refuses to be pinned down. (8.5)

Jesse Bernard: The combination of the repetitive, distorted vocals over the slightly wonky beat in theory shouldn’t work but where RP Boo finds the magic is in the drum pattern, transforming the song into a comfortable headbanger. (8)

Cameron Cook: A full album of new, contemporary music from ghetto house pioneer RP Boo is a huge deal, and while this track didn’t necessarily blow me away, it did get me stoked to get my footwork on when the record drops. RP’s use of drum machines is so wild — kicks and snares rumbling and snapping all over the place. Again, masterful, but waiting for more… (7)

Caroline Whiteley: This is an absolute belter. In classic RP Boo style, ‘Back From The Future’ is one of those tracks that starts off as one thing and then goes through an insane musical metamorphosis. The drop happens within the first half minute, and then it goes off into a hook that never quite reaches a conclusion. The anticipation that the track builds up in the spaces in between is somehow still oh so satisfying. (9)

Caroline Whiteley: This one caught me from the first beat. While the melody doesn’t change much, the infectious percussion pattern and fervent rhythm is enough to keep the energy up. (8)

Cameron Cook: The percussion on this track is completely incredible. New world, old world, everybody came to this party ready to shed their colonial shackles and dance the night away. There’s something almost spiritual to it, to be honest. Not super familiar with Lilocox but I’ll be keeping my ears peeled. (7.5)

Jesse Bernard: While DJ Lilocox has done away with his need to use a bassline, the expansive use of percussion on Vozes Ricas (rich voices) adds a depth and vibrancy that a traditional bassline would give. Each drum used has a specific purpose and it’s this level of thought that makes this so refreshingly good to hear. (9)

Michelle Lhooq: In a way that reminds me of a solid techno roller, Lilocox’ simple, repetitive drum pattern pushes you to pay attention to gradual textural shifts and buried details as the track blooms into a lush percussive field. Not quite transcendent, but still masterful. (7.5) 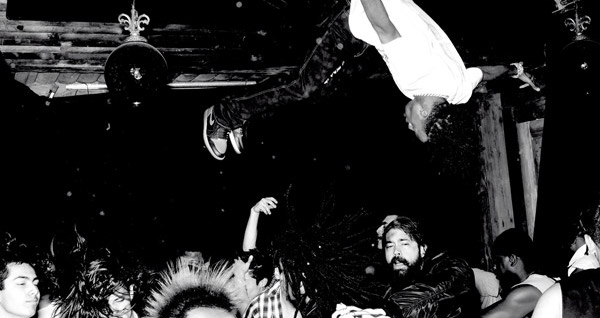 Cameron Cook: I think we’re approaching a point where hip-hop is just going to go fully post-verbal, and when it does, I’d rather it go Cardi-B-tongue-pop-okurrrrr than Playboi Carti repeating the same word for damn near five minutes. I rarely feel old, but Playboi is just one of those artists where I’m like, have a blast kids. Points to Nicki for the line “wife beater torn like Natalie Imbruglia.” (5)

Caroline Whiteley: There’s some cute wordplay on Playboi Carti’s part but the first half of the track almost put me to sleep until Nicki Minaj came in to save it. Once again she proves her ability not just to elevate any track she’s featured on but to entirely steal the show (here’s looking at you, ‘Monster’). (5)

Jesse Bernard: There’s little that’s inspiring about the latest single from Carti, not even a Nicki Minaj feature. After a minute or two, the beat begins to grate and you’re still wondering if the most exciting part of the song is yet to come. (3)

Michelle Lhooq: It’s already a delight to hear Carti rapping like he’s got a ball gag in his mouth over 80s synth arpeggios, but it’s Nicki’s bars—as many have pointed out—that steal the show. When she raps that she’s the “best feature out the Big Apple since FaceTime,” everyone felt that. Who cares if Apple’s actually based in California—even facts bow down to the queen. (7)

Caroline Whiteley is freelance writer based in Berlin. (@carowhiteley)