Over the next three weeks leading up to the 2020 edition of Lunchmeat, we’re exploring three key performances from the Prague festival’s 11-year history.

Back in 2017 Jlin and Berlin-based visual artist Theresa Baumgartner brought an intoxicating blend of intense stroboscopic sound and kinetic visuals to the basement of Veletržní Palác, a functionalist museum that doubles up as the spiritual home of Lunchmeat Festival.

Developing a pioneering taste for audiovisual art and performance for 11 years, the Prague-based festival stands out from other independent arts festivals due to an approach to curation that is at once carefully considered and refreshingly fearless. By programming exploratory AV performances next to boundary-breaking club acts, Lunchmeat effortlessly incorporates art, music and technology into a tirelessly progressive vision.

It is this space that the multi-sensory assault of Jlin and Theresa Baumgartner was unleashed to destructive effect, with unrelenting strobes and thick smoke combining in an environment as oppressive as Jlin’s productions. “We programmed the fixtures in such way that their motion is disrupted, breaking out of formation into a deconstructed array and back”, explains Baumgartner.

“The moving heads themselves look like they develop a life of their own and take part in the performance. Very intense strobing and blinding and heavy fog is an essential part of the performance echoing the intensity of Jlin’s production, forcing the crowd to close their eyes and be right there in the moment with only the music and your body.”

Lunchmeat Festival 2020 will take place from September 28 to October 3 in various venues across Prague and will include performances from Lyra Pramuk, Helena Hauff and SOPHIE. Tickets are available now.

Watch next: ZULI & Sam Wiehl join the dots between the Voynich manuscript and psychogenic amnesia with ‘Cipher’ 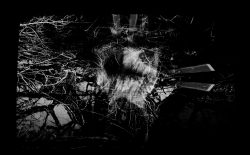