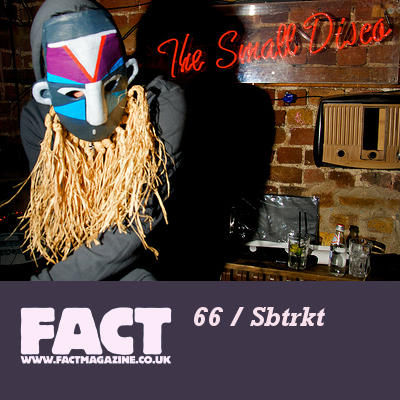 FACT mix 66 is by Sbtrkt, a masked London-based producer who’s impressed us this year with his remixes of Goldie, Peaches et al, and his original material – much of which has already been snapped up by labels like XL, Brainmath and Planet Mu.

He played a stonking set at our last Lock Tavern party alongside Ben UFO and Cooly G – one that blended house-fed dubstep from Ramadanman et al with the neo-garage of folk like Falty DL and a healthy amount of bootlegs and unashamed house anthems – and Sinden recently gave him his Fabric debut as part of his Get Familiar night. His FACT mix was done of Ableton with plenty of live editing and effects, and features Karizma, F, 2000 & One, Goldie, Little Dragon and more.

Turn the page for an interview with Sbtrkt…

Hey Sbtrkt – what’s your story? Where are you from? What’s the name about?

“I’m a musician living in London at the moment. Moved around a fair bit in the past. Sbtrkt is just a name I came up with to describe how I’d like to subtract myself from the music I create. Rather than get stuck in an explanation of what’s it’s about I’ll let it speak for itself!”

How did you get involved in music?

“Through my brother and cousins who were big into hip hop, house and rave in the early 90s. Had a big impact on my listening habits, and I learnt a lot about what was going on in club culture when I was about 10-11. Started buying vinyl round 13: stuff like X-Press 2, South Street Players, Todd Terry. Got that knowledge mainly thru reading magazines and listening to Kiss 100. Went to my first music festival, Tribal Gathering, in ’97; saw Roni Size, Daft Punk, MAW, and it changed my perspective on what I wanted to do in life! From that point on I was set on making electronic music.”

“That whole euphoric space and sound of that kind of event…I was listening to some of the Sonar recordings on Mary Anne Hobbs’ show and it reminds me of those moments: the buzz of hearing something fresh and exciting which transcends the space its played in. I caught the 2step bug in ’98, started buying endless white label 12″s and its influence has reigned heavy ever since.”

“I used to play instruments, piano mainly. Been using sequencers since I was about 15 – first on an Atari I found in a dusty basement school room, then many years on Cubase, then more recently the MAC daddy Logic. I did a bit of audio engineering before so learnt the basics of recording live sound too.”

“This mix was just a way of showing what kinda sound I’m about. I kinda split it 50/50 with my own material and other tracks I really rate. FaltyDL, Ramadanman, Sampha and Little Dragon are current artists I really look up to so had to fit them in somehow. I spent a lot of time working out the transitions in this mix and keeping it musical and moving without the songs dictating it – I didn’t wanna deviate tempos too much and stuck between the magic 130-140 mark.”

You’re (sort of) anonymous – have you been doing stuff under other guises we don’t know about?

“I work on a couple of other projects. I think with the amount of bullshit people promo about themselves on the net via myspace, facebook etc, whether you talk the truth or not, no one hears you above the next person. So I’d rather keep my head down and write more music than have to sell my story.”

How would you describe your tunes to the uninitiated?

“The dreaded question…I’d send them tracks and leave them too it. I’m too involved in it to describe it rationally!”

You make loads – what releases are on the horizon? And what ones are you most proud of?

“I try to complete tracks at least every other day. Just hearing other new music inspires me to write more. So far I’ve got releases planned on XL/Young Turks (‘Soundboy Shift’ b/w ‘Rundown’ – which Annie Mac has on a forthcoming compilation too), and there’ll be other releases through XL in the future. Then a 12″ in Sept on Brainmath records (‘Harmonics’/’Laika’). Also some 12″s on Planet Mu; most likely beginning of 2010 now. ‘Lovin You’ and ‘Atomic Peace’ are 2 tracks which should make the first one! And I’ve had some love from other highly noted labels who I was honoured to get positive feedback from. No news to report as yet though.”

“A few tracks I’ve worked on which I’ve yet to send out to djs are my definite faves. I’m waiting for these releases to get on their way before I drop some more stuff. Working on some collabs with vocalist/producer Sampha which are sounding good. I’m quite proud of tracks that other DJs have played, such as Sinden, Benji [B], Mary Anne Hobbs, Blackdown…it’s funny how hearing it in a radio context makes you feel like you’re hearing it for the first time!”

Which musicians inspire you – both current and old?

“I’m always listening to people songs hearing how they change melodies, drum patterns,the way they EQ, use compression, etc. There’s so much you can gain just through picking out the individual sounds in songs.

Old: Could be clever and write some digging list but im all about new music right now!”

Sbtrkt is playing at the Lock Tavern tonight as part of the Young Turks showcase with Jamie (The xx), Mount Kimbie and more. You can also catch him at Stealth in Nottingham on Saturday July 25.