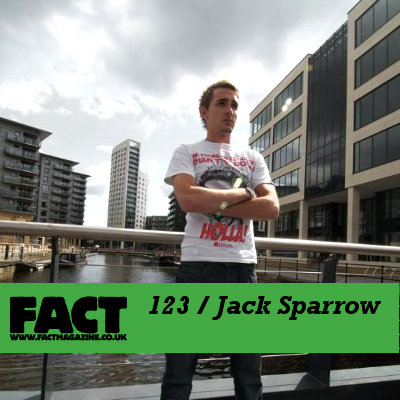 This Friday’s mix takes the form of a stunningly rhythmic session by Jack Sparrow.

Part of the Bristol [edit – he’s actually from Yorkshire. Duh FACT] dubstep sect, Jack Sparrow’s not released an awful amount, preferring to bide his time and release select singles on trusted labels like Earwax and Tectonic, the label owned by Bristol dubstep godfather Pinch. This year he releases his debut album for Tectonic, working (or at least thinking) title Circadian, and if it’s anything like this mix then it’s going to be special.

Shying away from obvious selections – though there is room for Breakage’s brilliant remix of DLX’s ‘Matter of Fact’ – FACT mix 123 tends to a rolling, percussive aesthetic, swinging from scattershot house to creeping minimal dubstep, and closes on Sparrow’s new single for Tectonic, ‘Terminal’.

Fans of 2562, dBridge, Roska, Pinch and everything in between, your time. For a full interview with Jack Sparrow where he spills the beans on his debut album and musical journey to date, turn to page two.

So you’ve got an album coming out on Tectonic, right? What stage is that at?

“Yes I am working on a 14 track project at the moment, it is taking shape quite well. It’ll be out this year at some point. A sampler will be released prior to that.

What can we expect from it compared to your past material?

“Well it will be an album, not just a collection of singles so people will hear a side to my music they haven’t before alongside some dance floor tracks. There’s a massive percussive feel to it but not all tracks are dubstep so it’s nice to be able to stretch my legs with an LP.”

Any guest appearances, vocal tracks, other surprises? And what sort of time is it expected out?

“I am working with a couple of vocalists at the moment who are very talented. As far as the music is concerned it will be just me which has been a mammoth task in all honesty, I must have rewrote the whole thing 3 times over.”

“It will be out this year at some point, I have no exact date at the moment. I’ve been thinking of Circadian from Circadian Rhythm for the title, which is quite personal to me.”

You’ve not put out a massive amount of singles – certainly less than most dubstep producers who put out an album. Do you consider yourself more of an album artist?

“This is very true. I didn’t really know what i was doing in the early days and then I met Pinch and he has been a mentor of sorts and taken me under the Tectonic wing with some great artists. So I feel quite lucky as he’s let me experiment and catch my breath. I write a lot of music but I don’t send much out really unless I am happy with it and it has been tried and tested in the clubs. Yes, I would say I am more of an album artist.”

“This mix is a selection of tracks that I rate highly, the selection wasn’t hard to pick as I’ve been playing most of them recently anyway. Anything that rolls along with big drums and bass is my thing.”

We don’t know a massive amount about you apart from your music – where did you grow up? What sort of early musical experiences did you have?

“I was born in Leeds spent some time here then moved to Cyprus, after that I came back to live a short while in London then back to Leeds again. My parents were the greatest influence on my music, they had cabinets full of tapes, CDs and vinyl – I went through most of it at my own pace over ten years. My dad gave me stuff to listen to from jazz to electro to acoustic to rock. The first bit of music I loved was Rene and Angela – I’ll Be Good 1985’…Top tune.”

When did you start making your own music? And who’s inspired your dance productions most over the years?

“I started in 2008 properly and that was after spending years going to Sub Dub, a club night in Leeds. I had been listening to dubstep for years before that and decided I wanted to have a go, I always admired people in loads of scenes from Mala to Richie Hawtin to Nightmares On Wax and then investigating deeper into those genres.

“I think what has worked for me is isolation and cutting the scene off from myself and just making what i want to make.”

Do you think you’ve found your own sound – like an aesthetic, or distinctive theme that keeps cropping up in your tracks? How would you describe your music to someone who’d never heard it?

“I think I am on the way to my own sound, in the scheme of things I am new to the whole thing so I am still experimenting with production and sounds. There is a massive carnival influence at the moment.”

What particular music are you into right now?

“On my iTunes most played today is…