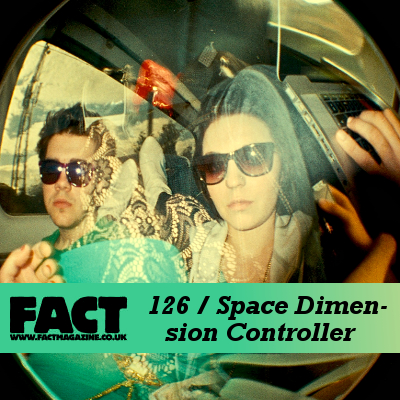 Today’s FACT mix is from a name that you’re going to be hearing a lot more of in 2010: Space Dimension Controller.

The alter ego of 19-year-old Belfast-dweller Jack Hamill, Space Dimension Controller has only released one single to date, ‘The Love Quadrant’, but it was one of the most distinctive and compelling debuts of 2009, earning a place in FACT’s Top 100 Tracks of that year. Inhabiting a wistful, pop-psychedelic but low-end-savvy world somewhere between house, electro and techno-funk, with vocals coming courtesy of Jack’s girlfriend Kat,  ‘The Love Quadrant’ marked the arrival of a serious and singular talent.

Since then we’ve had the pleasure of hearing several more SDC productions, and they’re all top-notch. Hamill puts real love and attention into chords and harmonic composition, and boy does it pay off: imagine Prince, James Stinson and Manuel Gottsching hitting the studio together and you’ll have some idea of how sumptuous and fantastical this music is.

Space Dimension Controller’s charms haven’t gone unnoticed; Kyle Hall (whose next 12″ is out on Hyperdub) loves his sound and the pair are collaborating on new material for the Detroit house prodigy’s Wild Oats label. SDC’s next release – the Journey To The Core of The Unknown Sphere EP –  is coming out via Rotterdam’s mighty Clone Records, and features a remix of the title track by Hall.

Jack is a participant in the 2010 Red Bull Music Academy and will be playing alongside Roska, DOOM, Katy B and many more for the A Taste of Sonar event at The Roundhouse on Saturday 6 March. Then, the following day, Sunday 7 March, there’s a chance to catch him at FACT’s free Lock Tavern party, where he’ll be warming up for Rustie, MJ Cole and Joy Orbison. Arrive early to catch the man in action.

Space Dimension Controller’s FACT Mix is an adventure and a half, and the perfect introduction to his bold aesthetic, boasting no less than six of his own productions, not to mention the aforementioned Kyle Hall remix. With both youthful insouciance and a very mature sense of selection and sequencing, SDC drops tracks from Round One (Basic Channel), Mike Dehnert, Model 500, Jimmy Edgar and Drexciya-related Der Zyklus, putting his own unique stamp on them through a litany of craftily deployed loop, delay and dub effects.

Dare we say it, it’s the most warm, original and insistently funky mix we’ve hosted so far this year. Download, listen, read the interview over the page and get wise to SDC before all the fools check in.

Hello there, SDC. Please introduce yourself for the benefit of the uninitiated…

“Well, i’m Jack Hamill, but the nickname of Jack Tiraquon seems to be catching on with a few people. I’m 19 years old, turning 20 next month though…I make music under the name Space Dimension Controller and its a sort of electro-funk-housey-techno thing.”

It’s a bit of a mouthful, the name. Where did it come from?

“Originally the whole SDC thing was a side project of mine when I was mainly making ambient type music, but I really got into it which was unexpected. The name comes from the first piece of hardware that I ever bought which is made by Technics. Its a short decay BBD delay type thing that I use every now and again on drums and stuff.”

Where are you from?

“I live in Belfast, Northern Ireland. I’m not sure how I could say this place impacts me musically, because the underground electronic scene here isn’t all that great. I suppose in a way that kind of inspires me because I’m doing something so different to the majority of local producers. It still annoys me every now and again when there aren’t any decent gigs to go to or play at though. I’m just not into minimal or typical club techno and a lot of the time that’s all you’ll get here. Lately dubstep is catching on, but i’m not into that either. Belfast is like five years behind everyone else.”

You’re not into dubstep, but you released [debut 12″]  ‘The Love Quadrant’ on Boxcutter’s label, right? How did you hook up with him?

“I’ve known Barry since I was 17. We met around 2007 when Mike Paradinas played here in Belfast. I had been annoying him for a while via e-mail, sending him all my crap ambient/IDM tracks that just sound like Aphex crapped them out. Only recently has he been into all this whole techno/funk stuff.”

Your SDC productions seems really detailed and considered – have you been making tracks for a while?

“I made my first track around NYE of 2006 in Reason 2.5 on my old eMac. Things have come a long way since then. Only up until about March of last year did I start really paying attention to detail. Tracks can take anywhere from three days to a month and a half to make.”

What would you say you aim for with your sound and production? What kind of music are you setting out to make?

“I like making really detailed, unique 4/4 music. I spend time on my chords, sometimes it can take me a few weeks to find chords that don’t sound familiar but still sound nice. Anyone can make a Detroit wannabe track with the same old fifth chords and it will still be loved, but that’s all over the place these days. Not to say I don’t like it, I just feel a bit guilty whenever I have a chord sequence in one of my tracks that sounds sort of familiar or part of a niche.

“My brain doesn’t let me get repetitive with my music either, which is a bit shitty if I want to make music for playing in clubs. I usually can’t let something repeat the same over after four bars. That’s the good thing about analog production too, because analog changes so much it really gives texture to my tracks and avoids them sounding boring and stale after a minute as is the case with a lot of club music. Thats just my opinion though.

“I like making music that has a broad range of appeal too. It’s sort of evident when I play gigs here in Belfast. I’ve been put on before Skream, Pendulum, Deadmau5 and all those kind of mainstream-ish guys. They are all totally different to what I produce or play in my DJ sets, but I still seem to appeal to the crowd that’s there for them. You do get the odd minimal techno head who will just be like ‘WHA? THIS IS MELTIN MY HEAD M8’ on forums and stuff, but I just find it funny! Belfast dance heads are very unforgiving and don’t really like to stray out of their comfort zone.”

So what did you grow up listening to? How did you find your way to what you’re into now?

“My first real love of music was when I was around 14 or 15 and I was just getting out of my heavy metal phase. I started by listening to Darkdancer by Les Rythmes Digitales which is up there as one of my favourite albums ever. I loved Discovery by Daft Punk from when it first came out and I was in first year of grammar school. The next big thing was Brian Eno and Aphex Twin a year or so later and then everything just followed on from there. For about two years the majority of music I would listen to was ambient music, so all I made was ambient music.

“Producers from the early days of my electronic explorations are the ones that provoke the most nostalgia. Like Aphex, Eno, Boards of Canada, Les Rythmes Digitales, Daft Punk. But more recently I’m really into Tyrone Brunson, The Other People Place and the whole Drexciya/Dopplereffekt family.”

Are there any contemporary producers that you’re particularly digging?

“I haven’t sat down and listened to music for a while because my laptop has all my music on it and it’s never hooked up to my monitors any more, but lately i’ve been digging what i’ve heard by Zapp, Linkwood, Fabrice Lig and I’ve been really into what i’ve heard by a couple of guys who go under the name Duplex. Of course, Kyle Hall is making some great music too and Boxcutter’s latest stuff he has been sending me is great too.”

“The next release is my Journey to the Core of the Unknown Sphere EP which is out on Clone around the end of March. It was mastered last weekend and i’m looking forward to hearing it on vinyl. It features a remix of the title track by Kyle Hall. A lot of the tracks from it are featured in the mix. After that i’m hoping to get to work on the collaboration Kyle and myself are doing for his label. We’ve both got a track each which work great together, but we want to do two collaborative tracks too which is a bit awkward seeing as he’s in Detroit. We’ll find a way…

“Along with those releases I have another few things that are still in the making, but nothing I can really announce yet. All very exciting though!”