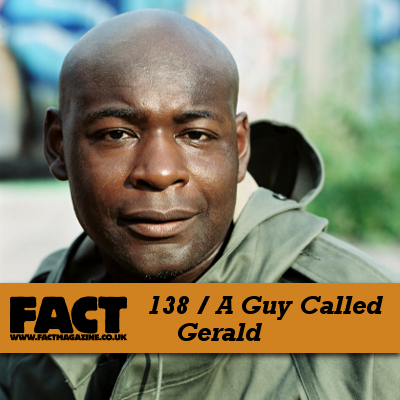 If the name A Guy Called Gerald doesn’t mean anything to you, you ought to be ashamed of yourself.

A founding member of 808 State, Manchester’s Gerald Simpson helped create some of acid house’s most future-rushing and globally successful moments. He worked on the ‘State’s Newbuild LP and Quadrastate EP (home to ‘Pacific State’) before going solo, and hitt #12 in the UK charts with the completely nuts ‘Voodoo Ray’.

Not one to rest on his laurels, Simpson began to embrace influences from the nascent hardcore scene, issuing a number of groundbreaking 12″s on his Juicebox label that culminated in the release of the 1992 album 28 Gun Bad Boy (check the title track for an all-time British soundsystem classic).  He followed in 1995 with the gloriously knotted, soulful and uniquely psychedelic Black Secret Technology, arguably the finest jungle LP ever made.

While many producers of the same vintage have settled for a life of creative water-treading, stuck-in-a-timewarp DJ sets and dodgy film cameos, Gerald has really kept his end up, and then some. Relocating to Berlin some years ago, he has focussed his sound into an instantly recognisable brand of sleek, organic techno, releasing records on labels like Sender and Perlon. Next month he’s set to release Tronic Jazz, his second LP for the Laboratory Instinct imprint, and this Saturday, April 10, he’ll be headlining Feeding Werk, a very special night at Plan B in Brixton, celebrating the sounds of Werk Discs (home to Actress, Lone and Lukid, who’ll all be making appearances, along with Pariah, Dave ID and more). More info on that unmissable night here.

An interview with Gerald can be found on page two.

So why did you go with the title Tronic Jazz for your new album?

Can you explain your ‘Responsive DJing’ technique a little bit?

“It’s a perfect blend of DJing and live production.  It’s straightforward. I’m basically mixing in your face – doing what needs to be done there and then.”

There’s a real analogue feel to your productions; do you have any time for the digital realm at all?

“I was always digital.  I was using software in 1990. My ear is analog and I get smooth fat round sounds from anything. That’s what A Guy Called Gerald is all about.”

Are you still based in Berlin? How – if at all – do you feel living there has impacted on your sound, and your life in general?

“Yes, I’m still here.  It’s the best place for me right now.  It gives me space and time to sharpen skills and experiment in a perfect environment – that’s studiowise…Outside of my studio there are more and more layers of pretentious cunts.  Example: if I go out and I don’t go up to the DJ to introduce myself I get people making racist comments or just taking the piss in general.  They’re quite predictable really. I just think back to the old days when racists had their own music…oh, the good old days…[laughs]”

Your sound in recent years has tended towards streamlined 4/4 house and techno; do you envisage ever revisiting the more breakbeat-oriented sounds you explored on ’28 Gun Bad Boy’ and Black Secret Technology?

“Yes, I still produce jungle but just for myself.  I hate that new rock shit they do now that they’re calling D&B.  As I am English and jungle represents my generation I stay true to form.  My jungle is for family now.”

Are there any new artists whose work you’re feeling? Any music, old or new, that’s been interesting you lately?

“Not really.  I think I have so many of my own ideas to execute and there are so many ‘artists’ out there who are just blagging it. I can’t be arsed anymore with the name vampires that want to cling to something real.”

Any other new projects on the horizon that you can tell us about?

“I just finished a Loopmasters DVD and am preparing for the live tour.”

Are you familiar with the Werk Discs artists? How did you end up playing the Feeding Werk party?

“I haven’t the foggiest who anyone is to tell you the truth.  But if they need something real and freaky they’re barking up the right tree.”