A rare audience with the living legend. 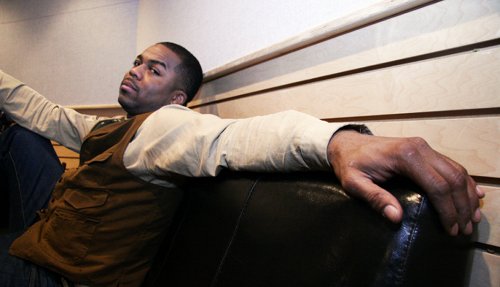 Since the late 1990s Justin Smith has been knocking hip-hop fans and rappers alike for six with his swelling, often emotionally overloaded productions.

Not that Just Blaze just does hip-hop, of course. Last year, he released his first ever house single, remixing Cajmere’s 1992 Chicago classic ‘Brighter Days’. A lengthy DJ mix posted on Blaze’s Soundcloud around the same time featured records like Masters at Work’s ‘Ha Dance’ and DHS’s ‘House of God’, so it’s clear the Jersey boy knows his house history – and his takes on ‘Brighter Days’ were joyful, spiralling house of the highest order. This Thursday, 24 May, Blaze will be spinning at his only UK DJ set of 2012, for Doctor’s Orders at London’s East Village – more information and tickets here. FACT caught up with him on the eve of the gig to talk Jersey record stores, spinning with Jay-Z and more.

I thought it would be interesting to focus – at least first off – on the fact that last year you released your first house single, remixing ‘Brighter Days’. How did that end up happening, and was the original always a favourite of yours?

“That came about from a recording of me playing a house set at a Fool’s Gold party from a few years back. I’d played a bunch of classic Cajual records that night like ‘Flash’, ‘Brighter Days’, and ‘Percolator’. Eventually he and his people got wind and were surprised, as many were, that I played that kind of stuff or that I even knew those records. I was always a Cajual fan so I was honoured that he even asked me to take a stab at a remix.

“I’ve actually always made dance records on the side, but it was really more of a side hobby thing I would entertain when I had a free minute and they usually would never get finished. This was a cool opportunity to actually start and finish one [laughs]. And the fact that it was for someone I grew up hugely influenced by made it that much cooler. I was just happy to be a part of it.”

The remixes had that really nice, organic, unquantised feel to them – is that the kind of dance music that really appeals to you?

“Really I love it all. I grew up spinning classics, disco, deep house, techno, breakbeat, drum and bass, rave, and everything else in between. I don’t really have a favorite sound, I just go with whatever I’m feeling at the time and that’s what I felt then and there. I actually probably had about six remix ideas, the two that [were] released were just the ones I had time to finish. Time permitting I probably would have done an album’s worth of remixes! In terms of the quantizing, I definitely wanted to go for an organic, free form type of sound that had a lot of peaks and valleys that catered to people who actually still go to clubs to dance.”

What did you produce the tracks on? Was it drum machines, synths and sequencer, or are you mostly in the computer?

“Everything is pretty much done in Logic these days. Sometimes I’ll dip into Ableton to do some warping and stretching, but it all goes back into Logic when it’s said and done.”


“I definitely wanted to go for an organic, free form type of sound that catered to people who actually still go to clubs to dance.”

You’re from New Jersey, where there’s obviously quite a big dance music scene. Were you big into house music growing up, or did it come after hip-hop for you?

“I grew up around all sorts of music. From hip-hop to disco to rock, ‘80s pop, new wave and just about everything else. House was the next evolution of disco so it’s all the same lineage to me. I couldn’t think of one record that specifically did it for me. If I had to go back to my earliest recollection of actually mixing house records with one turntable and a tape deck as a kid, it was probably Todd Terry’s ‘A Day in the Life’ and ‘Can You Party?’. After that I think it may have been Maurice’s ‘This is Acid’ and of course ‘I’ll House You’.

Where were you buying the records in Jersey – any particular favourite stores or haunts?

“As a kid I obviously had limited funds and opportunity, but I definitely used to beg my mother to take me to Record City and Eclipse, which were the two local record stores where I grew up in Paterson, NJ. Eventually by the time I hit high school I was in both of those stores every day after school without fail, scouring them and spending hours there. Funny enough I found out maybe 10 years later that me and the manager of Record City were related.

“Omni records in Union City was also big for me when I got older. I also used to order records via mail from Vinyl Mania when I was younger. Hot 97 used to have a show called Planet Tracks. I think the host’s name was Dave Kendall and he would play all of the new electronic music coming from Europe every Sunday night. At the end of each show he would always say “don’t forget you can order these from Vinyl Mania on Carmine Street in NYC.” I was blowing up their phone on a weekly basis after that. I stopped by Vinyl Mania last year. It’s a coffee shop or something now. Sad.” 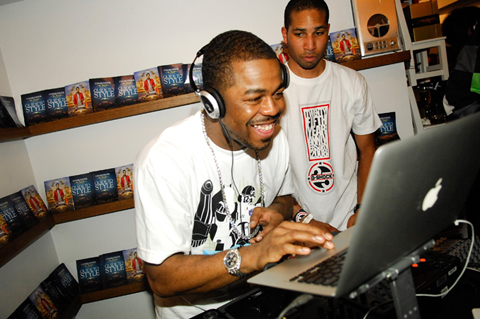 “I stopped by Vinyl Mania last year. It’s a coffee shop or something now. Sad.”

My only experience of you DJing was that mix you posted on Soundcloud. How often do you get a chance to play out with production taking up so much of your time, and do you find you’re generally DJing to crowds who’re open to the sort of stuff you play on that mix – DHS, Masters at Work, etc?

“I’ve been DJing a lot the past couple of years. I randomly got called to do a tour in Japan back in 2004 and I said ‘Why not?’. I was definitely a bit nervous as I hadn’t really played out in a few years and thought maybe I’d lost it. I always maintained my scratching ability, having done it on records I produced, but playing for a crowd and being able to read them and that sort of thing hadn’t been a part of my repertoire for a while. It ended up going great and I fell right back into it. Being able to play a whole set of nothing but records you’ve produced definitely helps! Since then I’ve definitely been spinning more often but I still have to balance that time out with being in the studio making records as well. It’s tough because I love them both, but it’s all part of the hustle.”

What appeals more to you – a solo DJ set, or stage show style DJing with Jay-Z, for example? And do you prefer to DJ to smaller or larger venues?

“I don’t really have a preference, they’re all different beasts. DJing for 40k people with Jay is great, and again some of those records being performed are mine so that’s great, but it’s still his show. It’s a great feeling when you are doing your own performance and take the crowd on that journey with you. As for larger or smaller venues, those are different journeys in themselves and both have advantages. Doing a huge big room can be a raging great time, but smaller intimate venues sometimes allow you to get more personal with the crowd and delve a bit deeper because they’re more likely there to see you personally and take that ride with you.”

A lot of the house music you played on that mix was old – do you check for a lot of new dance stuff? You played ‘Ha Dance’ on that Soundcloud mix, and I could see you being into the ballroom stuff that’s been going on in New York and New Jersey for a minute…

“Interesting thing about that mix, I never planned to release it. If you notice, it’s called “I Got a New Mixer” and that’s really what that was all about. I’d just gotten the Pioneer DJM-2000 and was excited about all the effects and bells and whistles. Some of my friends don’t like it for various reasons, but I like to take a more production-style approach to DJing and it’s a great mixer for that. I was just having fun in my house by myself at 7am and decided to record it. Not realizing I’d be playing for 4 hours.

“After I talked about it on Twitter, people asked me to release it, so I did. As far as the records being old, I think we are all partial to stuff we grew up on, and I was just having fun reliving my earlier days. I did another one with new music but never got around to releasing it.  I don’t get to stay on top of new music as much as I would like to but I definitely make it a point to catch up at least once a month or so. Having the Internet makes that a lot easier. I probably know a few of those ballroom records – I just don’t know that they are “ballroom records”. I tend to shy away from genre labeling. I just buy and play whatever sounds good to me. It probably throws some genre whores off but that’s fine by me.”

Do you have ambitions to release more dance music in the near future? Any concrete plans, even?

“I don’t like to blow whistles prematurely but… there is a pretty concrete plan yes. Stay tuned.”