From the archive: Mosca talks baile funk, techno and more. 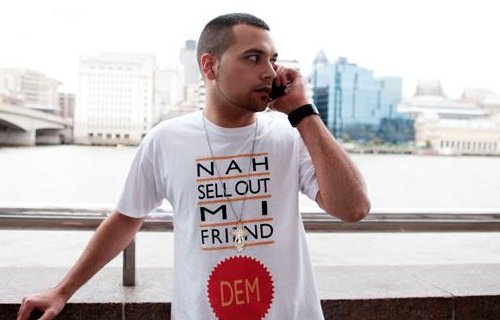 This article was first published in October 2011

For FACT’s latest On Record feature, we caught up with Mosca.

Despite only releasing a handful of records since his January 2010 debut, Mosca’s sense of quality control and refreshing desire to turn his hand to various genres – already we’ve had bassline house, hip-hop, chopped-up vocal garage, Baltimore club, and now, on his forthcoming Wavey EP, 4×4 techno – has seen him rise to the top of his generation of UK producers. As a DJ, you’ll find him drawing records from Angola, Brazil and Jamaica as often as you will those from Europe, Sheffield or London, so we thought he’d be the ideal choice to talk about a record that means a lot to him. He picked Mr. Catra’s Baile Funk hit ‘Vem Nha Nha’.

I hadn’t heard the tune but I recognised the guys name… couldn’t think where from. Then I searched my laptop and realised he’s on a Lil Jon track.

“I can see that. I picked ‘Vem Nha Nha’ because when it came out – on vinyl at least – this was like ’05 or ’06, it kinda opened my eyes of the fact that there’s urban music from all across the globe. I’d been into world music, world beats, from long time, but a lot of it was quite folky. The kinda stuff DJ /Rupture used to mix in his sets.”

Whereas this is pretty hard, with the 808s and the snare rolls and that.

“Exactly. The stuff /Rupture was paying just wasn’t mixable, unless you were a phenomenal DJ, which I wasn’t. Neither am I now. But suddenly baile funk started getting released on vinyl, and I could mix it with grime, niche and whatever. I used to pitch it up to 140 bpm a lot.”

So you were playing harder UK stuff, but didn’t have access to global stuff that went with it?

“Spot on. And it sounds kinda stupid you know, not really knowing that there would be equivilant cultures in other parts of the world. But this was before kuduro, reggaeton, new cumbia, couple decale etc. had made a Western breakthrough.”


“Is it disrespectful to mix zouk drums with kwaito drums? Because it kinda lumps world music into one big category? But then I think fuck that.”

What particular stuff did baile funk getting released open your eyes to in the following years? Like anything that specifically went on to influence your music?

“Like I mentioned, I got into kuduro, reggaeton etc… it was weird how a genre would sweep the globe for a bit. I just got on most of it at the start of those waves, through the Internet mostly, and a couple of other things like gwoka that nobody else picked up on.

“But in terms of it influencing my music, I’m always in two minds. Is it disrespectful to mix zouk drums with kwaito drums? Because it kinda lumps world music into one big category? But then I think fuck that. Music is there to be played with, if you know the difference between say, coupe decale and high life or not, it doesn’t really matter too much as long as you make a track that sounds good.

“So I like to dabble in world beats but try not to make that the overarching ‘point’ of the song if you see what I mean. I’ve done a Baltimore rub of Tempa T but the point wasn’t really to try and pretend I was a B-more producer. I guess you could say my ‘Spartan’ dub broke that rule, but that was a specific request for a dub reggae remix.”

Is that how you think about your new EP [Wavey, on 3024]? Mixing different signifiers of different genres up – though you probably wouldn’t think about it that specifically. Because I guess it’s techno, but there’s a garage swing to it, a bit of a hip-hop bounce on some of it, those kind of cracking, almost grime snares on ‘Orange Jack’.

“Yeah, to an extent. I set out to make techno basically, and I still call it techno. But a lot of techno disappoints me or just misses the mark. And the good stuff I could never come close to making. So I just made what I could.”

It’s weird, ‘cause in a way 4×4 is the easiest way to make something danceable, but then so much techno I’d never dance to, because it’s so straight. Where as the Wavey tracks for example, have a bit more whip to them, a bit of snap, a bit of shuffle.

“Yeah, I can see that. Apart from the grime stuff I make, I think that’s a characteristic running through all Mosca production, that skippiness or groove… can’t believe I just started talking in the third person. But it’s true. I put a lot of time and effort into groove.”

Grime’s kind of an anomaly though, because often the straighter it is, the more danceable it is. But then maybe that’s more brucking out than dancing.


“I think the whole point of this scene without a name was that it didn’t form a genre straight away; there were no rules. Maybe that was too ambitious.”

Is the groove on your tracks something you studied quite specifically? Or was it just practice?

“It takes some practice, obviously. But I knew from the start that I wanted danceable, groove-based tracks, whether it’s garage which kinda needs [groove and swing] to be called garage, or hip-hop, or whatever.”

Was it a case of looking at specific artists or tracks though, and looking at how they achieved a certain groove? And if so, what kind of stuff?

“No, I don’t think it was particular artists. It’s a thread that can run through all types of music, from ‘70s Ethiopian funk to the kind of skippy house that Burnski and Pezzner and people are doing nowadays. And the thing that disappoints me most with the music I get sent today is a lack of rhythm, or the fact that I can hear exactly how it looks on their Logic screen.”

“UK stuff, or stuff that’s supposed to sound UK. Going back to baile funk, it’s a pretty straight beat really, but it has that swing, that groove.”

It does kind of seem like for the first time in a while, UK dance music is more concerned with the elements that make up a track than the actual rhythm of the track. Like it’s further away from garage and jungle than it ever was.

“Amen. That’s a great way to put it. People want to have the 808 drums in there, some 303, a bendy Deadboy synth… rather than focussing on the things that, for me, make a track workable on a floor.

I don’t mean that as some jungle eulogist either… it’s just weird, because genres like jungle, and even half-step dubstep and UK funky were defined by their rhythm. It’s a thread that runs through the history of UK music and now seems to have been forgotten a bit.

“Completely. And house, and reggaeton, and waltz.

“I should probably say something positive about music. The thing is, there’s great music coming from all over the UK. Preditah’s EP is sick, the new Fizzy thing with MJ [Cole]. Some great house, great funky – Carnao, LR Groove… The new Karenn stuff is incredible UK techno. But it’s this whole UK bass music that’s the problem. The people who are bringing good stuff out are the people that have been doing it for years. There’s nothing from new artists.

“But I refuse to believe that UK bass or whatever we’re calling it has stagnated already. I think it’s just hit a little plateau; a few little obstacles.”

It also had a really strong, breakthrough kinda year last year, which is hard to follow.

“Yeah, yeah. All the ‘success’ kinda makes it chaotic. But once it’s found its feet I can see it being great. I think the whole point of this scene without a name was that it didn’t form a genre straight away; there were no rules. Maybe that was too ambitious.”

I guess when you’ve got no rules, you have no walls either… or less of a foundation. So you can achieve more in some ways, but there’ll always be less of a structure to it, it’s less reliable by definition.

“Thinking about it, it’s an incredibly weird thing, on paper at least. No other genre has really set itself up to be this thing where you can do anything. Even free jazz or whatever, it’s limited by the fact that it uses cymbals, bass, whatever. And the fact it always ends up sounding like free jazz.”