“Big and bleak, that’s how I like it.” Five minutes with Roly Porter

Roly Porter, the man once best known as one half of Bristol dubstep tag team Vex’d, has thoroughly reinvented himself.

Last year’s Aftertime, his debut solo album, did away with dance tropes entirely in order to pursue a unique and convincing vision of dark ambient, noise and neo-classical composition – though the presence, indeed prominence, of massive sub-bass betrays Porter’s soundsystem heritage. This year he’s been working on film scores and the follow-up proper to Aftertime, as well as bringing his music into a live setting – as well as solo shows, he has worked with the likes of light/video artist Flicker and Cynthia Millar. A recording of Fall Back, a long piece which Porter created with Millar (who plays Ondes Martenot and Dobro, two huge, 1928-patented instruments) for an Aldeburgh Music-commissioned performance, is released this week.

Ahead of his show at Austria’s Elevate festival this weekend, FACT spoke to Roly about the follow-up to Aftertime, his aspirations for future live performances, and more.

“With Aftertime, I had no pressure from anywhere – label, genre, public, nothing – and I love that.”

What have you been up to since the release of Aftertime?

“I’ve done a couple of remixes which were both pretty good fun, a kind of noisy antidote to Aftertime. I’ve also been working on a couple of film scores. One is finished, the other underway. It has taken up a surprising amount of time, definitely a learning curve in a lot of ways. It’s something I’ve always wanted to do and definitely hope to do again but it made me realise what a privilege it is to write music for yourself. With Aftertime, for example, I had no pressure from anywhere – label, genre, public, nothing – and I love that.”

Were you pleased with how that album was received? Do you feel like you’ve entered a new phase of your career and artistic life now?

“Yes, really pleased. Amazed. So grateful to everyone who supported it. And yeah, I suppose I do feel like I am in a new phase of my life with music but at the same time I don’t want to think about that too much as I am very aware of the dangers of becoming stuck in a mode.”

It seems you and your Subtext colleagues (Emptyset, Paul Jebanaisam) have all come of age at a similar time, all doing something arguably quite different musically to what you began doing. How would you describe the evolution of the Subtext family over the years, and is collaboration (be it musical, visual or simply logistical) among its members an important thing?

“It’s really exciting to hear what they are all up to. There is a sense of collaboration, the music is all very different but clearly works together. One of the best things for me is being able to get 100% honest feedback about my music, whether that’s a new tune or playing live or whatever, and we each give that out in a way that for me is really supportive, even if everyone is saying a tune sounds like shit. It’s also the case, certainly for me and I would guess also for the others, that each of our current projects is probably the most heartfelt, certainly the closest to where we want to be now.”

“I once read that Lee Perry would stand behind musicians and hit them on the head with a drumstick while they played. That’s the kind of role I’m looking for.”

Are there any other contemporary artists, producers or labels that you’re particularly interested in or fond of at the moment?

“I always answer this question nervously by saying I don’t know, or that I only listen to music from before I was born, or that I haven’t been listening to music at all, but actually for the first time in ages there seems to be loads of music about that is really exciting. I’m still not going to list anyone, but – definitely in ambient music at least – I think this is a very productive and exciting time.” 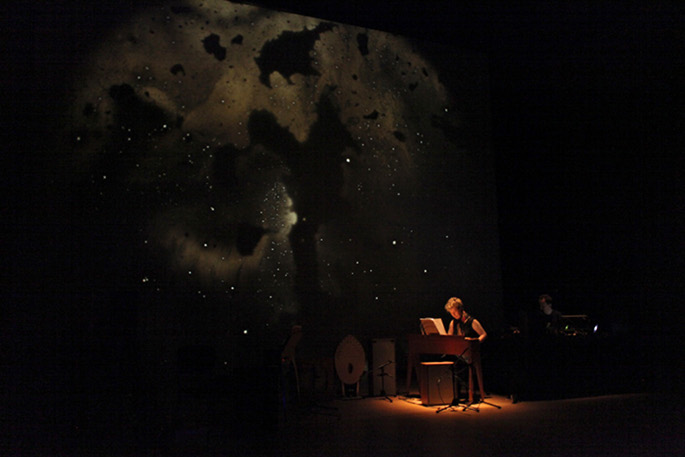 You recently performed with Flicker – can you tell us more about that partnership and how it works, and what it brings to your music in the live setting?

“Yeah, we’ve done a few shows together, starting with a commission by Alderburgh Music for a piece called Fall Back – the CD is out this week. It’s hard to explain what it is he does, but it’s more down the installation route than traditional video, he doesn’t bring a laptop with him. The result is a very slow, heavy, meditative image, usually using things like coal or polystyrene as the source material but then the scale of the projection gives them a kind of otherworldly feel. It’s big and bleak – and that’s how I like it…”

“In ambient music at least, I think this is a very productive and exciting time.”

How has your approach to live performance changed or developed in recent times? Have you arrived at a set-up and approach you’re happy with, or is it something you’re always looking to improve and expand?

“No, always wanting to improve or change. I’m happy with the way things are at the moment, there’s room for me to try out new or different ideas each time, but the thing that I would most like to change, and I spend a lot of time thinking about, is how to involve more people but retain complete control – like a kind of composer-dictator. I once read that Lee Perry would stand behind musicians and hit them on the head with a drumstick while they played. That’s the kind of role I’m looking for.”

You’re appearing as part of a Small But Hard showcase at Elevate; what’s your relationship to them?

Are you working on new material? What can we expect from it?

“Yes, the next [album] is underway. All I can say is that it will be very different from Aftertime. That’s the only limitation I set myself.”