“Get to know it, and you won’t want to rip it off.” Fade to Mind’s Rizzla on humanizing the exotic 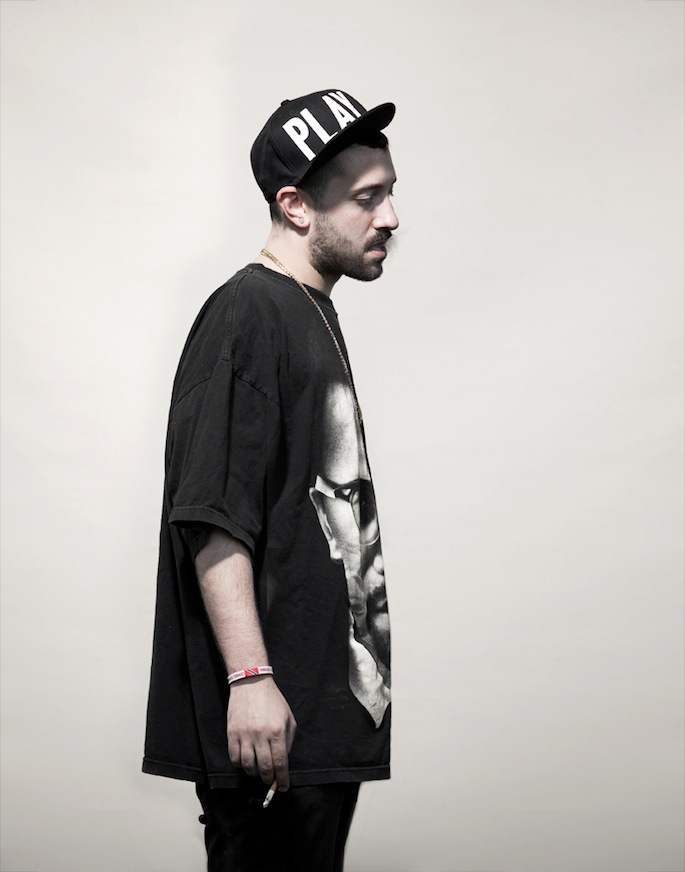 From fusing Southern trap rap with EDM sensibilities, to mining global bass subcultures, to nodding to vogue house without stepping inside the ballroom, appropriation is the dance music world’s watchword.

One artist uniquely positioned to offer an informed opinion on the topic is Fade to Mind affiliate Rizzla (aka Brian Friedberg). After studying sociology and film, he received his Master’s in Cultural Production, focusing on global queer issues, Caribbean visual art, and vogue culture; his dissertation examined Masters at Work’s ballroom touchstone ‘The Ha Dance’ as an art object.

As a musician, Friedberg’s productions are a kaleidoscopic view of dance music from across the globe: a frenetic mix of hard house, vogue swing and Caribbean beats that he and his cohort describe as ‘kunq’. “For better or worse, we’re all influenced by shitty tribal gay house,” he admits. “Hilariously enough, a lot of those intros sound like UK funky.”

“I was chasing the idea of the euphoria of Caribbean music but with a darker electronic influence.”

His style evolved from his experiences throwing college parties for a diverse list of cultural houses. “I was trying to play weirder music and pop and Caribbean-style music,” he says, “so my production technique came out of making edits.” While he anticipated the tropical-electronic sound that producers like Dubbel Dutch and Murlo would eventually develop, it was an “anemic little field” at the time. “I was chasing the idea of the euphoria of Caribbean music but with a darker electronic influence.”

While drawing from the Caribbean sounds he had immersed himself in during a year-long college exchange program in Trinidad, he was also engaged in the “very small, very mean little ball scene” of Hartford. This was nearly a decade ago, when Vjuan Allure and MikeQ mixtapes were being chopped up into “garbled messes” and uploaded to imeem. “That was always very inspiring because it was high energy and vicious,” he remembers. Playing Latin gay nights allowed him to mash all of his influences, as he could mix Masters at Work, reggaeton, hip-hop, dancehall, and vogue beats, with a touch of hard house. “I was also a raver at the same time; I wanted things at 200bpm.”

As he’s grown as a producer, his focus has been on creating tracks with narrative elements, rather than replicating existing genres. “If a song of mine doesn’t have a story, no one is gonna hear it. Even if I don’t explicitly state them, I try to write stories for each track that I make,” he explains. “Even mood-wise, they can get very bi-polar: some tracks I make are really saccharine happy hardcore, ‘everything’s gonna be great, embrace the sunshine,’ and others you’re getting burned alive in some cave in St. Thomas,” he laughs.

“With the ‘Harlem Shake’, my first thought was poor Baauer. Does anyone really think this dude meant to make a politically problematic, copycatted, crackerfication of hip-hop?”

A word not usually associated with free-wheeling club music is accountability, but for Friedberg, it’s a guiding principle. “I feel like holding yourself accountable for originality is essential nowadays, because it’s so easy to be influenced by everything around you,” he says. “People don’t ask themselves ‘why?’ enough. ‘Why did I make this? why should it be in the public domain?’ There are so many people that are technical wizards making ‘genre of the day rip-offs’: kids with great ears and trained fingers that don’t necessarily have anything to add to the conversation.”

Despite the sound and the fury of such ‘genre of the day rip-offs’, he dismisses the move to “problematize” copying. “For years, there’s been derivative tech-house and derivative hip-hop, or derivative jazz for God’s sake,” he says. “With the ‘Harlem Shake’, my first thought was, “poor Baauer.” Does anyone really think this dude meant to make a politically problematic, copycatted, crackerfication of hip-hop? He didn’t mean to do that, that’s all these idiots on the Internet.”

“Products get out of creators control so quickly,” he explains, launching into a larger point about the ballroom world. “That’s what people were afraid of with vogue music, but the people who created it are getting credit for creating it,” he says, and he has a point: it might have taken a few years, but the Vjuan Allures and MikeQs of the world are in-demand across the globe. “After that point, it’s free culture. It’s only a problem if creators are cut out of their own story… Who am I as a friend of the sound to feel protective of it? That’s a lot of old DJ culture that needs to be confronted.” 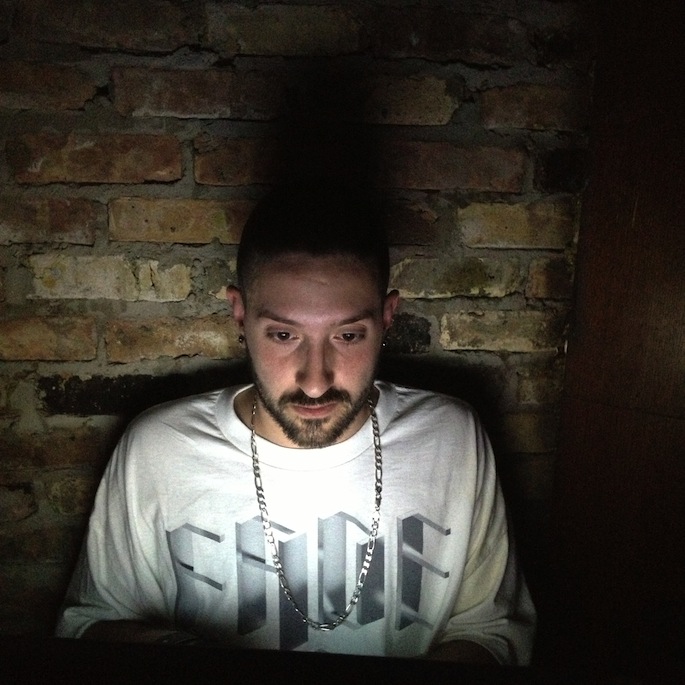 “It’s good that there are codes of conduct that have been negotiated over the years by people like Wayne Marshall and DJ /Rupture, these ethics of cross-cultural dialogue,” he admits. “There’s the academic response and then there’s the creative response. I’m happy that I’ve been trained in the academic way to understand reappropriation and all those things, but for me, I’d rather make a song that says all this, too.”

Creatively, this has resulted in songs that deal with issues both cultural and personal. “Some of the titles of my songs have secret gay references making fun of gay tropes I’m tired of, like songs about racism in online dating,” he admits. “But they’re also hidden in the songs and not necessarily spelled out. Hopefully, that kind of storytelling in club music is going to become important. Maybe the reaction against copycat genres is creating little fantasy narratives.”

So, if vogue music is safe, what about dance music from around the world? “A lot of these global scenes have their trendy bass moments, like kuduro and baile funk had their moments,” he acknowledges. Because of the preponderance of social networks, he believes fans are able to follow artists instead of keying in on specific scenes, giving the artists longevity even after cultural tourists have moved onto the next trend. But it takes some work on the part of the audience.

“I find the best way to contextualize these sounds is, rather than to play a set entirely of one regional sound in a language you don’t understand, mix it in with what makes you you… It’s about humanizing what you’re listening to, getting to know about the artist you’re playing,” he says. “Get to know it, and you won’t want to rip it off.”

Friedberg finds the underlying problem with focusing on trendy sounds rather than the actual artists is that it tends to fetishize the foreign. “Is this shit exotic to you? Then get to know it better and de-exoticize it, make it familiar, make it everyday,” he advises. “With Spanish, Caribbean music from Puerto Rico and the Dominican, if you’re in a major city with those populations, that’s not exotic! You hear it out of car windows and out of apartments all the fucking time.”

“The sociologist in me believes that meritocracy on a grand, global scale is impossible to achieve with differences in power. But culturally, we should aspire to meritocracy.” It’s an academic point, but one easily applied: “It doesn’t matter where you’re drawing your influences from, as long as you’re being transparent enough to pay tribute or you’re personalizing the sound so deeply that you’re not exoticizing it.” Or, even more blunty: “With social media, you can educate yourself, and if you don’t feel like you should educate yourself, then you shouldn’t be doing what you’re doing,” he laughs.

Newcomers to electronic dance music may be “stepping in the wrong places,” but he thinks part of the problem will solve itself. “I think people who created the products in the first place are going to start building better fences, so instead of having a third party interjecting, the people getting ripped off are going to be able to defend themselves.”

Meanwhile, he has found a home with his Fade to Mind compatriots, none of whom are strangers to paying tribute to underground scenes, from both home and abroad. He names Kingdom as his number one supporter, explaining that he put together the imprint by gathering a collective of mutual influencers. “It’s a new family based on friendships that we already had,” he says; Friedberg had attended MikeQ’s parties for years, and he already knew Massacooramaan from the Internet. His next release for the label, following last year’s raucous bootleg EP, will find him experimenting with new sounds and demonstrating a maturation of his production skills. He also has collaborative efforts with fellow Kunq-masters Blk.adonis and False Witness in the works.

Whatever is next, it all comes back to the idea of a conversation, between innovators and newcomers, between queer audiences and straight ones. “‘Alternative gays’ are a tiny part of the population, so if that’s going to be your whole market, good luck. Why don’t you start the conversation with the heterosexual masses?” he suggests. “I’ve never been into gay separatism or anything like that. What I define as my queer scene is a combination of transgendered folks in both directions, guys, girls, straight people, whatever: it’s more about that dialogue, that’s what gets us off.”

Page 1 of 2
Tags: Fade to MindKingdomRizzla