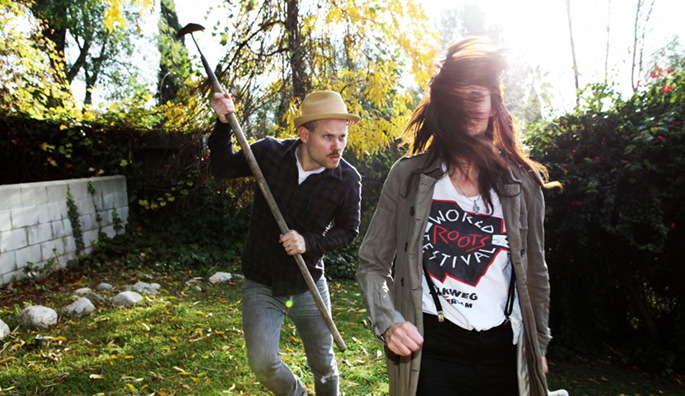 There is an experience of time travel that we have all become accustomed to. That strange sense of temporal distortion we experience when talking to someone on the the other side of the world.

When I talked with Rainbow Arabia, I was about to have my dinner, then to go out to a concert. In Los Angeles, husband and wife Danny and Tiffany Preston were just starting the day. Danny was drinking coffee, eating a bagel, their two dogs “nosing in”. Tiffany was just waking up, “a little hungover” she admitted. Last night she had been out watching Skin Town, a local r’n’b group soon to release their debut on Time No Place, the label the Prestons run with label manager Tim Jones.

And then there is the way music can send us travelling through time. Rainbow Arabia’s new album, FM Sushi, saw Danny, in particular, going “back to music I grew up on like Depeche Mode, OMD, Pet Shop Boys, New Order.” Yet throughout the Time No Place website, we find repeated reference to futurism and to the Future – what William Gibson once called the Big F Future, something the author claimed had disappeared from our collective imagination. “I would like to contribute to Futurism with our music,” Danny says when I ask him about these references, “– but I’m not sure what elements that would entail.” It’s a refreshingly frank answer. “Its kind of a mix,” he says “of past music to future music to create a fresh sound.” I am reminded of an image from their website: “Two musical vectors simultaneously approach 1985 and 2025, intersecting briefly in the present.” 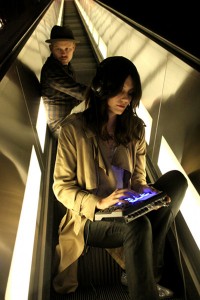 Danny and Tiffany met around the turn of the millennium and married four years later. They had both played in various groups before: he playing keyboards for Wiskey Biscuit and Future Pigeon, she playing guitar in Pink Grenade and Licorice Piglet. After the wedding, they never thought at first to make music together, but as they drifted apart from their previous groups they started experimenting with some recordings at home. It was the purchase of a Casio AT-1 with microtonal scales and Arabian beats that brought the sound of Rainbow Arabia together. The sound, that is, of their first EPs and debut album: all amped up homages to Omar Souleyman, electro-arabesques, and fevered panglobal polyrhythms.

“Without change, something inside us sleeps and seldom awakens. The sleeper must awaken.”

In the two years since the release of that debut, Boys and Diamonds, however, they have been writing, thinking, “looking on how to execute this new sound we had in mind,” as Danny puts it. The result is FM Sushi, a night ride through the American metropolis beset by smog clouds of synthesizers and plenty of Voigt’s beloved four-on-the-floor beats. It wasn’t so much a “conscious decision” Danny insists, to steer away from what they were doing before, “we have always been into lots of different music and go into phases of obsession.” As the Duke Leto Atriedes says in Dune, “Without change, something inside us sleeps and seldom awakens. The sleeper must awaken.”

This transformation was aided and accelerated by the addition of the group’s new member, Dylan Ryan (also of Cursive, Herculaneum, Ether Feather, and Icy Demons). “It’s easy to vibe with Dylan,” Tiffany tells me, “that’s why he’s in five bands.” The Prestons met Ryan in France, at an Icy Demons gig. “We hit it off and he came to Los Angeles and house sat for us,” Danny explains. “Once he decided to move here, we asked if he would be interested in playing with us. He was into the new vibe and fun to work with.”

As they set about working on the songs that would eventually make up FM Sushi, Ryan lived at the Prestons’ home. “Our musical lives and domestic lives were all as one,” Danny tells me, “dinner together at night, fresh juice and yoga.” And when Danny went off to his day job as a private jet broker (“kind of a strange job,” he admits), Dylan and Tiffany would, “drink coffee,” she says “and watch David Lee Roth interviews.” So intertwined are Rainbow Arabia’s private lives with their musical lives that when I ask, at the end of the interview, what plans they have for the future, Tiffany immediately replies, “trying to make a baby and another record.”

In that order? I ask.

“Me and her were on a Dungeons and Dragons campaign for like three years. She also had a public access show called Dungeon Majesty where she re-enacted D&D adventures. She goes by Mystika.”

As we’re chatting, she sends me some screengrabs from the video they’ve just finished shooting, for ‘Lacking Risk’, the album’s silky neon dream of a fourth track. Tiffany tells me the theme of the video is “sorta Blade Runner – Los Angeles nights” but the costumes look like a cross between the hooded gowns of the Bene Gesserit sisterhood and the bodybag PVC suits of the Spacing Guild in Dune. The video was directed by the artist and photographer, Jennifer Juniper Stratford, whose YouTube science fiction series The Multinauts, features an intergalactic warlord called Oysters Rockafeller. “Me and her were on a Dungeons and Dragons campaign for like three years,” Danny explains. “She also had a public access show called Dungeon Majesty where she re-enacted D&D adventures. She goes by Mystika.” 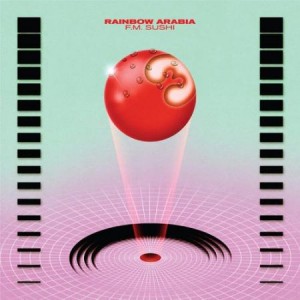 The shimmering neon futureshock continues on the record’s sleeve [left], designed by Robert Beatty, a musician and multimedia artist from Lexington, Kentucky, who also plays with the noise group Hair Police. “I gave him the title of the record and told him to think light colours, space, 80’s New York,” TIffany tells me. As for the album’s title, FM Sushi, the FM refers to the frequency modulation method of sound synthesis, invented by John Chowning at Stanford in the late 60s, later the basis for most 80s keyboards, starting with Yamaha’s groundbreaking DX7. “We primarily used FM sounds on the record,” Danny says. “So, some Raw FM sounds that resemble being at a Sushi restaurant in 1985 New York.”

Time and space fold into each other again. New York in 1985, LA in 2013, and in 2025 – the outer reaches of the galaxy, towards Delta Pavonis and Caladan, home planet of the House Atreides. Danny Preston talks to me about weirding modules, “weapons that you hum or shout sound into to create a powerful sound wave that can destroy things.” In Dune, the weirding modules are the secret weapon of the House Atreides. “Some thoughts have a certain sound, that being the equivalent to a form,” Paul Atreides explains to the Fremen as he shatters an obelisk with a single shout through one of the modules, “Through sound and motion you will be able to paralyse nerves, shatter bones, set fires, suffocate an enemy or burst his organs.” Danny tells me he had been thinking about “what kind of power that would have if our influences were played through a module, like putting the Miami Vice theme through a weirding module may be catastrophic.”

There need be no contradiction between domestic bliss and intergalactic dreams, between 80s synths and futurist aims. The key is all in the weirding modules; vectors of the strange at the heart of the familiar that contort sounds and fold space and time. Rainbow Arabia the band, the studio in their home, Danny and Tiffany and Dylan themselves, are all weirding modules and they are here to take us on a journey. Destination: unknown.